Shrouded in a cloak of mystery, likely cloistered in a tricked-out Parisian garret, Donda — Kanye West’s startup to end all startups — exists.

That’s pretty much all we know, based on a passing mention of the “creative agency that oversees his nonmusical ventures” in a recent W profile of Mr. West.

The agency’s only mentioned as a means of identifying Virgil Abloh, Mr. West’s “close collaborator at Donda,” in the W profile. Mr. Abloh also acts as Mr. West’s totally crucial full-time style adviser, according to this YouTube video from Chicago magazine.

We first got wind of Donda, which is named for the rapper’s late mother, when Mr. West went on an epic Twitter rant in January 2012. He declared:

I am assembling a team of architects, graphic designers, directors musicians, producers, AnRs, writers, publicist, social media experts, app guys, managers, car designers, clothing designers, DJs, video game designers, publishers, tech guys, lawyers, bankers, nutritionist, doctors, scientist,teachers. DONDA will be comprised of over 22 divisions with a goal to make products and experiences that people want and can afford. I want to put creatives in a room together with like minds that are all waaaay doper than me. We want to help simplify and aesthetically improve everything we see hear, touch, taste and feel… To dream of, create, advertise and produce products driven equally by emotional want and utilitarian need.. To marry our wants and needs.

After Mr. West deleted all his tweets, we didn’t hear another peep about Donda — aside from an online hoax. The company doesn’t appear to have an official web presence.

So what goes on chez Donda on the daily, aside from Mr. Abloh picking out Mr. West’s outfits? Mr. West’s post as creative director for The Jetsons movie seems like a perfect fit for the agency, as does his burgeoning side gig as a fashion designer, detailed in the W piece.

Mr. Abloh insists Mr. West is “one meeting away from becoming Walt Disney,” so keep your fingers crossed for a KanyeLand amusement park. We’ll be first in line for the interactive “Monster” ride. 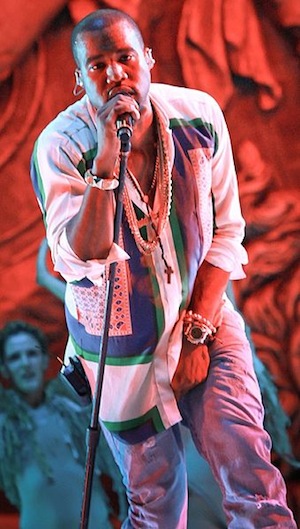