Peekaboo? The city’s gonna fine you…

Hundreds of New York City restaurants would rather hide their letter grade and pay a $1,000 fine than display their less-than-stellar ranking, according to a CBS investigation.

Over five percent of the city’s 24,000 restaurants have been hit by the fine, which is levied for failing to post letter grades in storefronts.

Much like a teenager hiding grades from their parents, the offending restaurants were generally poorly graded by the health department.

According to CBS’s report, 55 percent of the restaurants who were fined had received the lowest grade of a C.

Yet in the highly competitive restaurant business, anything but an A can put a restaurant out.

“We often see restaurants getting B’s going out of business simply because of market forces,” Andrew Mosel, a spokesperson for the New York State Restaurant Association, told The Observer earlier this month.

A lot of restaurants see a fine as a better business move than displaying their poor grade. One manager told CBS it ruins business and “I’d rather take the fine.”

More surprising than poor restaurants hiding their grades is the fact that 30 restaurants who received an A have been fined for not displaying their certificate, according to the report. 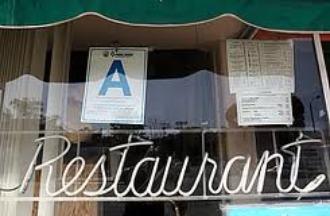