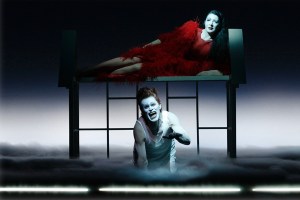 Performance still from The Life and Death of Marina Abramovic. (Photo by Lucie Jansch, courtesy luminatofestival.com)

Here is a video of avant-garde director Robert Wilson and Willem Dafoe in conversation with The New York Times‘ John Rockwell. The interview is pegged to Mr. Wilson’s adaptation of The Life and Death of Marina Abramovic, an autobiographical play about the titular artist featuring Mr. Dafoe, which had its North American debut last week at the Luminato Festival in Toronto. (The video is introduced with the comment that “even Taylor Swift didn’t get as big an applause as Willem Dafoe when he came on stage.” Fair enough.)

The talk is quite in-depth, but here’s one highlight where Mr. Wilson talks about his directing style:

“In 45 years…I’ve never ever told an actor or singer what to think. I give formal directions. Quicker, slower, look a little higher, turn your head a little bit to the right…I give a frame a form, and the filling in is up to the actor.”

For his part, Mr. Dafoe adds, “I respond much more to doing things rather than interpreting things.”