Our story unfolds in the Upper East Side as a taxi attempts to leave its spot. Two men competing for the precious parking space decide that fighting is the best course of action.

Despite their ferocity, they exchange mostly empty blows for about 30 seconds, until they return back to their respective cars. These two adults are far too mature to continue fighting over one of thousands of New York City’s parking spaces. Just kidding!

When the front car tries to pull up so he can parallel park into the spot, the rear combatant pulls within inches of his back bumper, blocking his chance to park.

A third contender for the most obnoxious person in the video comes in at about 1:45, when an elderly woman decides that her red Porsche hasn’t exercised its horn nearly enough recently. She lays it on for about 15 seconds, because they didn’t get the message for the first ten.

Eventually a van pulls out and allows the front car to pull into his spot that he so desperately needed. But the man in the second car doesn’t go quietly. He pulls up really close to the first car to give him a little piece of his mind.

We’re sure he wished his new friend a great New York day. 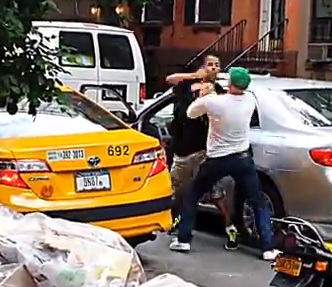