Artist Sarah Charlesworth, whose trenchant work investigated pop culture by borrowing from and tweaking its imagery, died of a brain aneurysm yesterday, according to her New York gallery, Susan Inglett. She was 66.

Ms. Charlesworth is perhaps best known for her “Modern History” series, which she made from 1977 to 1979 by producing photographs of the front pages of various newspapers, typically excising all the content except the nameplate and photographs. In some pieces she followed one newspaper for a number of days, showing how its contents changed over time. In others, she sampled numerous papers on the same day, looking at how different outlets selected and presented images for the day’s news. For one of her most iconic pieces from that series, April 21, 1978 (1978), she printed 45 newspaper covers that featured versions of a photograph of Italian Prime Minister Aldo Moro after being kidnapped by the Red Bridge.

Looking closely at the visual language of the mass media, Ms. Charlesworth’s works in the late 1970s and early ’80s shared concerns with those of artists like Sherrie Levine, Richard Prince, Laurie Simmons and Jack Goldstein, who came to be referred to as the “Pictures Generation,” after a 1977 show organized by art critic Douglas Crimp at Artists Space. In 2009, she was included in an exhibition about that group of artists at the Metropolitan Museum of Art.

Ms. Charlesworth was born in East Orange, N.J. in 1947, and graduated from New York’s Barnard College in 1969, where she studied with Douglas Huebler, the conceptual artist who famously stated, “The world is full of objects, more or less interesting; I do not wish to add any more.” Her undergraduate thesis took the form of a visual study of the Guggenheim Museum in 50 prints, sans text.

Conceptual art proved an early and enduring interest for Ms. Charlesworth, who cited the 1968 Xerox Book, an exhibition organized by the late curator Seth Siegelaub in the form of a publication, as an inspiration. In 1975, she worked with Joseph Kosuth, whose work had appeared in the show, and others to edit the fiercely theoretical art magazine The Fox. It ran for three issues. For the first issue she wrote an essay titled “A Declaration of Dependence,” in which she addressed many of the critical issues that would motivate her art for years to come. “We have lost touch—not only with ourselves and with each other but with the culture of which we are a part,” she wrote. “It is only by confronting the problem of our alienation, making this the subject of our work, that our ideals take on new meaning.”

“I thought she was the most forbidding, foreboding artist I had ever seen. Very intimidating,” Ms. Simmons told The Observer. She recalled seeing Ms. Charlesworth and Mr. Kosuth around New York in the 1970s, both with blond hair and dressed in black. “Once we became friends in the early ’80s I realized once you became friends with Sarah that was that,” she said. “You were friends, and that would never change. She was the most loyal, noble, wonderful friend.”

She is survived by two children, Nick and Lucy Poe. She and the director and screenwriter Amos Poe are divorced. “When I met her [in the late 1970s],” Mr. Poe said today, “I think my first question was like, ‘Wow, who buys this stuff?’ And she said, ‘Nobody, it’s not about selling this stuff, this is conceptual art.” He added, “Her life was her art and her family. And she had exquisite visual sense and moral sense. She believed that aesthetics was morality. She lived her life that way.”

She had more than 40 one-person shows over the course of her career, including a traveling retrospective that was organized by SITE, in Santa Fe, N.M. in 1997. She appeared in the 1985 Whitney Biennial, the 1986 Venice Biennale and the 1992 Sydney Biennial, and her work is held in the collections of numerous museums, including the Met, the Los Angeles County Museum of Art, Moderna Museet in Stockholm and the Museum of Fine Arts, Boston.

Just last month the Museum of Modern Art acquired a major “Modern History” piece from 1979, Movie-Television-News-History, made of 27 prints showing papers the day after the murder of television journalist Bill Stewart by the Nicaraguan National Guard, with the newspaper images pulled from a film taken by Stewart’s cameraman. “It’s about mediation on several levels,” MoMA Associate Curator Eva Respini said.  “It really resonates with what is happening today, if you think about news from Syria…and it really resonates in terms of how we today think about how war is reported, and the way we remember and historicize violence and war. This is a piece from 1979 that feels absolutely contemporary.”

Ms. Charlesworth had 13 solo shows at New York galleries, most recently at Susan Inglett in 2012. On June 21, the Baldwin Gallery, in Aspen, Colo. opened a show of work from the same series shown at Inglett. It runs through July 21. She also taught extensively, Ms. Respini noted, working with generations of students at the School of Visual Arts in New York and the Rhode Island School of Design in Providence. In 2012 she was named a professor at Princeton’s Lewis Center for the Arts.

Like the “Modern History” works, much of Ms. Charlesworth’s art is bracingly deadpan, exemplified by a 1980 series called “Stills” that consists of images culled from the media of people jumping from buildings to escape fires or to commit suicide. But she often coupled her criticality with a sly humor and an exacting, alluring beauty, as in the 1983–88 series “Objects of Desire,” for which she cut out items from magazines, ranging from dresses and bowls to bondage gear and classical statues, which she then rephotographed and printed on solid fields of color that matched their frames. “The idea…was that standing behind any individual’s identity or the way in which we position ourselves in the world, there is a whole set of pre-articulated possibilities of what is sexy or powerful,” she told the artist Sara VanDerBeek in 2007, describing that series.

“Sarah really thought that her work was self-evident,” Mr. Hickey said. “To her credit, she didn’t go around explaining that it was interrogating spectacle, or anything like that. All of her things look great, but you know why they look great—you know what darker part of your personality they were appealing to.”

Later she shot images herself, and looked to a wider variety of sources for material, like Renaissance paintings and drawings in the case of photographed collages that she made in the early 1990s.

Her influence can be seen in facets of the work of numerous younger artists, including the peculiar still lifes of Elad Lassry (which are often ensconced in colored frames that match their backgrounds), the manipulated found imagery of Sara Greenberger Rafferty and Ms. VanDerBeek’s intricate photographic constructions and somber still lifes.

“Artists these days use images from found sources,” Ms. Respini said. “It’s de facto. It’s no longer a statement, it’s just how artists work today. She is really influential in the sense that she pioneered the use of found images in really interesting ways, to think about how we as a culture reflect on this very image-saturated society.”

“Her work possessed an unreal kind of beauty,” Ms. Simmons said. “It is magical and transformative. Everything she did was based on a really rigorous system and way of thinking.”

Update, June 27: The cause of Ms. Charlesworth’s death has been updated. 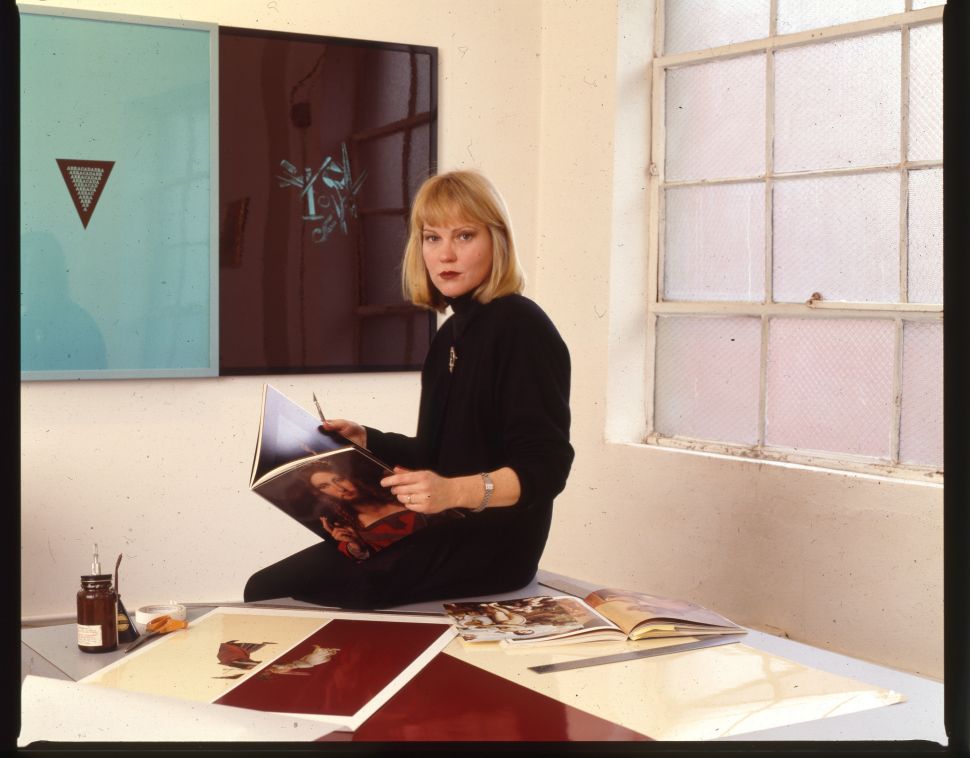