Two huge egg-shaped seats greet you at the Union Square office of the Rockwell Group. Suspended by a rope from the ceiling, and made of paper, hand-dyed and stitched for a leathery look, they are replicas of the lobby chairs the firm made for a hotel in Puerto Rico. To the visitor, they seem to say: “Don’t wait. Swing!” More to the point, their charming whimsy announces: “Imagination Starts Here.”

The theatricality, technology and high-end craft that distinguish these endeavors come from the top—from the company’s founder and CEO, David Rockwell, 56—especially the theatricality. This year he has earned the distinction of being the only scenic designer with two Tony nominations: Kinky Boots in the musical category, and Lucky Guy among the straight plays.

Perhaps his sense of theater stems from having a mom who danced in vaudeville. During his childhood in New Jersey, she ran The Deal Players in Deal, N.J., a community theater “right out of Waiting for Guffman,” as he says, and cast him in kid roles (The King and I, of course) or had him paint scenery.

A tall, authoritative figure, Mr. Rockwell looks vaguely like the stern father who advises his son not to go into show business; in reality, he is anything but. His rugged face gives way to an easy smile, especially when he speaks about his work.

“I think I need to do this because it’s where my heart is,” Mr. Rockwell says. “I realize how rare it is to do what you love and do it with people you love, but I also work very hard at it. I always stayed with the thing I loved.”

Interestingly, and cleverly, he established his name and beachhead in architecture before he swallowed hard and surrendered to theater. And he did even that cautiously, taking a year off from school to work as a draftsman for lighting designer Roger Morgan, gaining his first real immersion in theatre.

Jules Fisher, a Lucky Guy co-worker and pal for 35 years, was the first to nudge him toward the theater when they were budding young architects together: “I just said, ‘David, you can do it. If you can apply your artistic taste to scenic design, you’ll make it.’ In fact, I’m even encouraging him to produce, which I think he’ll do in the future.”

Not one to just plunge in, Mr. Rockwell met with directors for four or five years before hitting to the stage with the 2000 revival of The Rocky Horror Show. Notably, he triumphed over the difficult theater-in-the-round at Circle in the Square with movable bleachers that made a theater-within-a-theater. It was clear a Young Man With Ideas had arrived.

Mr. Rockwell found his lifelong professional idol the first time he went to Broadway. The show was Fiddler on the Roof, and the designer was the great Boris Aronson, who occupies a place of prominence on his bookshelves. Some of the books are the gifts of Lisa Jalowetz Aronson, his widow who died April 18, on her 93rd birthday.

The most conspicuous of the tchotchkes randomly rounding off his shelves is his 2010 Emmy for Outstanding Art Direction for Variety, Music or Nonfiction Programming. Rockwell earned it with his design for the first Oscarcast in its new Kodak Theater home. What makes it even more extraordinary—and speaks to the many facets of his talent, is that Mr. Rockwell, the architect, had also built the theater.  “It was quite a surreal experience,” he marvels, “13 years after designing that theater, to work in it as a production designer.”

Other knick-knacks in his office give a glimmer of the kid inside this accomplished man, with his kaleidoscope collection arguably being the hardest evidence. Some 20 versions of the toy are displayed on the shelf directly across from his desk, and an additional 30 remain at home, waiting to be rotated. Signs of other, actual children adorn the office wall. Amid the sketches and miniature models from shows are the fanciful drawings of Mr. Rockwell’s two children, 13-year-old Sam and 11-year-old Lola, who seem to be showing early signs of talent in the family business. Lola appears to be going through an ant-monster phase, having moved on from her bunny period. But she left a note from that phase: “Rabbits are one of the cutest animals around, with their long ears, expressive faces and spry hops.”

These days, Mr. Rockwell is very much the weekend family man, summering with his wife, Marcia Kirkley, a landscape designer and film producer, and their kids at their summer place in New Paltz. Rock-climbers are very much in-season in New Paltz, but Mr. Rockwell is not one of them. He prefers to unwind in a less risky way.

“The truth of the matter is that I’m more of an active relaxer,” he says. “Lots of walking is relaxing for me. If I’m having dinner and talking to a director, that’s relaxation to me, because I’m engaged.”

He also works out about five days a week. After dropping the kids off at school, going to the gym for an hour starts the day off in a much smoother fashion.

“It cleans your head a bit,” he says. “I wouldn’t say I am a moderate person, so working out for me is like an act of meditation. There’s no question it gives me freshness and energy. The morning the Tony nominations were going to be announced, I decided not to obsess about it and went to the gym. It’s been a great year for design, and there’s been a lot of great work out there. Just after I started exercising, I got a text saying, ‘Congratulations!’ It made it a much better workout!”

Nothing if Not Thorough

No matter what the project, the starting point is the same.

“I always start with research,” Mr. Rockwell says. “In the case of a restaurant—like The Library I did for Andrew Carmellini at The Public Theater—the research began with understanding his food, understanding the history of The Public, looking at models used for The Public over the years. I start surrounding myself with as much research as I can.”

On his theater projects, one thing that Mr. Rockwell counts as “research” is having “lots of dialogue with the director,” and he waded through torrents of it with Jerry Mitchell on Kinky Boots and George C. Wolfe on Lucky Guy before he sketched out a single drawing.

Daryl Roth, the lead producer of Kinky Boots and a co-producer of Lucky Guy, applauds his collaborative nature. “Directors and designers love working with him because of that,” she says, “and I love working with him because he just gets it. He understands storytelling. He presented the newsroom in Lucky Guy so you could feel its excitement and energy. He designed the factory in Kinky Boots where it is always in our background and other things happen in front of it, which situated us cleverly.” Mr. Rockwell finds a play’s DNA by reading its script. He visualized the Northampton factory in Kinky Boots as a third-generation shoe shop where all the workers still pride themselves in their craft. “I wanted a slightly decayed romance about the place,” he says.

Lucky Guy covers the last 13 years in the life of Mike McAlary, a hot-shot star reporter for all three local tabloids. Nora Ephron got his story down to 44 scenes that flit from newsrooms to barrooms to hospitals to Elaine’s. Unfazed, Mr. Rockwell sprinted through this saga like a pinball, minimizing the settings as he went.

“George Wolfe and I both came to New York in ’73, so I think we both had an interesting relationship to the city in the mid-80s because it was new to us,” he says. “He wanted photographs of what the newsroom looked like in that period—the News, the Post, Newsday—but what I sensed we needed was the idea of the city being this messy, always-moving, chaotic place. The showdrop consists of 50 New York images put together to create a skyline that hovers over the most realistic set of all, that Irish bar. It was like a refuge for all those reporters, their church.”

It’s worth noting that having also designed the sets for Off-Broadway’s CQ/CX, which recounted the Jayson Blair scandal at the New York Times, Mr. Rockwell now has the distinction of being the only scenic designer to put all four local dailies on the stage.

Occasionally, Mr. Rockwell has an opportunity to think outside the sandbox and draft his showbiz associates for unexpected projects. For example, he brought director-choreographer Jerry Mitchell in to consult about the central marketplace in the JetBlue terminal at JFK. His thinking? “One way to make 20 million people moving through a terminal an asset and not a problem was to study movement and pattern. One of the reasons people want to come to New York is that density, so we created these bleachers where you get to sit above and watch the dance of movement.” Director Wolfe tapped Mr. Rockwell for a project in Atlanta—the National Center for Civil and Human Rights. The structure will house the celebrated painting of Ruby Bridges, a six-year-old African-American girl getting a military escort to her newly integrated school. The painter is Norman Rockwell, whom Mr. Rockwell fondly—but falsely—claims as his uncle.

Mr. Rockwell is not just imaginative, he’s intent on fostering imaginations of children through the playgrounds he designs—one, called Imagination Playground, is at South Street Seaport, and there’s a new one at Brownsville—and these came to be in a roundabout, Rockwell kind of way. After raising funds to built the viewing platform at Ground Zero, he tried in vain to get a second downtown project off the ground, a new cultural building for visual and performing arts called The Incubator. “When I finally realized that was never going to happen because of the amount of red tape and logistics, I said to someone, ‘We should have just put our effort into creating a new playground.’ He said, ‘What would that look like?’ So I started studying playgrounds and realized they had become very linear.” His solution started, as always, with research. “I looked at the adventure playgrounds, post-World War II in London, where by necessity kids collected things and made things, so that’s the genesis of this playground.”

Jack O’Brien, who employed Mr. Rockwell before (for Hairspray, Dirty Rotten Scoundrels, Catch Me If You Can and Dead Accounts) and will again (for Hugh Jackman’s Houdini), is as awed as all of us at his boundless creativity: “I love the fact that he’s a sort of universal—by that, I mean he comes from so many disciplines,” the director explains. “He’s an architect. He’s a creative mind on an urban renewal level. He thinks about children. He brings a whole universe to people like us who tend to be tunnel-visioned about what we’ve neither seen nor done. He comes with a mind-expanding trampoline of ideas. All that, and he is such a gentleman and so modest. You don’t quite get it that he’s as extraordinary as he is—but he really is.” 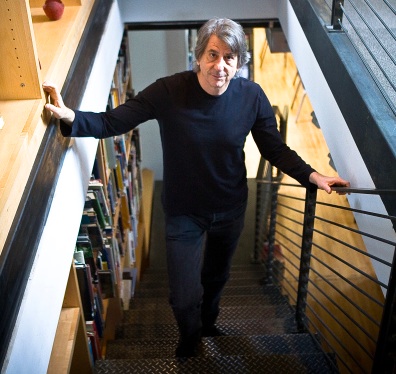