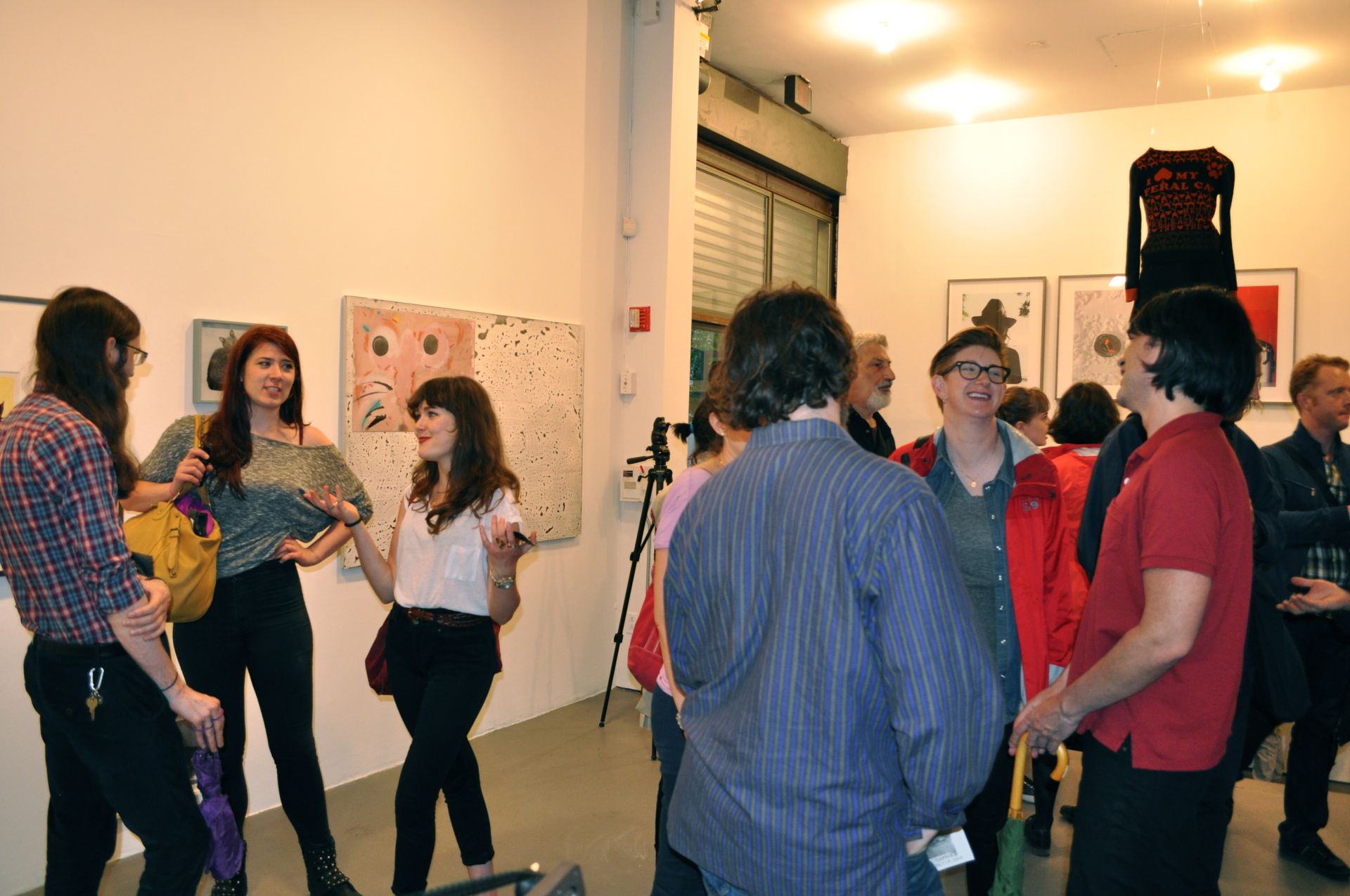 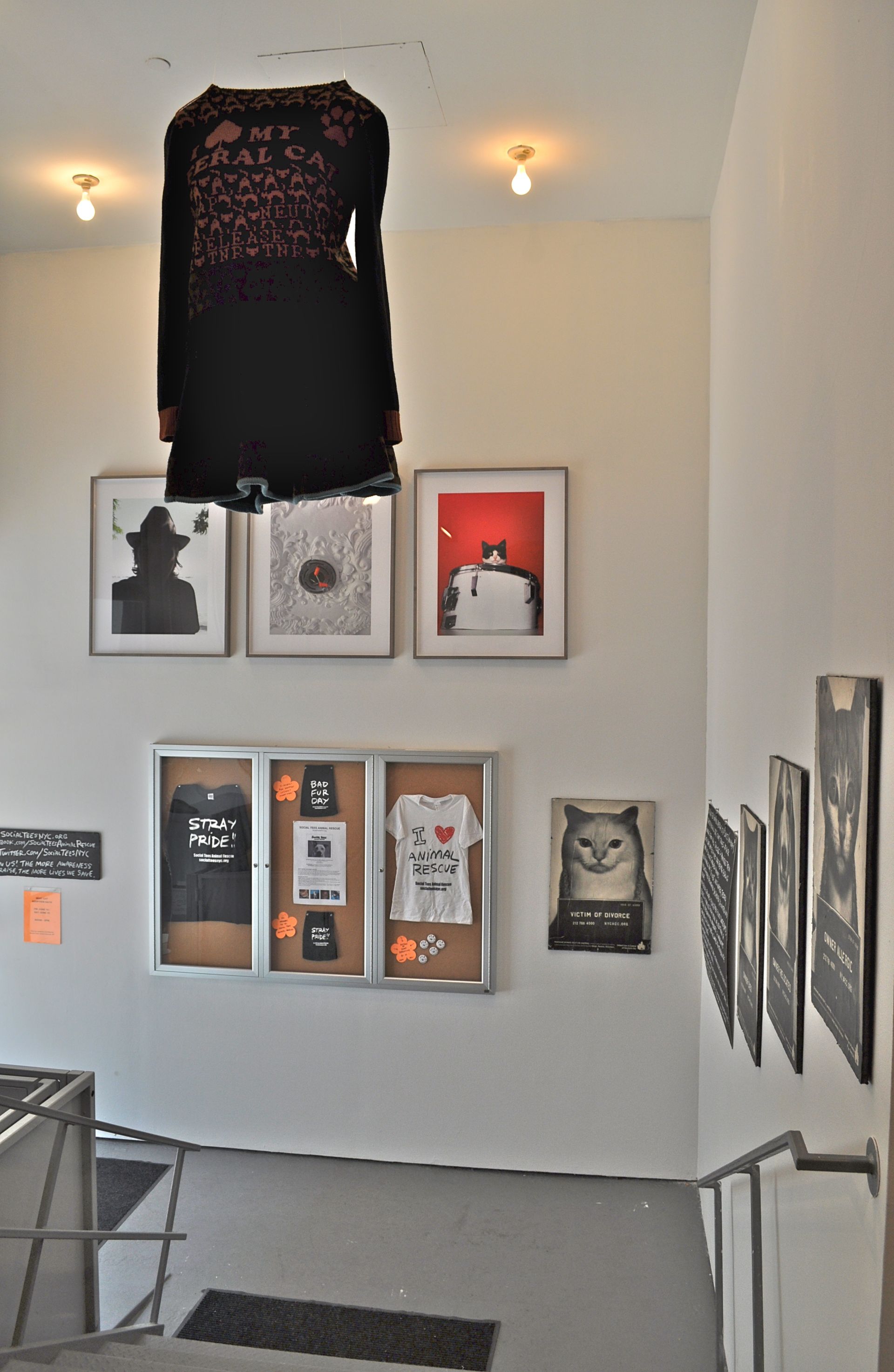 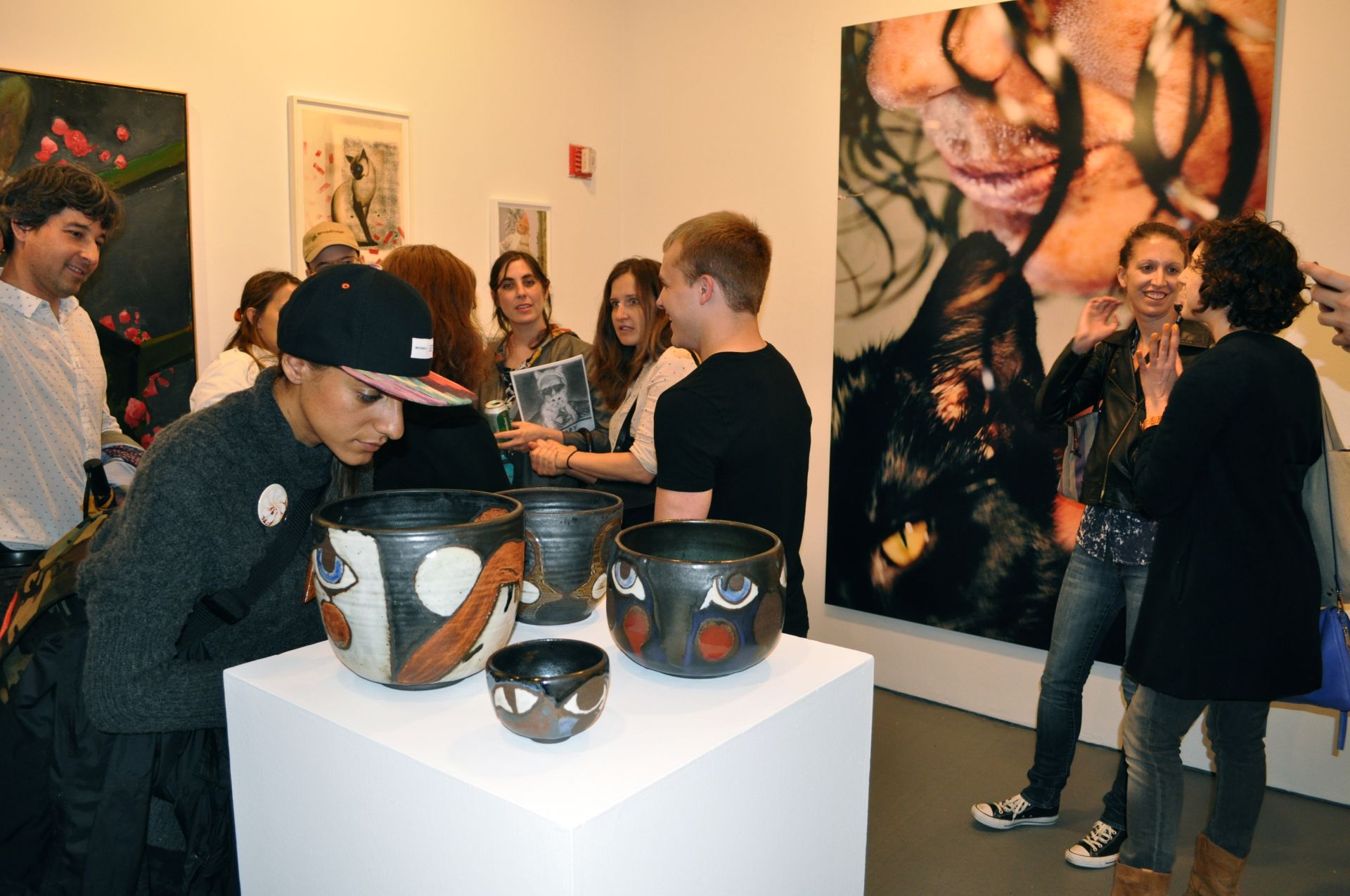 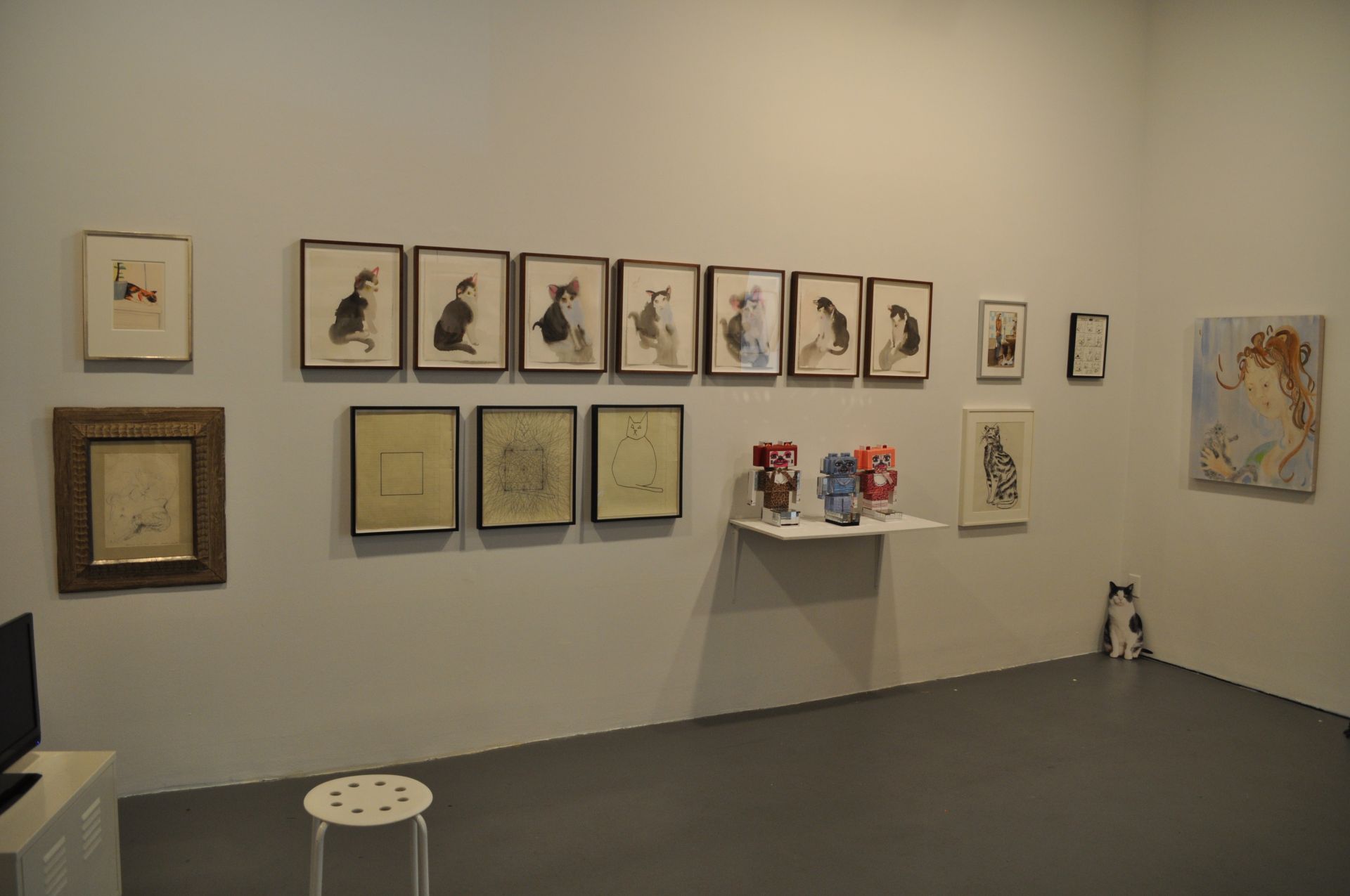 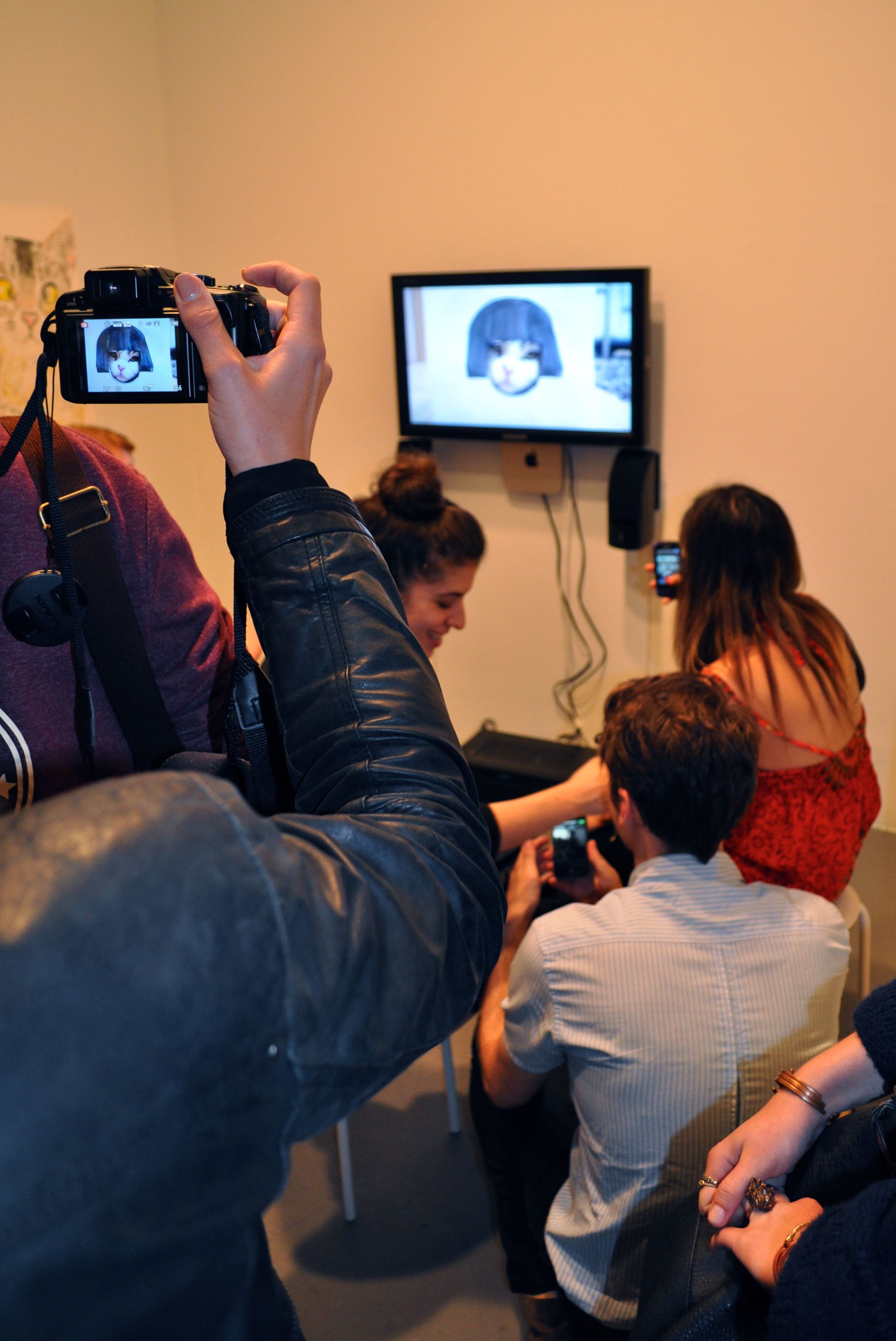 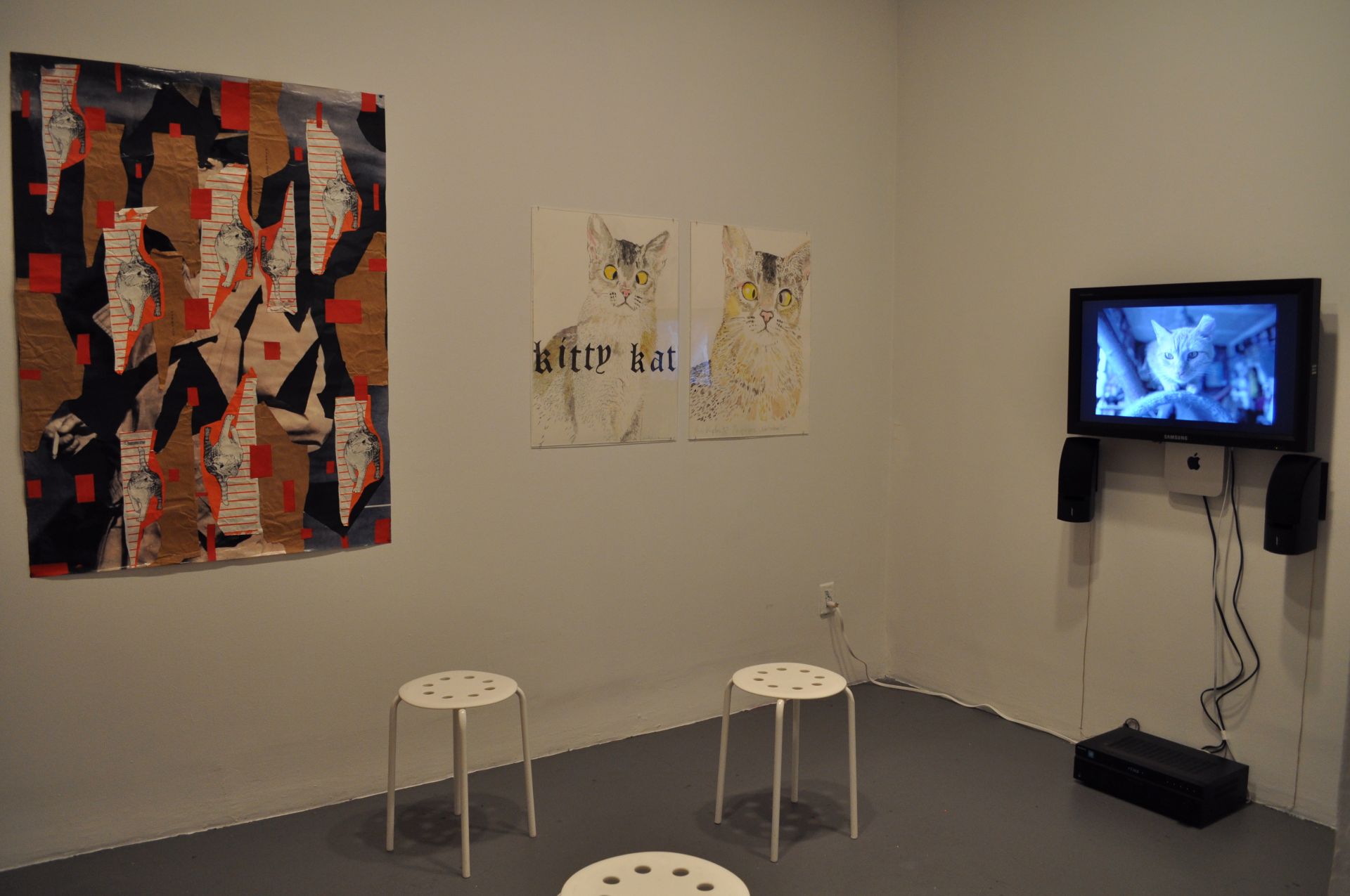 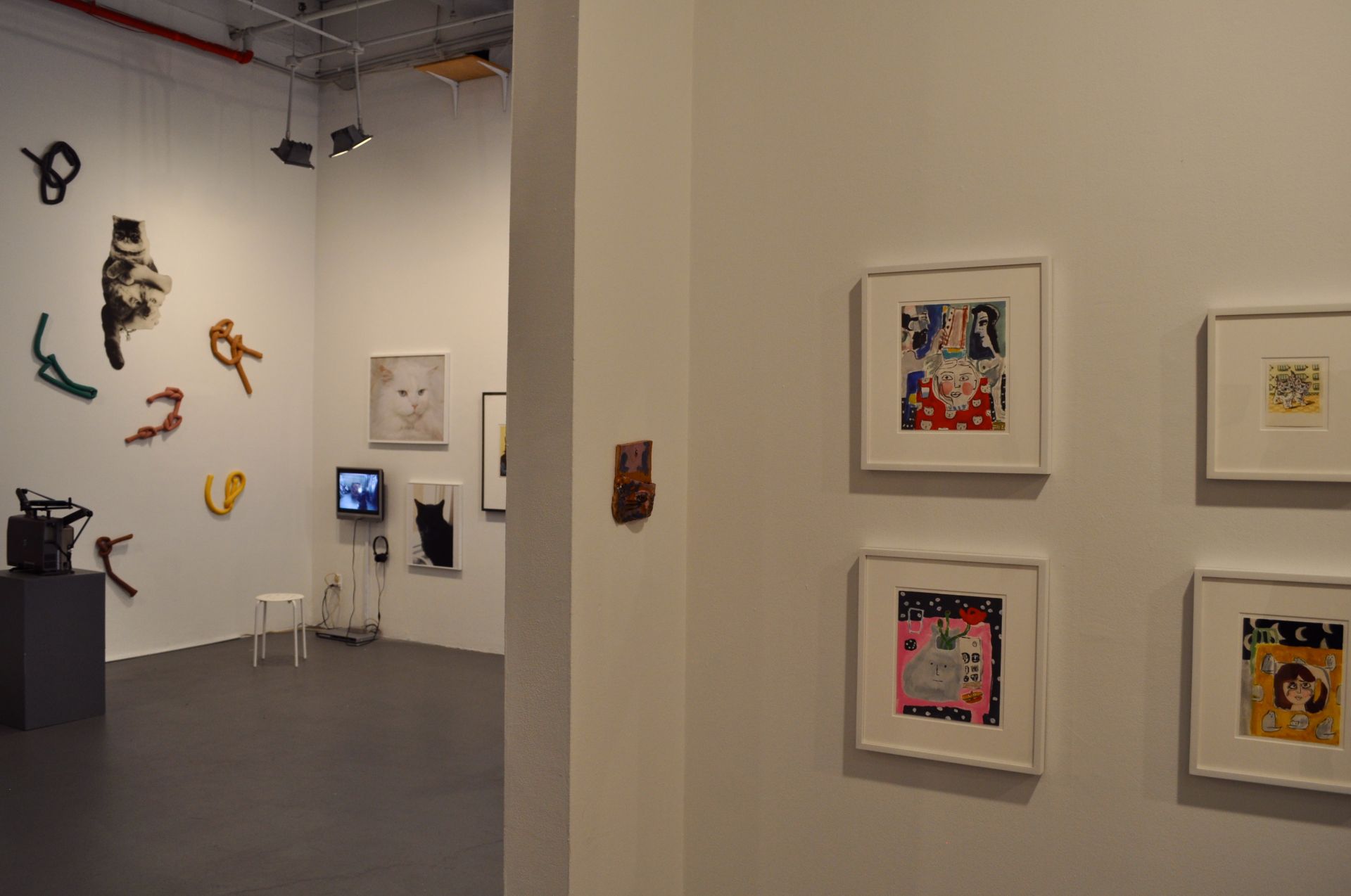 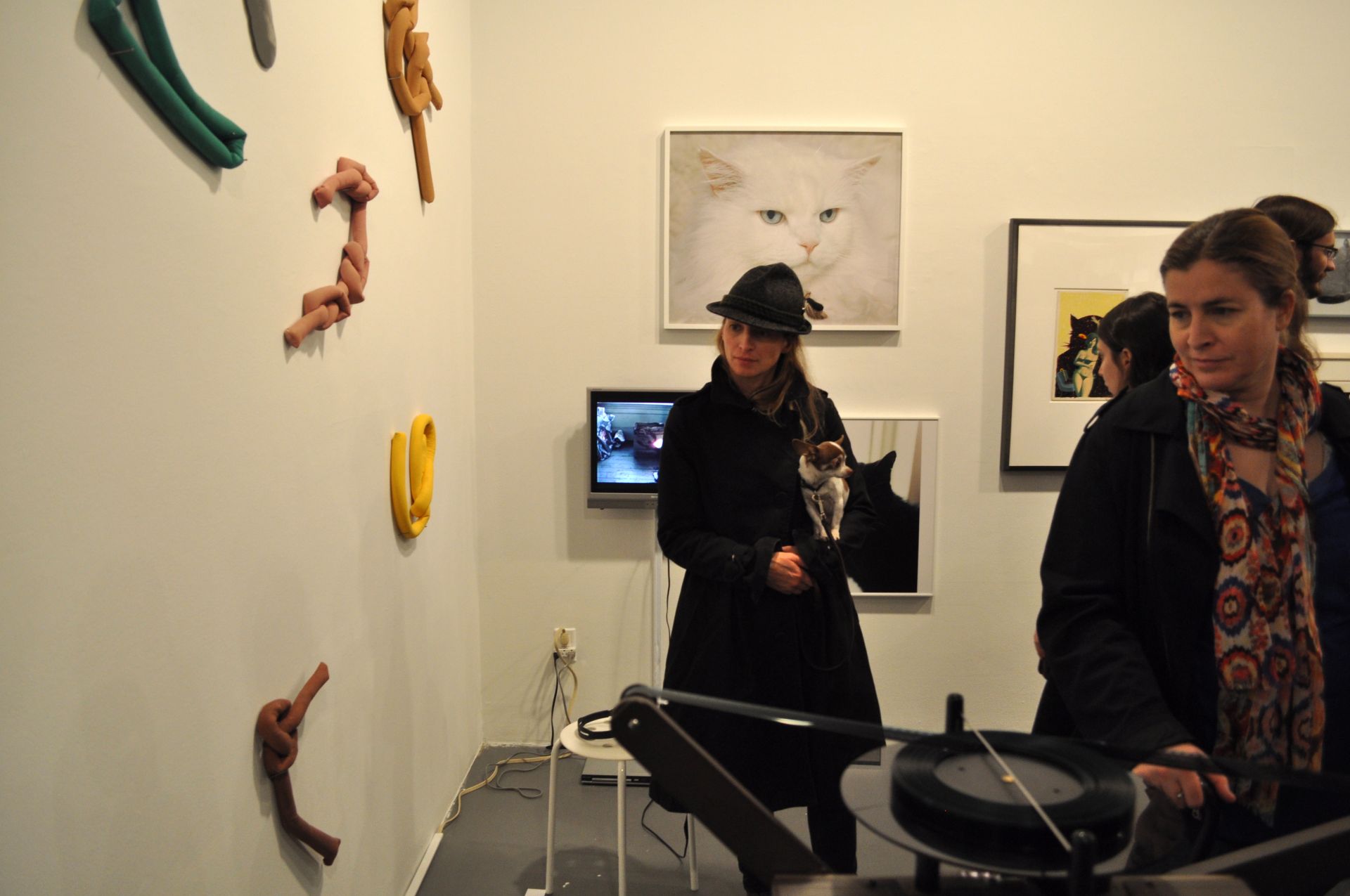 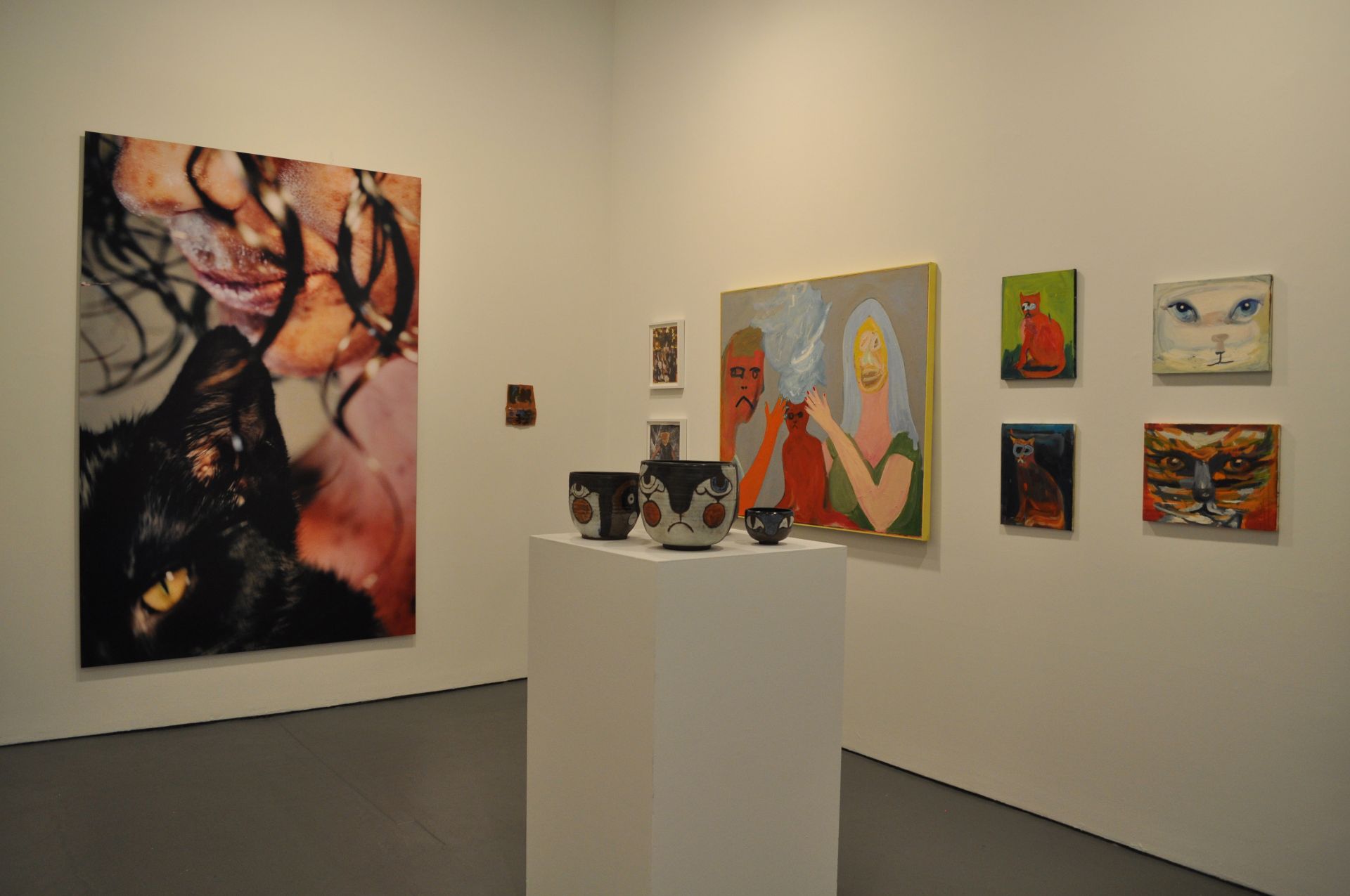 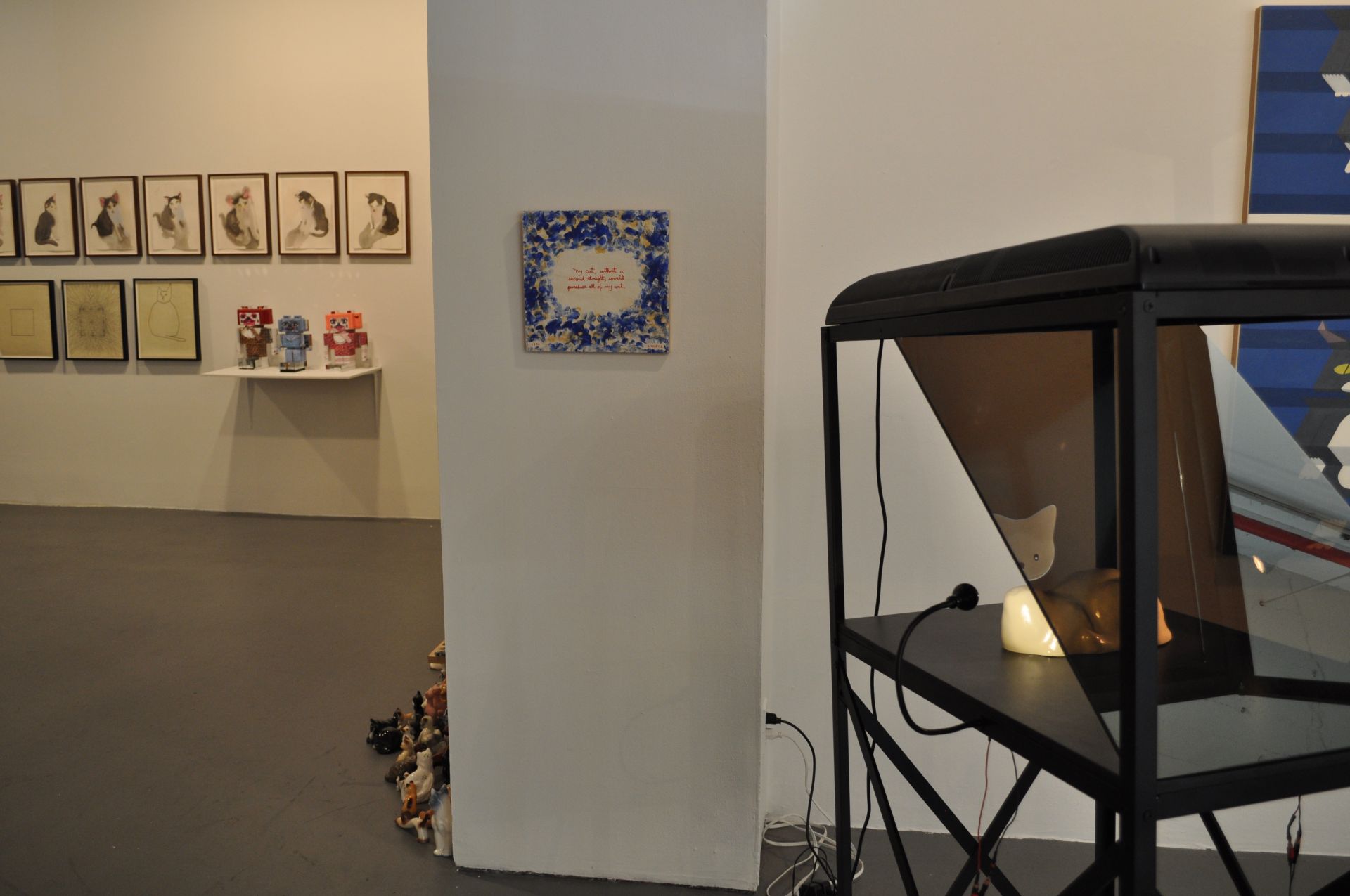 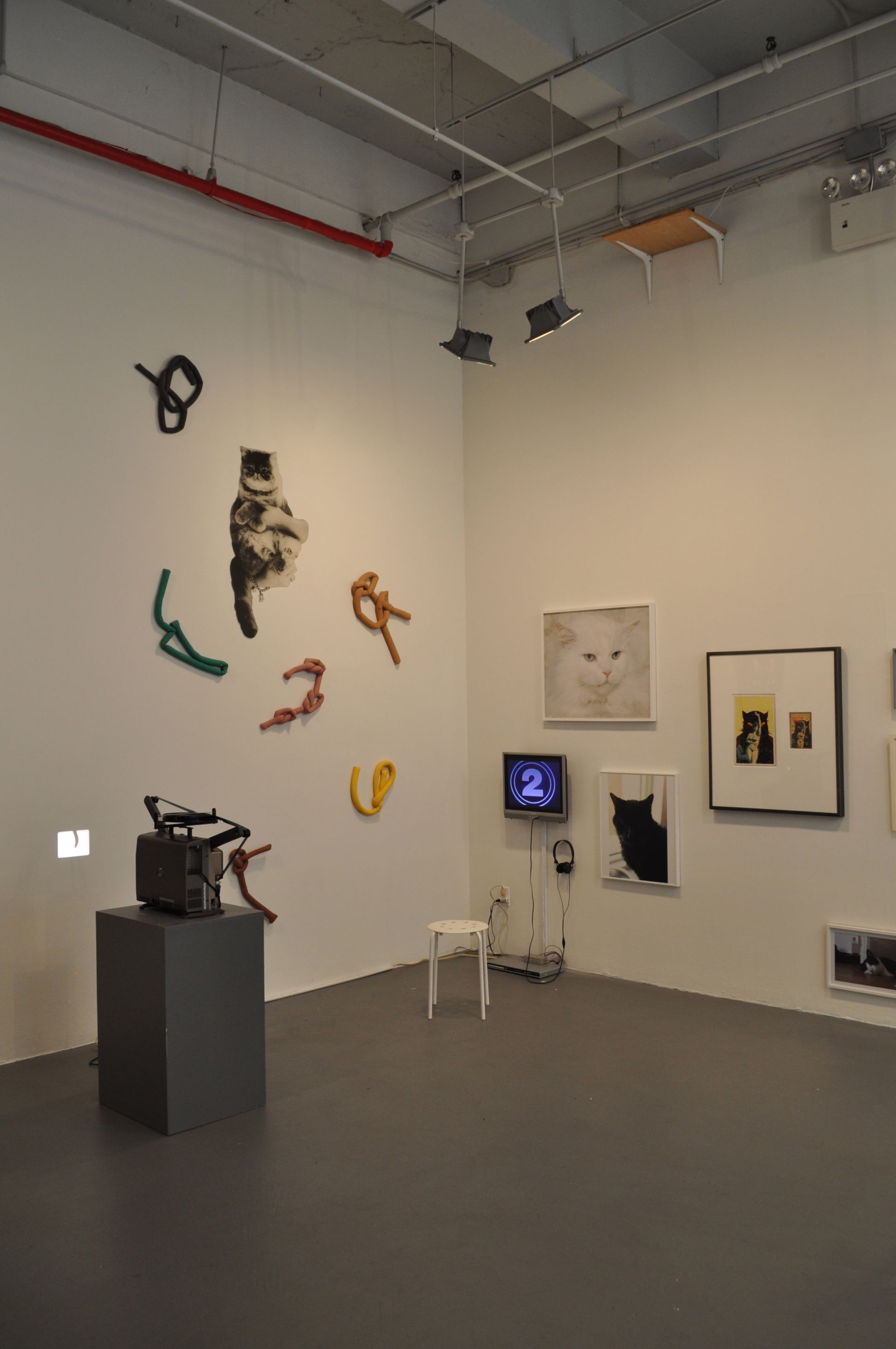 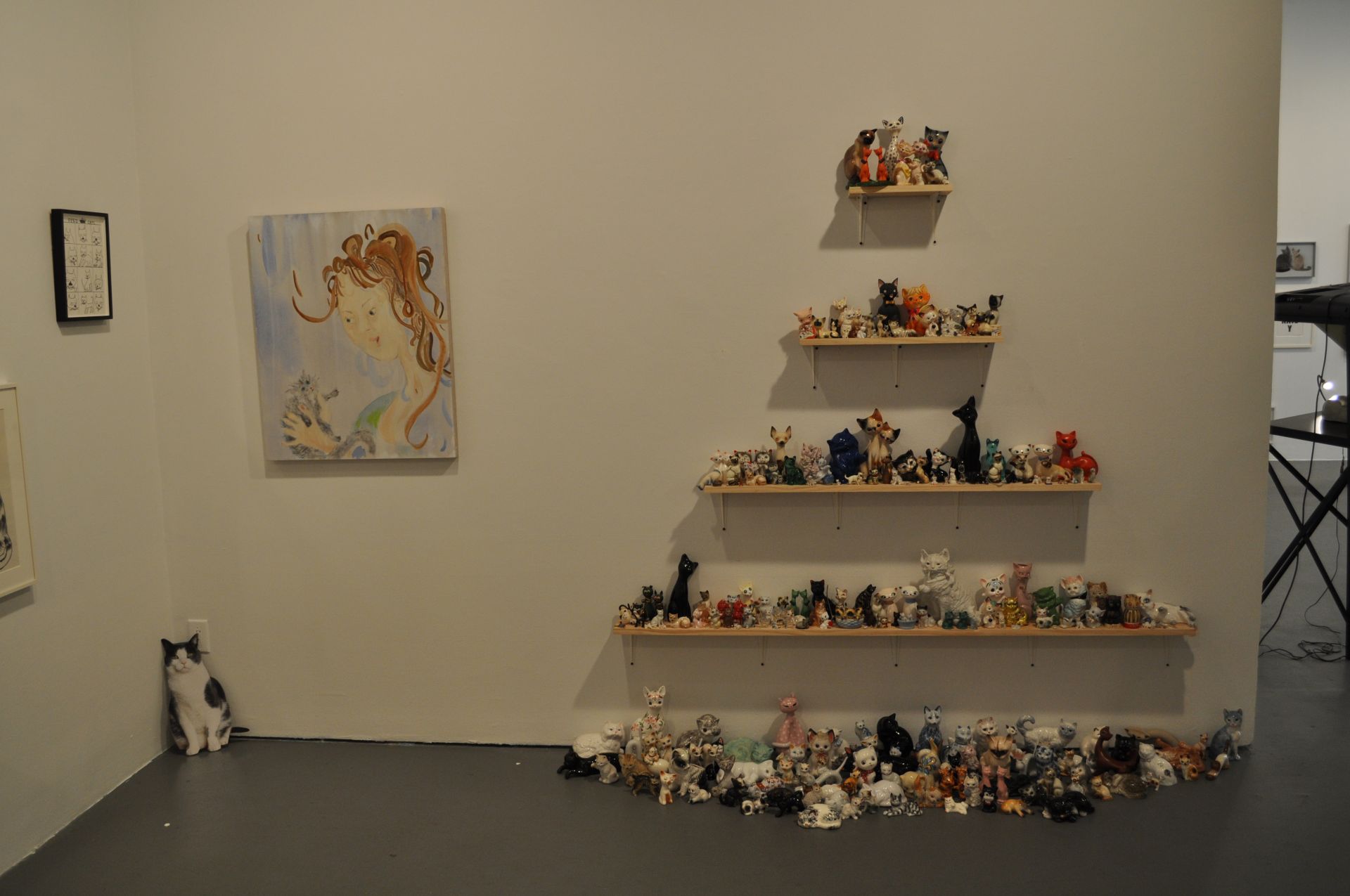 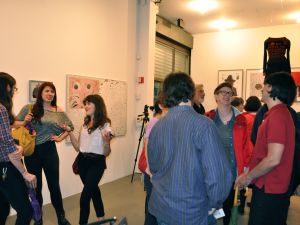 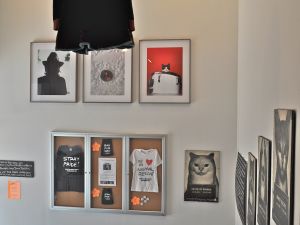 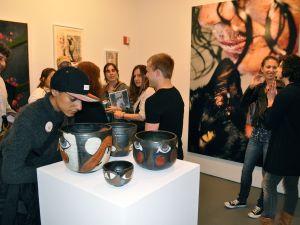 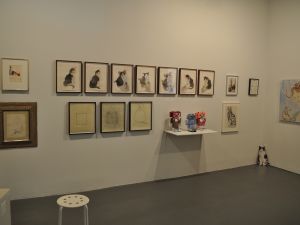 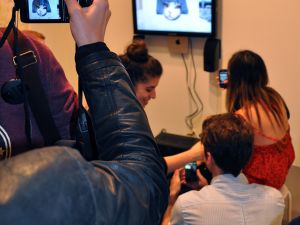 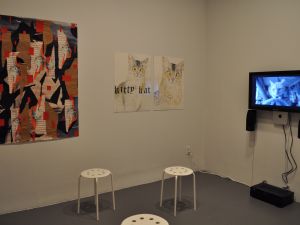 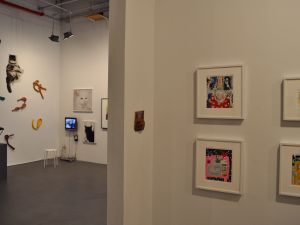 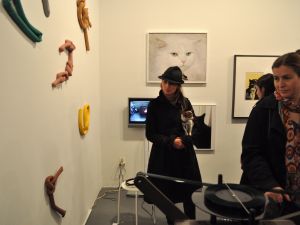 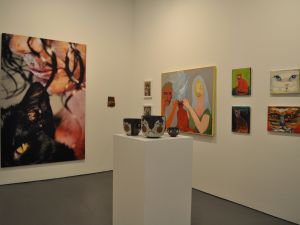 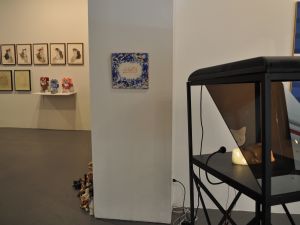 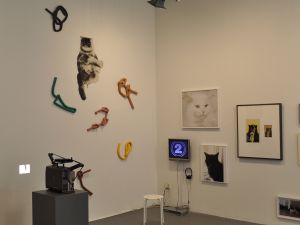 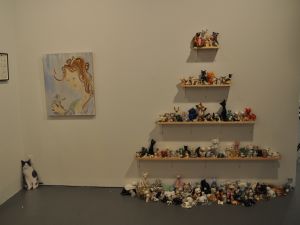 The walls of White Columns are studded with work by dozens of artists for its latest exhibition, “The Cat Show,” which is organized by Rhonda Lieberman, but at the opening last Thursday evening, stars like Andy Warhol and Matthew Barney played second fiddle to five homeless felines.

Visitors pressed their noses and smart phones against the chicken wire dividing them from the cats, who spent the opening exploring the amenities of their artsy enclosure, such as Rob Pruitt’s Zen Litter Tray (2013) and Jonathan Horowitz’s carpeted Cat Pedestal (2006). The crowd cooed every time one of the kittens did something cute, which was pretty often. By the end of the night, a dozen people had filled out adoption applications and by the end of the weekend, all five cats had found homes (as had two more that arrived on Saturday). While the gallery originally planned on only holding two adoption weekends, it will now host Social Tees Animal Rescue cats every weekend (except for that of July 4) during the show.

The opening was packed (torrential rain prevented smokers from spilling out onto the sidewalk, exacerbating the crush) and visitors shuffled shoulder to shoulder around the show, trying not to brush each other with wet umbrellas. Was it the cats? Or the fact that there have been few openings lately, with everyone in Venice and Basel?

It was difficult to see much of the work. One caught glimpses of cat-centric ceramics, paintings, prints, photos, videos and drawings between people’s heads. One particularly fine wall featured a Patti Smith pencil drawing of Robert Mapplethorpe and his puss, just below a bright Elizabeth Peyton drawing of a sleeping calico.

Viewers pressed into the smallest gallery to watch YouTube videos, squealing as Maru—Japan’s famously weird Scottish Fold—did body slides into cardboard tunnels. There was no wall text, just a 17-page checklist that some brave souls used to identify the vast array work. Doing so paid off: a small video projected in one corner proved to be a 1989 Gus Van Sant short, in which a kitten scrambles after a moving patch of light reflected off his guitar. Other artists included Marilyn Minter, Rita Ackermann, Cory Arcangel, Richard Prince, Olaf Breuning, Laura Owens and Gary Indiana.

While most of the work in the show was not for sale, a couple Joe Scanlan cat toys were available for $4,500 each, with the proceeds going to Social Tees Animal Rescue.

One viewer commented on the show’s theme before extracting himself from the throng. “You know how one cat on its own is really cute, but a lot of them feels kind of weird and crazy?” he asked. “This is kind of like that.”

For the most part, though, viewers couldn’t seem to get enough of the animals. One could almost feel Instagram, Twitter and Vine swelling with more cat content.

“I felt like the cats were celebrities,” said Samantha Brody, development manager at Social Tees, at the gallery the next day. “People were taking photos and video of them. It was almost like they’d never seen a cat before.”

For photos from opening night and installation shots, view the slide show above. Photos by Zoë Lescaze for The New York Observer.