I lead a relatively unhealthy lifestyle. I say “relatively” because I guess compared to a heroin addict or someone who has just woken up from a coma, I’m in pretty good shape, muscle tone-wise. The only reason I’m not very overweight from my mainly sedentary lifestyle is that I often skip breakfast and sometimes lunch—who has time when you’ve got deadlines, cigarette breaks and 5 p.m. cocktails? And so somehow I’ve managed to convince myself that my New York diet has kept me slim, if not exactly healthy.

But no one would ever confuse me for athletic. I am so uncoordinated that I’ve been known to dislocate a kneecap getting up from the toilet (true and painful story). I have never been able to do a pull-up, and standing up for too long gets me winded. I have gotten cramps, not from running, but from lying prone on my couch for long periods. I’ve sustained injuries from stretching for my computer. Running seems like a waste of breath. I have no idea what all those terrifying torture machines at the gym are, nor do I care to know.

Luckily, if there’s one thing I’ve learned from listening to cocktail banter, it’s that every celebrity, no matter how big or small (or only in their mind), was just like me until they met their messiah in the form of a personal trainer. For actual celebrities, personal trainers are just as important as your hairdresser/best friend. For the non-tabloid bold-faced names, personal trainers are a status symbol, and since you can’t always tell the difference between a lady who does pilates and a lady who does pilates one-on-one with Mari Winsor (whom she has on speed-dial), it’s dicey for a modern socialite to tout the pedigree of her Michelle Obama arms. I mean, how do we know you just didn’t work those machines on your own?

So I  would obviously find myself under the helpful tutlage of Will Torres, a personal instructor to the stars who sells membership “packs” that can end up costing as much as $4,608. (A typical one-on-one session with Will costs $300.)  During an editorial shoot for the fashion magazine Bullett, a woman whispered the name “Will Torres” as if passing along a piece of the Da Vinci Code.

“He does all the stars,” she said. I looked at Mr. Torres’ website for his training studio, willspace. Once you’ve whipped half of the designer world into shape and moved on to Andy Cohen and the Real Housewives, you become famous yourself. I was impressed by what I read about Mr. Torres on the site, and the pictures of the shirtless 34-year-old didn’t hurt, either.

But I was dubious, even after Mr. Torres agreed to start me on a two-month private training program if, he emphasized, I did my part to show him I was serious: Dedicating my free time to training. After all, what could he give me that another trainer—for about one-third of the price—couldn’t?

Perhaps it was that personal touch. Like Mr. Torres asking me what I had for breakfast the first Tuesday we met.

My answer: “Half a Milky Way.” Hey, it wasn’t my job to make this easy for him.

There is something to be said for a guy who doesn’t just have a personal system but his own gym studio to back it up. Over the next hour, Mr. Torres took me through a series of lunges, squats (my personal nightmare), Russian deadlifts (not as fun as they sound!), abdominal bench lifts, step-ups, chair dips, shoulder presses, and a round on some sort of pulley-cable death machine that enabled me to do pull-ups, using my body as dead weight.

“Okay, what’s next?” I asked after a particularly rough lunging session.

Mr. Torres responded, but suddenly I couldn’t hear him. In fact, I couldn’t really hear anything. It was like the pressure dropping all of a sudden in an airplane, or being dunked underwater.

Still, I finished all my exercises and sat down to get my assessment.

Mr. Torres looked at my chart: height, weight, BMI. And then he looked at me, panting, covered in sweat, and sort of tilting to one side.

“What do you think of your weight?” he said. Always a trick question.

“Do you want to lose weight?”

I didn’t, particularly. I mean, it’s always nice, but losing weight isn’t hard to do (and isn’t hard to undo) when you frequently forget to eat until it’s time to start drinking. I told Mr. Torres I wanted to get toned, not shed pounds.

I thought he’d be impressed by my lack of body-image hang-ups. Instead, he sort of frowned.

“You’re not overweight,” Mr. Torres said with the clinical air of a doctor delivering the news. “But you’re skinny-fat.”

“Oh,” I said. “Thank … you?” I’m not immune to that modern female condition that makes us feel the need to extend our appreciation to anyone who calls us “skinny,” even if that word is preceded by the phrase “You’re way too.”

Or, as in my case, followed by the word that means the opposite of skinny.

“You don’t have a weight issue, but we need to get your body fat down and increase your muscle tissue.”

Mr. Torres proposed to do this in two ways. One, by working out, (which, honestly, was the only way I was hoping to do it.) And two, by keeping a food journal and chronicling everything I ate in order to cut calories.

Those were the (celebrity) trainer’s orders. That, and four liters of a day. And go to bed earlier. And eat dinner earlier before bed (and not, as I was wont to do, at one in the morning.)

Apparently I had signed up not just for a personal trainer, but for a nutritionist and lifestyle consultant as well. Maybe that was the explanation for Mr. Torres high price tag: he’s a hands-on personal trainer who spends his time emailing, texting and tweeting his clients like some sort of maniacal Richard Simmons on social media. Except Mr. Torres was less of a cheerleader and more of a whip-cracker.

The first night, I emailed Will my food journal of the day, which seriously contained only half a Milky Way, a chicken Caesar wrap, some salmon, broccoli and bourbon.

“I might have some cottage cheese with honey later, but I don’t know yet!” I added at the end of my email, feeling like the kick-ass health nut I was totally going to be.

Two minutes later, Mr. Torres emailed back. “Resist the snack tonight,
he wrote, “Or at least no honey with the cottage cheese. It’s late …”

It was going to be a long two months. 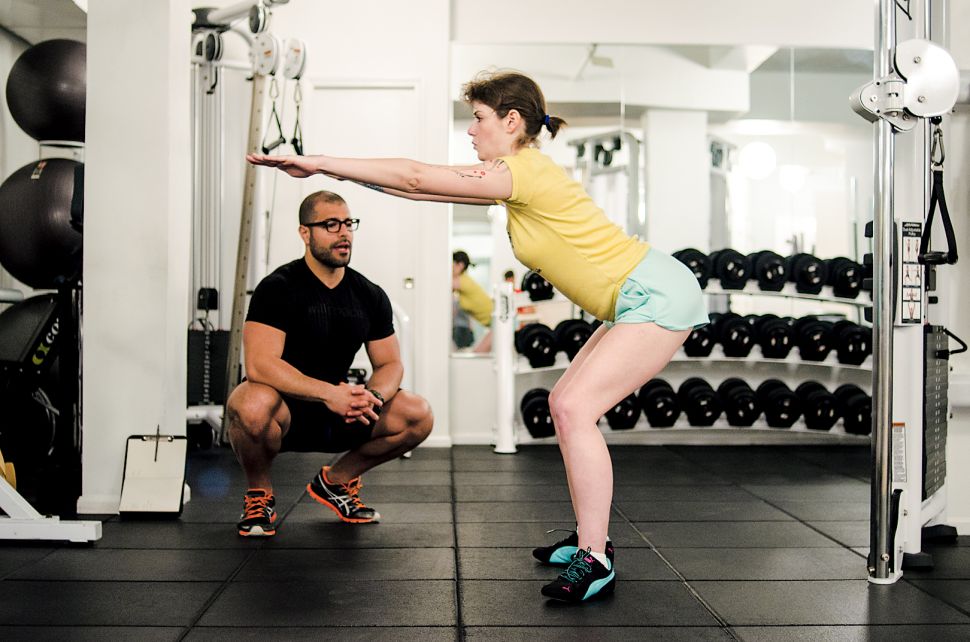