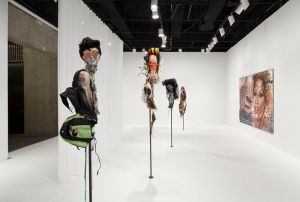 This exhibition, in the Whitney’s lobby gallery, is a thriller—two young artists have stepped up to a larger platform and are clearing new, still-shadowy pathways for art. Coming not long after the Whitney’s 2012 biennial and a Trisha Baga show in this same space, it gives the impression of a museum in touch with art’s zeitgeist.

The Whitney is, in part, the subject of Brussels-based Jana Euler’s piece, a two-panel oil on canvas, roughly 6 by 10 feet. The museum’s Marcel Breuer-designed building is on the left; on the right is a portrait of Whitney Houston in her prime, her face as large as the building. Ms. Euler paints this insouciant pun with the cartoonish élan of Martin Kippenberger or Francis Picabia, layering multiple images atop one another like so many transparencies. Musical notes glide across her Whitneys and abstract sculptures float within them, as do two nude bodies in contorted poses. Pop pleasures, New Age leisure and modern art commingle and are winkingly equated.

More bodies await courtesy of New Yorker Stewart Uoo, who has cast eight of them—their upper halves, anyhow—out of polyurethane resin. These are the four stars of Sex and the City, though you may not recognize them at first. He has used the same Patricia Field mannequin for each one and marked them with grimy pastels. The women, affixed to metal poles like war trophies, are burned, battered, ruptured, spilling their innards (computer cables and headphones). They are covered with flies, maggot cocoons and dust. Only their tangles of hair and accessories hint at their identities—a charred Gucci scarf, a menagerie of hippie textiles, a haute black veil, a sporty, no-nonsense backpack.

These sculptures are horrifying, hilarious and unflinching. Inspired by the reverie of violent video games and anime and equipped with razor-wire spinal columns, they seem to embody the tortured identities cybernetics just might have in store for us.

The gallery has been given a second floor of plywood covered with bright white denim (the same color as the walls). It feels precarious in there; sculptures rock as you walk. As curator Jay Sanders notes in an  essay that accompanies the show, the space feels perfectly queued up for digital reproduction, which is how so much contemporary art circulates today. The joke, of course, is that, first of all, online you can get none of the gorgeous, sickeningly obsessive details of Mr. Uoo’s sculptures or Ms. Euler’s painting and, secondly, for the past month and a half, people have been treading through the space, sullying that denim so that it is now a pale gray in the most heavily trafficked areas. And it is only getting dirtier.