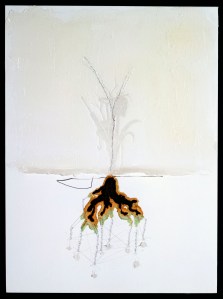 A drawings show for a big-budget artist is kind of like an acoustic concert for a stadium pop star: you will quickly discover if he is any good solo, or if his act depends on the stagecraft and pyrotechnics of others. The Matthew Barney drawings show at the Morgan Library, co-curated by Isabelle Dervaux of the Morgan and the inimitable Klaus Kertess, suggests that Mr. Barney is the Madonna of contemporary art.

After stepping off the Yale campus and the pages of the J.Crew catalog (for which he modeled), Mr. Barney garnered fame in New York’s art world in the mid-1990s as the chiseled creator of highly produced, strangely humorless art videos celebrating an obscure muscle of the male reproductive system—the “Cremaster” series. Mr. Barney has also made a lesser-known body of performances preserved as video installations that he calls “Drawing Restraints.” These pieces—loosely inspired by Bruce Nauman and Vito Acconci performances—feature the artist in a harness or other physically confining apparatus laboring in an empty gallery space to create a work of art.

Since opening its Renzo Piano-designed building in 2006, the venerable Morgan, known for medieval manuscripts and historical works, has endeavored to exhibit more postwar works on paper. In the main gallery, then, framed in pink, white, red and black “high density polyethylene” and “self-lubricating plastic” frames, are Mr. Barney’s drawings. These are executed in a pale, uncertain, scratchy style. Their subjects are hard to make out but always figurative, exemplary of the pick-a-page-at-random-from-Gray’s-Anatomy school of drawing.

Although I wanted to like it, like the term “self-lubricating plastic,” Mr. Barney’s drawing show looked to me like self-aggrandizing marketing cant, scripted to obfuscate and bolster what is essentially expensively made, tone-deaf work.

The display compares unfavorably to the elegant, if equally self-serving, exhibition Richard Prince curated at the Bibliothèque Nationale in Paris a few years ago, which combined Mr. Prince’s collection of vintage potboiler novels and Beat-generation artifacts with obscure archival materials from the Bibliothèque’s collection.

Although Mr. Barney borrows the language of counterculture, of the sexually marginalized and of feminist investigation of the body, a well-connected straight white man making art about his body and sexuality has never been that subversive, not in the 1990s and not today. It’s fairly continuous, in fact, with the last 2,000 years of Western art. There’s nothing wrong with it, but it’s not enough to sustain an exhibition, never mind a career. His appropriation of the symbolism of spiritualism, mysticism and the occult feels about as sincere as Avril Lavigne’s punk act.

In retrospect, a survey of “Drawing Restraints” might have fit the bill. A single new piece, Drawing Restraint No. 20 (2013), is on view here: some graphite, chalk and Vaseline-like gunk smeared on the wall and dumbbells placed on the floor. The way arcing arms trace curved marks on the wall is reminiscent of the Jasper Johns “Catenary Arch” series, leaving the impression of Mr. Barney as a kind of jock Johns.

Across the hall from the Barney show is “Illuminating Faith,” an exhibition of medieval illuminated manuscripts depicting the Eucharist. Here are art objects that reward sustained attention. Elucidations of the transformation of matter to spirit, the books have more engrossing symbolism, mysticism and material accomplishment on one page than Mr. Barney could hope to mimic over the course of a career. (Through Sept. 2, 2013)