On an unseasonably cold Saturday afternoon, rogue taxidermy diva Divya was setting up scalpels, Borax and a table of colorful items at the prop warehouse-cum-event space Acme Studio in Brooklyn. If it weren’t for the animal heads on the wall, we may have been more disturbed when Divya brought out the day’s “project”: dead mice, ready to be turned into art.

But the strangest plot twist of the day was yet to come: At 6:30 p.m., when most people were still putting the finishing touches on their dead mouse tableaux—a gynecologist named Jerry had created a gruesome/cute doctor mouse who was performing his own internal surgery—the class was ushered out. Acme began to transform into something resembling an old-timey mental institution, complete with working hospital gurneys and what looked to be a genuine gynecologic table. (No word from Jerry on this.)

This wasn’t necessarily out of step for Acme. The “one-stop shop,” as Shawn Patrick Anderson, Acme’s founder and veteran prop/set designer, put it, has built or commissioned the odd set piece for Wired and Esquire covers, among many other publications, and hosts countless editorial photo and music video shoots for the likes of Missy Elliott and Bullett magazine.

But peeking behind a partitioned area, the Transom noticed some mattresses strewn on the floor, along with a sign above the curtain: “Keep Play Area Clean.” Hmm.

“Are you setting up for a sex party?” we asked Brian Colgan, Acme’s 27-year-old manager.

“Actually, we just rent the space out to one of Shawn Patrick’s friends,” he said, not missing a beat.

That friend, we soon learned, was a man known as “Kenny Blunt,” who knows Mr. Anderson through vague Burning Man connections and helps throw roaming sex parties as part of an organization called Chemistry.

It was several months before the Transom returned to Acme, now on the guest list for one of Chemistry’s events. Standing in a homemade lofted office and looking down through the haphazard-seeming piles of ephemera—old cameras, typewriters, African masks, expensive-looking vases—we could just make out the ground floor. We trundled then with some trepidation down to the nighttime soiree, which we soon learned was “Motorcycle and Leather”-themed.

Perhaps unsurprisingly for a prop house, the Chemistry event went well beyond a simple key party. You could sign up for a motorcycle ride around Williamsburg, clinging to your own leather daddy. There were medieval torture racks, where what we hoped were convincingly good actresses moaned in pain while being whipped by muscled men.

At one point, a tres risque burlesque show took center stage—for her next trick, our performer will make a length of colored rope appear out of an unexpected orifice!—while in the kitchen, a handsome 20-something named Mark cooked quesadillas and put out an assortment of munchies. He was shirtless and wearing a dog collar, and it was hard not to think of the sanitary implications of finger food.

Despite our initial prejudices, the warehouse’s whimsical functionality actually elevated the night beyond straight perv. (Should we have been surprised at how many of the attendees were young, attractive and wearing American Apparel briefs?) The night took on a tone of the theatrical rather than the pornographic. Thanks to Acme’s built-in hideouts, one could spend a good portion of the evening walking around, engaging in fairly regular party banter and never actually encounter any hard-core sex (unless one wanted to).

“I was actually writing about it for a story,” a freelance writer named “Fab” told the Transom on how she entered the Chemistry scene. “But my boyfriend didn’t want to go. So I went to find a partner for me to come with.” She looked into her leather daddy’s eyes. “We’ve been coming to these things ever since.”

Mr. Anderson was running to and fro, checking on wiring and making sure that everything was running smoothly, treating the sex party no differently than he would a Bullett shoot. Outside, Mr. Colgan stood bashfully, drinking from a plastic cup. “Um, are you having a good time?” he asked.

In his former life, Mr. Colgan worked for the Nielsen Group. After layoffs, he decided to become a carpenter, apprenticing under Mr. Anderson. Now managing Acme’s day-to-day activities is a full-time job.

“It’s a strange industry,” he said, referring to the world of prop and set designing. “Even running the studio is strange.”

We bet. Back inside, a young gentleman with tousled brown hair approached with a cat-o’-nine-tails.
“Do you want to get swatted on the ass?” he asked. 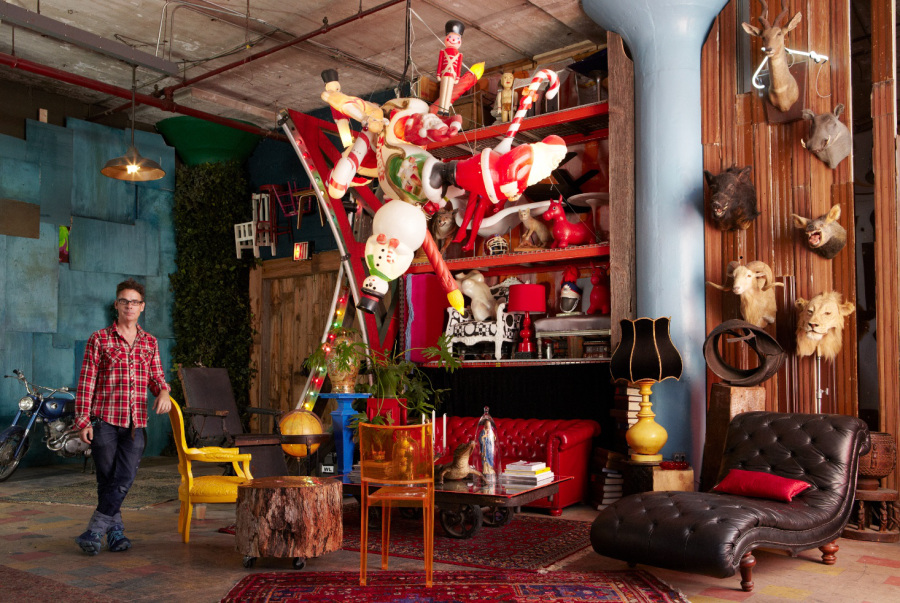