Among the many gifts Benjamin Graham bequeathed to investors was the allegory of Mr. Market. He’s the collective us, the guy who wakes up with a new view about the best price for a stock (or the market itself), often without any clue as to why his outlook has changed.

Mr. Market seems particularly manic these days. Apple is the future! Apple is the past! Fiscal austerity is the only way, so buy stocks when there’s a budget deal! Wait, there’s an error in that Harvard guy’s spreadsheet? Buy whenever Paul Krugman opens his mouth! Meaning all the time! (I love your pugnacity, Paul Krugman, but you’re becoming like those poor people who think tweeting 100 times a day is impressive.)

But some things do focus the mind, even one as scattered as Mr. Market’s. One of those things: the appearance of Meredith Whitney. In October 2007, she told him something about Citigroup and lax risk controls. We all know what happened next. Then, in December 2010, she told him something else—on 60 Minutes, no less!—about looming defaults of state and municipal debt, and all hell broke loose in the municipal bond market.

Ms. Whitney endured a heaping of scorn from entrenched muni players for that second call—the pile-on was chronicled in this paper—which only intensified when that wave of debt defaults failed to materialize. She was an attention whore, the riposte went, and had arrogantly wandered into a realm she did not understand. Ms. Whitney responded that she knew exactly what she was talking about, that people just needed to be more flexible in how they define “default.” A local government that meets its debt payments by slashing its K-12 education budget in half has “defaulted” on its “social contract” with taxpayers to keep the community strong. (I wrote about this in the Wall Street Journal magazine in September 2011 and followed up on Fortune.com in March 2012, at which time I pronounced her the winner of this argument.)

Ms. Whitney was clearly irritated that some questioned her motivations rather than addressing the substance of her remarks. And then she went quiet, largely eschewing the spotlight and communicating only with clients. Until last week. On June 4, Portfolio released her first book, Fate of The States: The New Geography of American Prosperity, bringing the hammer down on those who questioned her intentions. Allow me to summarize her very convincing conclusions, which are backed up with page after page of unadulterated fact: we’re all screwed. Except if you happen to live in one of 17 flyover states in the country’s central corridor. In other words, we’re all screwed.

If Ms. Whitney—a striking blonde partial to Armani and pearls—has shown herself a shrewd cultivator of her own image, she is nevertheless a data geek at heart. (And who says you can’t be both?) What’s surprising about her book is that, while it’s packed to the gills with statistics—most of them very large and ominous numbers detailing the ongoing fallout of the reckless
borrow-and-spend binge that most state and local governments engaged in during the real estate boom—it’s still a breezy, albeit chilling, read. I couldn’t put it down, even though it was thoroughly depressing.

Her main point is that the combination of debt service on state and municipal borrowing and ever-growing public sector pension and health care costs is crowding out everything else in government budgets—things like education, libraries, parks and trash collection, and public safety. John DeStefano Jr., the mayor of New Haven, put it best: “[Pension costs] are the Pac-Man of our city budget, consuming everything in sight.”

And here’s what’s going to happen: because taxpayers—both corporations and individuals—can actually pack up and move to avoid a dramatically lower quality of life and the final tax bill on municipal borrowings, Ms. Whitney sees a radical redrawing of the economic power map. Those 17 flyover states in the central corridor are going to emerge as winners, while the overleveraged housing-boom high-fliers like California, Nevada, Florida and Arizona grapple with what she calls the Negative Feedback Loop From Hell—higher debt requires higher taxes, which drives people and companies out of town or state, which lowers the tax base, which results in further budget cuts, which reduces quality of life, which causes the value of real estate to decline, which lowers tax receipts, which … you get the point. It’s called Detroit.

We’re approaching the endgame quickly. While states have been able to put Band-Aids over their budget gaps to date by using rainy-day funds, stimulus money or muni market borrowing, or by raising taxes, “these levers have all already been pulled,” writes Ms. Whitney. The states have taken on close to $1.5 trillion in new debt since 2000, almost doubling their borrowings in the process.

So how will it all come to a head? In the same way it already has in a smattering of locales around the country: with a nasty showdown between public-sector employees, their taxpaying private-sector counterparts, muni bond investors and governments themselves over just where the most painful cuts are going to be made. “[The] impending war over public-employee pensions threatens to be one of the more vicious political debates this country has seen,” writes Ms. Whitney, “pitting Americans against Americans, neighbor against neighbor.” She backs up her dire outlook with page after page of depressing shit. In 2000, eight states had poverty rates over 15 percent; in 2010, 22 states did, plus Washington, D.C.

Ms. Whitney makes clear that there are only so many possible solutions. First: slash those public employee pensions and health insurance coverage. She also points out that the U.S. has lagged far behind Europe in privatization of public assets like toll roads and bridges, and the time to consider it is now. Likewise outsourcing of everything from school systems to trash collection to government itself. Shared services are a final, albeit paltry, option—Bronxville and Tuckahoe aren’t going to save much by sharing a library, but it’s a start.

While some of it smacks of small-government conservative ideology, it really isn’t. What it’s about, Ms. Whitney says, is “kitchen table economics” “You can’t keep spending more money than you make forever,” she told me. “That’s just math.” Or, as the man from Hibbing might say, “State gone broke, the county’s dry.” (Maybe not for long. Another revenue-boosting option on many tables is allowing alcohol sales in long-dry counties.)

The “new geography of American prosperity” in the title of her book refers to the promising future for the minority of states that showed anything approaching a modicum of fiscal restraint during the boom, or those that have politicians who have shown anything approaching political courage in terms of making hard choices in its aftermath. Whitney shout-outs go to Florida’s Rick Scott and Indiana’s Mitch Daniels. No, I don’t want to move to Texas either.

On that note, here’s a humdinger of a stat: in April 2012, the cost of renting a U-Haul one-way from California to Texas was twice that of the same trip in reverse. That suggests that the demand for trucks leaving California is twice that of the demand for trucks headed there. In other words, this isn’t a theoretical movement of people and companies from some parts of the country to others—it’s happening right now. In 2011, Whitney points out, biotech outfit Biogen Idec relocated 300 people from San Diego to North Carolina; Intel decided to build a $3 billion research center in Oregon, of all places; and medical device giant Medtronic relocated 300 jobs from Los Angeles to San Antonio.

So does she consider the argument with her muni market detractors closed? “Look, it took a whole book to explain where I was coming from,” she says, showing a glimmer of a conciliatory stance. But then it’s gone. “People don’t want to think differently, so when you challenge them, they attack you. I wrote the book for a number of reasons, but one of them was just to say, ‘Come on fellas, let’s not distract from the much larger issues here. This is only going to get uglier from this point forth.’” She will find no argument there. 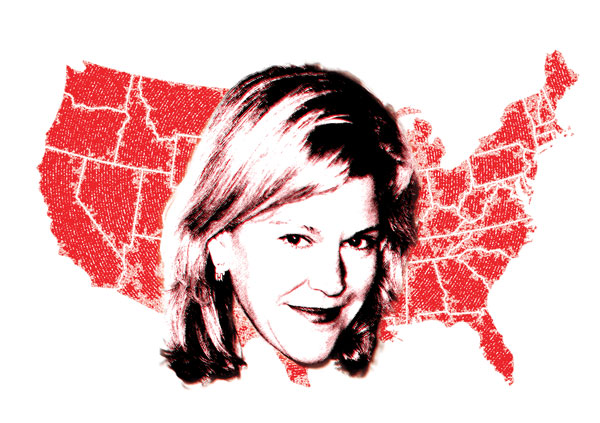 Filed Under: Politics, News & Politics, wall street, Up & Down the Street, Meredith Whitney