‘The Comedy of Errors.’ (Photo by Joan Marcus)

Your stalwart theater reviewer faces a great and ongoing occupational hazard, at which he has from time to time hinted in these pages: he doesn’t really care for Shakespeare. He ought to, he knows—history’s greatest English-language dramatist, timeless lessons and ongoing moral dilemmas, peerless poetry, yada yada—but instead, often, philistinically, he cowers before another endless evening of women wearing hats and their husbands thus not recognizing them. To compound this problem, your humble reviewer’s favorite spot in the five boroughs is the glorious Delacorte Theater in Central Park, Joseph Papp’s urban-bucolic temple to free Shakespeare. From time to time you’ll see a Sondheim show there, or Hair or Brecht or an attempt to revivify Paul Simon’s failed musical, but mostly, to enjoy the Delacorte is to endure Shakespeare. Not infrequently in the rain.

And then there’s The Comedy of Errors, which opened at the Delacorte last night as the first half of the Public Theater’s Shakespeare in the Park series for this summer. It’s the most fun, silly, enjoyable, accessible, engaging, all-around delightful Shakespeare production I’ve ever seen. If I could, I’d go back and see it again, even in the (irritatingly frequent this spring) rain.

The director Daniel Sullivan, a Shakespeare in the Park veteran, has taken the Bard’s light comic tale of mistaken identity—a man and his slave from Syracuse, on the hunt for their long-lost twin brothers, unknowingly find them in Ephesus, where both pairs share the same name and the same appearance, to everyone’s great confusion—and set it in Prohibition-era upstate New York, where the Duke of Ephesus looks, dresses and sounds like a Guys and Dolls supporting player and the Syracusans arrive on an Adirondack Trails bus that also stops in Schenectady, Troy and Utica. As scenes change, there are quick blasts of big band music and swing dancers boogying across the stage. The actors give their lines a mostly modern reading, some with vaguely gangster-movie accents. It’s a charming conceit, fully embraced by the cast, and it helps make the production the superbly executed farce that it is.

But it’s the farceurs who make a farce, and Mr. Sullivan is blessed with two hilarious and very game leading men: Hamish Linklater as the merchant Antipholus and Jesse Tyler Ferguson as his servant Dromio. Typically, four men are cast to play the two sets of twins, but Messrs. Linklater and Ferguson handle the doubling with gusto.

A cynic, or a purist, might complain that casting two sitcom stars in four slapsticky roles guarantees a broad, hammy, pause-for-laughs evening; an honest observer would retort that the two have done several seasons of Shakespeare in the Park and here deliver impeccable performances, using all their comic expertise—in timing, delivery, physical business—in service of Mr. Sullivan’s conception. Mr. Ferguson, in a vaudevillian bowler and oversized checkered suit that might have been borrowed from Bill Irwin’s closet, is an eager and excellent clown; watching Mr. Linklater’s amiability melt into fury is the night’s pleasure.

The rest of the cast is equally excellent, if not always as clownishly funny, notably Emily Bergl as Adriana, the confused wife of Antipholus of Ephesus, and Heidi Schreck as Luciana, her sassy sister. As Egeon, the sad-sack father of the two Antipholuses, Jonathan Hadary gives the evening’s most subtly amusing performance.

All’s well that ends well, someone once said, and by the end of this 90-minute Comedy of Errors, all has ended well: for the Antipholuses and Dromios, who’ve found their counterparts and found love, for the people of Ephesus, and for the rest of us, who get to walk home through a balmy Central Park after a fun, funny night of Shakespeare that even an ignoramus reviewer can’t help falling for.

It’s also becoming increasingly hard not to fall for the Claire Tow Theater, Lincoln Center Theater’s new stage for young playwrights, perched atop the company’s Saarinen-designed ancestral home at the Vivian Beaumont. This is in part because the space is so stunning, with a glass-walled lobby and terrace offering hedge-funder views across the Lincoln Center campus and the Upper West Side, and partly because the quality of work in the year-old venue has been so high, from its inaugural Slowgirl to the Pulitzer-winning Disgraced to the literate, unexpected and very enjoyable new A Kid Like Jake, which opened there Monday night.

Written by Daniel Pearle and directed by Evan Cabnet, A Kid Like Jake tracks a bobo-yuppie New York couple (Carla Gugino and Peter Grosz, who give affecting and nuanced performances as well-intentioned, angst-ridden, stressed parents) as they make their way through the only-in-New York trauma of trying to get their son into a good kindergarten. (The set by Andromache Chalfant nicely renders their airy-but-not-spacious mid-century-decorated loft and serves effectively as several other locations.) But what begins as a sort of pleasant drawing-room comedy about the real but not particularly sympathetic pressures of acing the ERB and facing the daunting odds of getting your kid a spot at Dalton or Trinity takes a sharp and welcome turn into far more interesting territory during a session with Judy (Caroline Aaron), Jake’s nursery-school director-cum-admissions coach. “You might,” Judy tells Alex after reviewing her application essay, “use that as a lead-in to talk a little about his gender-variant play.”

What follows is a fascinating exploration of how parents, in this progressive city in this progressive era, deal with a son (unseen throughout the play) who is by all accounts smart and charming and likes to wear skirts and play with dolls. Is it best for him to be in a school that caters to “creative” kids—say, a St. Ann’s—or is that already pigeonholing him? What is the difference between being strategic in applications and creating an affirmative-action stereotype? And who’s to say that the whims of a 4-year-old are indicia of anything more than a phase? Mr. Pearle does a particularly nice job of dramatizing how these two seemingly simpatico parents react slightly differently to these questions and how those differing reactions multiply and exacerbate and begin to drive them apart.

As we head toward the climax, when the parental feuding becomes the dominant, and more run-of-the-mill, story line, the play becomes both more histrionic and less interesting. But when it’s focused on parental difficulties caused by this unique kid going through this unique process in this unique city, rather than on marital difficulties, A Kid Like Jake is, like Jake, and like its venue, something special.

Charles Ives Take Me Home, an odd duck of a new play by Jessica Dickey that opened last week at the Rattlestick Playwrights Theater, starts off as something special too. Its great disappointment is that it soon enough devolves into a dull and predictable take on a father who just can’t understand his daughter. It remains structurally interesting and offbeat throughout, but its leaden messaging—dad loves music, daughter loves basketball, and they just can’t connect—makes for a dull evening.

A Modernist composer working in the early part of the 20th century, Charles Ives was also an accomplished athlete, and he serves as narrator and a sort of lodestar for this play. Portrayed with  goofy professorial charm by Henry Stram, Ives welcomes us to the theater, and to this story, which then flashes back to show us Laura (Kate Nowlin) growing up obsessed with basketball and eventually becoming a college coach, while her divorced father, John (Drew McVety), remains focused only on his music and is dismissive of his daughter’s calling. The best part of the play is how Ms. Dickey has constructed it, bouncing back and forth in time and between the characters, scenes sometimes overlapping, with Ives—John’s idol and his onetime instructor at Julliard—as commentator and fulcrum.

Daniella Topol’s direction is smooth, and the set—again by Andromache Chalfant—is a wood-floored and -walled room that serves as both a basketball court and a rehearsal studio, effectively underlining the obsessive similarity between father’s passion and daughter’s. That the father remains so willfully, and inexplicably, blind to that is what makes this play, otherwise quite compelling, ultimately unbelievable. 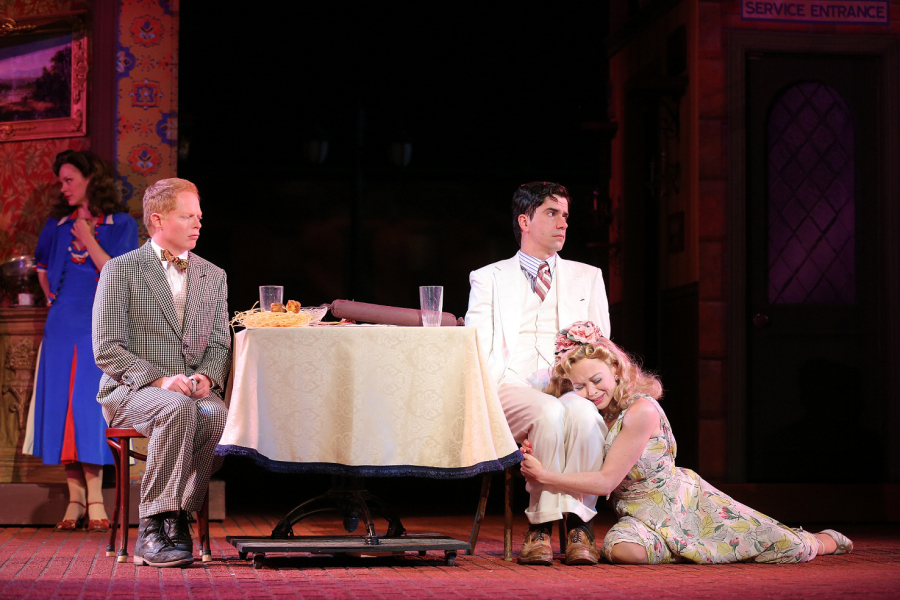