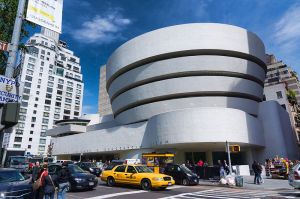 The Solomon R. Guggenheim Foundation, which operates the museums of that name around the world, announced today that it would add two new members to its board. Todd Boehly, president of Guggenheim Partners LLC (which recently purchased the Los Angeles Dodgers), and Alexander Nemerov, a professor of art history at Stanford University, join the board following a vote on May 21.

NEW YORK, NY – June 24, 2013) — William L. Mack, Chairman, and Jennifer Blei Stockman, President, Solomon R. Guggenheim Foundation, today announced that Todd Boehly and Alexander Nemerov were elected to the Board of Trustees at the May 21 meeting of the Board. “The Trustees join Director Richard Armstrong in welcoming two new members of the Board, Todd Boehly and Alexander Nemerov,” said Mr. Mack and Mrs. Stockman. “Todd brings a vast experience of financial management to the institution, and Alexander has made tremendous contributions to the field of American art history through his teaching and publications. They will both be valued advisors, bringing to the Board of Trustees a fresh and beneficial perspective.”

Alexander Nemerov
Dr. Nemerov is the Carl and Marilynn Thoma Provostial Professor in the Arts and Humanities in the Department of Art and Art History at Stanford University. Most recently serving as Chair of the Department of the History of Art at Yale University from 2009–2012, Dr. Nemerov has also previously taught at both Stanford and Yale in varying capacities since 1992. Deeply engaged in scholarship, Dr. Nemerov regularly contributes to the field of the history of art by authoring books, exhibition catalogues, articles, and essays, as well as by participating in conferences and invited lectures. He has been awarded fellowships from the Smithsonian Institution and Stanford and has curated exhibitions at the Smithsonian American Art Museum, Norman Rockwell Museum, and the Wistar Institute. Dr. Nemerov holds a PhD in the History of Art from Yale and a BA from the University of Vermont.