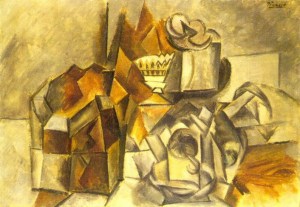 The U.S. has blocked a private sale of Picasso’s Fruit bowl and cup (1909) at the request of the Italian government. The painting is worth $11.5 million.

The owners of the work, Gabriella Amati and her husband, the late Angelo Maj, were charged with embezzling $44 million from Naples, and allegedly purchased the painting illegally.

More from the BBC:

Agents working for U.S. Immigration and Customs (ICE) located and recovered the painting in New York, where it was being offered for sale on 21 May.

The Justice department has assumed control of the painting after U.S. District Judge Victor Marrero signed a restraining order following the formal request from Italy.