Baraka’s not ready to endorse a candidate in the four-person field, but he’s having discussions with U.S. Rep. Frank Pallone (D-6).

“The mayor’s ahead, according to the polls, but that’s a popularity contest and I don’t think it’s real,” Baraka (pictured) told PolitickerNJ.com. “When Pallone gets on the ground and in these communities he will have the opportunity to make that gap smaller.”

Asked about the candidacy of Speaker Sheila Oliver (D-34), Baraka said it puzzles him.

“I don’t see Sheila unless she is stepping away from Joey D,” Baraka said, referring to her U.S. Senate bid. “I haven’t spoken to her. At least Pallone is here trying to make some relationships happen. I think he has a progressive record, but his name recognition is not what it should be. He needs to get on the streets more, and I think he’s showing a willingness to do that.”

Then there’s Booker’s other dedicated local foe, veteran state Sen. Ronald L. Rice (D-28), who ran for mayor in 2006 and lost to Booker.

“But my preference would be so anybody but Booker,” he said. “I think Sheila Oliver is a good choice.”

He said he likes Pallone, but feels closer to the homegrown Essex County speaker. 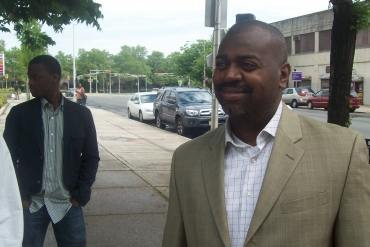