It began outside a subway station in Harlem, where Anthony Weiner greeted–and embraced—New Yorkers on their way to work.

Next, he eschewed the Memorial Day parade in his old district for a sparsely-attended black church service in Southeast Queens and a veterans ceremony in the Bronx’s Co-op City. And this weekend, he slammed stop-and-frisk at Rev. Al Sharpton’s weekly National Action Network rally, earning loud applause from the mostly-black crowd.

Mr. Weiner’s spokeswoman, Barbara Morgan, insisted it’s too soon to talk about strategy nearly three weeks into the ex-congressman’s comeback race. But the campaign’s carefully-curated stops, which typically number fewer than his rivals—might also reveal something about the polling that convinced him to jump into the race in the first place.

Voter research conducted by one rival campaign revealed an interesting finding: that black voters seemed to be more forgiving of Mr. Weiner’s online dalliances than other groups.

“Our analysis is that there’s a bit of a trend of African-American voters being more sympathetic to people who have experienced scandal–Democratic politicians who have been vilified by the right and beat up in a way that feels like they’re being vilified in the press,” said one Democratic operative, pointing to the reaction to scandals involving former President Bill Clinton and Congressman Charlie Rangel.

“There’s clearly something there where higher rates of voters in the African-American community seem to be willing to forgive him,” he said. “They feel like these people haven’t betrayed us on the issues, … they were good on the issues, but messed up in personal failure and now are getting treated in an unfair way.”

The theory also seems to be backed up by the polls. The most recent Marist survey, for instance, found that 66 percent of African-Americans surveyed believe Mr. Weiner deserves a second chance, compared with 45 percent of whites and 55 percent of Latino voters. Just 27 percent of blacks told pollsters Mr. Weiner didn’t have the character to be mayor–versus nearly 50 percent of whites.

And a May 22 Quinnipiac poll found that while Mr. Weiner was favored by just 11 percent of whites voters, he had the support of 20 percent of black voters—besting every other candidate—including former Comptroller Bill Thompson, the contest’s only African-American candidate, who garnered just 13 percent of the black vote.

In fact, Mr. Weiner, the only Jewish candidate in the race, doesn’t fare nearly as well among the Jewish voters he’s been courting, the Marist poll found.

It was the same way during the Monica Lewinsky scandal, when black lawmakers and voters rallied around Mr. Clinton, according to reports from the time. One Washington Post poll, for instance, found that, in the scandal’s aftermath, 94 percent of African-Americans believed Mr. Clinton was a strong leader, versus just 62 percent of white respondents. They also gave Mr. Clinton higher ratings “in virtually every category including job approval, trustworthiness and his ability to relate to average Americans,” the paper wrote.

Chet Whye, a Harlem community activist who saw Mr. Weiner speak Saturday at Mr. Sharpton’s House of Justice, said that he has long been a fan of Mr. Weiner and said he was among those who had already dismissed the Twitter scandal that forced Mr. Weiner to resign from Congress two years ago.

“If this guy’s gonna be good for this city, that’s all that matters to me,” he explained, arguing that many officials he respects have also made mistakes. “We’ve had great leadership come out of people who are flawed. Look at Bill Clinton. To me, it’s something–it was stupid. He acknowledges that. I’m past it.”

He also noted Mr. Weiner’s first campaign stop at the corner of 125th Street and Lenox Avenue. “That was a signal to us that we were not going to be ignored,” he said. “He could have been anywhere. He came here.”

Peter Bailey, another black voter who lives on the Upper West Side, agreed he wouldn’t hold the scandal against Mr. Weiner and would instead look to the candidates’ policy proposals. But he said the idea that black voters were more inclined to forgive rang true.

“I think black people traditionally have a feeling for those that come out of the cave still fighting,” he said. “That’s the position that black folks come out of so we can always relate to somebody fighting when they’ve been kicked down.”

In addition to helping shed light on Mr. Weiner’s strategy, the numbers might also put an interesting wrench in the conventional wisdom that Mr. Weiner’s jump into the race is most damaging for City Council Speaker Christine Quinn (by making a run-off nearly guaranteed) and Public Advocate Bill de Blasio (who, the theory goes, is targeting the same middle-class, outer-borough, progressive voters as Mr. Weiner).

Perhaps Mr. Weiner is also a threat to Mr. Thompson—whose campaign has most enthusiastically embraced Mr. Weiner with open arms? The Thompson campaign however, dismissed the early polls, which have historically under-counted support for minority candidates.

“Before Anthony ever got in, I predicted he’d be in second place and he still is, because these polls measure one thing right now – name recognition, no more and no less,” Mr. Thompson’s chief strategist Jonathan Prince said in a statement. “Bill Thompson’s numbers are underweighted because polls consistently underestimate minority turnout and support.”

(It’s worth noting the other candidates have been making plays for minority voters, too. Ms. Quinn, for instance, has been courting Hispanic women, while Mr. de Blasio, whose wife is black, has picked up endorsements from the heavily minority Local 1199 SEIU and New York Communities for Change.)

For his part, Mr. Weiner rebuffed the idea that there was any motivation behind his stops, portraying the campaign’s strategy as a largely on-the-fly, by-the-bootstraps effort.

“Some of it is how enthusiastic the invite it … And some it is just like how it feels, you know. We chose that church ‘cause that particular church had an interesting story,” he told Politicker recently when asked about how he was choosing his stops.

“We’re going to get to everywhere. And some of it just based on our bandwidth as an organization. We’re kind of like a start-up at this point,” he added. “The driver knows one neighborhood, we’re like, ‘Ok! That looks good to me!’”

Consultant Bill Cunningham, Mayor Michael Bloomberg’s former communications director, also cautioned that it’s too early to read much into the schedule tea leaves and early polls—aside from a general desire by the candidate to appear engaged with voters city-wide.

“What he’s saying by doing that is that he’s going to be campaigning throughout the city. He’s not just relying on his old bastions of Brooklyn and Queens … and this is how I prove it,” Mr. Cunningham explained.

It also sends a message that Mr. Weiner is out of hiding two years after he was forced to resign. 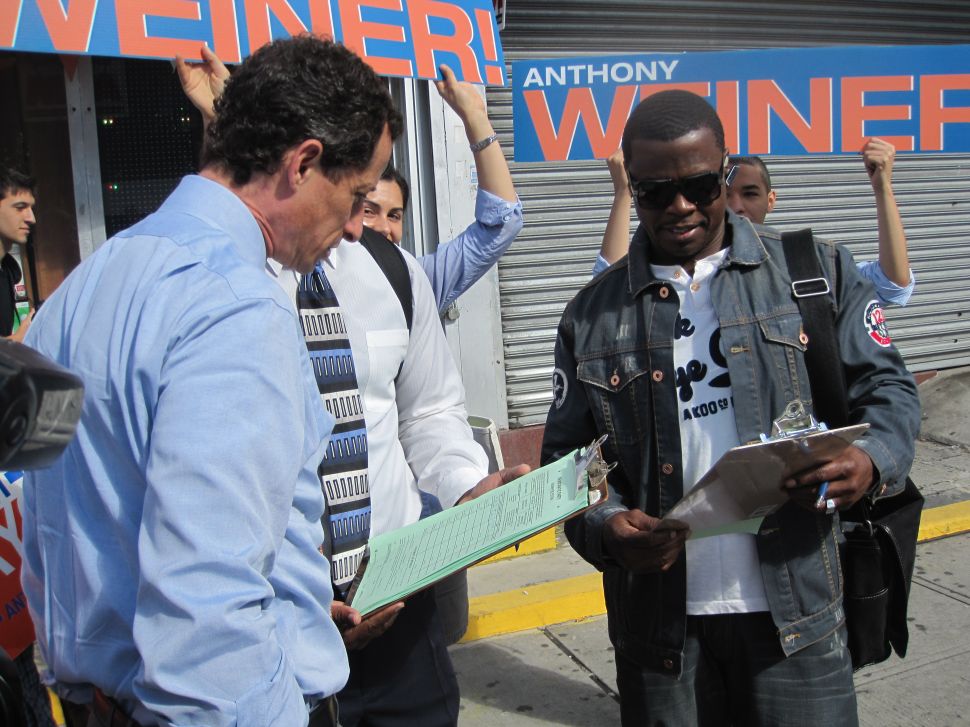