He dominated on every level of the game this week. He crushed Buono in all the polls; showed off the diamond pairing of Stack and DiVincenzo – and their attendant allies as the Democratic Party writhed in agony; defeated the plaintiffs in the appellate division of state Superior Court who wanted his decision on the timeline of the special Senate election reversed; and, as the consummate political animal, enjoyed the developing Democratic Party donnybrook among Booker, Holt, Pallone and Oliver. Oh, and he finished the week next to Bill Clinton in Chicago to help promote the former President’s global leadership initiative.

Mr. Wonderful kicked off his U.S. Senate candidacy this week, proving, unless that was actually a hologram of himself at the podium, that he actually exists outside the Twittersphere.  His two Central Jersey Democratic Primary opponents talk about advancing progressive causes with the kind of clarity and commitment that can only irk the organization bosses and make them want to double down on getting the vote out for the Newark Mayor. Pallone and Holt also are coming across early as the smartest man in the room and his mirror image, more than separate and distinct personalities. Oh, and the New Jersey Education Association (NJEA) will stay neutral in the Democratic Primary, arguably the pro-voucher Booker’s biggest win of the week.

Kicked around in the headlines for a few months, the U.S. Senator went back to his home county of Hudson to regenerate. He put a beat down on Bayonne Mayor Mark Smith, helping to drive Smith out of his chairmanship of the Hudson County Democratic Organization (HCDO) as payback for Smith backing Nia Gill over Donald Payne, Jr. in the 2012 special CD 10 election for U.S. Congress. Even better, the newfound peace between state Senators Brian P. Stack and Nick Sacco portend good things for Hudson County going forward.

You want a perfect municipal election result? Check out Fulop’s wins this past week, which on paper reveal that he will become mayor with a 7-2 council. But it’s actually even better than that, as the two former Jerry Healy allies on Fulop’s ticket (Nidia Lopez and Sean Connors) lost on Tuesday, ushering the way in for two independents on the council: Michael Yun and Richard Boggiano.

He’s made peace with Brian P. Stack; not because he loves him, but because Stack doesn’t have the money to fight Sacco and Sacco doesn’t have Stack’s guerrilla army. That means he won’t have to worry about fighting the daily Tommy guns and running board style wars the two bosses have waged these past six years. That’s likely to change at some point, but in the meantime, Sacco’s charge, Assemblyman Vincent Prieto (D-32), Secaucus, assumed the chairmanship of the Hudson County Democratic Organization (HCDO); and maybe, just maybe, Sacco won’t have to listen to Stack’s main ally Christie hound him statewide as he has for the past year.

The 38th District GOP candidate for state Senate received a boost Tuesday with the official announcement by Assemblywoman Connie Wagner (D-38) that she will not go before the voters this year. Wagner’s retirement wounds Alonso’s opponent, incumbent state Sen. Robert Gordon (D-38), who two years ago depended on Wagner’s brand to help boost his own. Compounding Gordon’s challenge this year is the fact that Alonso is running with popular Republican incumbent Christie.

Booker’s people at midday were running out and combing the streets for more petition signatures to bulk up their boss’s already impressive submission to the state Division of Elections. But whatever the ultimate tally, Lonegan announced the most of any candidate (7,200) at the time of his squared shoulders appearance at the podium Monday. The movement conservative had a good week on top of that, as many members of the GOP establishment, including U.S. Rep. Leonard Lance (R-7) and multiple county Republican organizations, threw their support behind his U.S. Senate candidacy.

The 40th District state senator finessed both powerful Essex County Executive Joe DiVincenzo and state Sen. Brian P. Stack (D-33) to help land them in Christie’s public corner of ardent Democratic supporters. This week in many ways represented the political culmination of Treffinger’s former chief of staff on Christie’s behalf, the kid who used to rail at county meetings as the only Republican in the room, who finally found his own way through the backrooms to help the Republican governor turn Essex on its political axis – while throwing in Stack to boot.

The associate with the Morristown office of McElroy, Deutsch, Mulvaney & Carpenter; and the city’s Health and Human Services Department, were respectively named corporation counsel and chief of staff to Jersey City Mayor-elect Steve Fulop.

The CWA union leader won re-election as chair of the Perth Amboy Democratic Committee, dealing a local loss not only to Mayor Wilda Diaz but to state Sen. Joe Vitale (D-19).

Her decision to file petitions to run for the U.S. Senate landed with all the aplomb of a grenade going off in the pants of an already fragged state party organization. We got too many reports out of that Sunday night meeting to feel confident about the timeline, but somewhere between the charges of treason leveled at O’Donnell and Ray Lesniak announcing that he made James Carville, Oliver told the assembled pooh-bahs that she was running for Senate. Speculation abounds about her intentions, with some insiders arguing that she knew DiVincenzo was sticking a fork in himself by endorsing Christie and so had to leap free of him by asserting her own statewide candidacy. That same bunch insist she’s done at speaker. How can she hopscotch around the state selling herself for U.S. Senate while legislative candidates in battleground districts disappear under Christie’s tank treads?

Known to the rest of the country as the country’s greatest president, Lincoln is a much disparaged figure in New Jersey history; an “idiot,” and yes, with respect to Chris Christie’s favorite epithet for reporters, that was what General George McClellan, NJ’s preferred presidential candidate, called our beloved 16th President. We can imagine Wiz telling Currie what James Buchanan told Lincoln on their way to Lincoln’s first inaugural: “If you are as happy entering the presidency as I am leaving it, then you are a very happy man,” so it’s no great prize for the Passaic County Democratic Committee chairman to be standing above the ravages of the Democratic Party right now. Currie is a beloved figure in Passaic County, who engenders loyalty because of the class with which he carries himself and the manly bearing he has, qualities that are simply irrelevant in statewide party politics, and in fact, detrimental when one considers the moral pretzels most people have to make of themselves to survive. On the one hand it’s an honor for Currie to stand astride the party he loves. On the other, it’s kind of the equivalent of that scene in Gladiator after the war with the barbarians when Maximus looks out over the ruins of his vineyard.

It was a tough week for the Democratic candidate for governor. She trails Christie by 30 points in every poll. She also was unable to secure her candidate, Assemblyman Jason O’Donnell (D-31), the state party chairmanship, and Democrats are badly balkanized, many of them more interested in hammering someone’s knees behind the scenes than risking getting gonged in public by Christie. Notwithstanding Democrats’ efforts to project oneness behind the zen-like presence of Currie, it’s a mess. An absolute mess.

HCDO Chairman Mark Smith’s reward for being a champion diplomat and averting a war in Hudson this year was to get kicked to the curb. The reason? He landed on Bob Menendez’s bad side, which might have been bad enough, but the fact that it was when Menendez was running for re-election and trying to finesse Joe DiVincenzo put the transgression in the unforgiveable category. Then there was Jason O’Donnell, Smith’s consigliere, whose unfailing eloquence on working class issues and dedication to teachers, cops and firefighters in the South Jersey version of the Democratic Party earned him the brand of “traitor.”

The powerful executive endorsed the re-election of Gov. Chris Christie from across the aisle, which in the short term is good news for DiVincenzo, who will get a new round of budget goodies for – with respect to the late Dave Crabiel – the number 1 county in the state. In the long term, he has a tougher time. Insiders are outright saying that he’s positively finished as a 2017 gubernatorial contender, and even a 2014 re-election bid looks more complicated at this point. We’ve heard the argument from his fixers about how they’re going to throw Booker and Payne Jr. on the line and hit the snooze alarm behind a billion dollars in Democratic Party patronage and free passes to Turtle Back fun days. And it’s true that any incursions on their power have ended up in the roadkill category. But DiVincenzo’s actions could have implications in a humiliated party looking to point fingers and eager to blame. Speaker Sheila Oliver’s (D-34) U.S. Senate candidacy also left observers wondering if DiVncenzo really has the tight grip over her and others that everyone once assumed existed.

The Legislature’s only pure intellect must now redouble his stride as he goes door to door in the sprawling 38th District in search of votes to make up for the loss of Connie Wagner on his ticket. Gordon was already up against it with Christie at the top of the ballot.

The Bergen County Democratic Committee chairman lost Wagner this week, a major blow to his legislative re-election operation. He also found himself pulled into a state chairman’s battle, earning respect among that dwindling coterie of those who appreciate a man of his word, even as he suffered threats of reprisals from power players angry over his insistence on protecting O’Donnell’s doomed chairmanship.

Everybody’s favorite Jersey City detective found himself on the cold slab of politics Tuesday night, out of the Assembly and out of luck in his bid to capture a city council seat. His loss might have been the only positive outcome this entire cycle for those Healy allies seething over Connors’s defection to Fulop from the HCDO ranks.

The well-known Jersey City Councilwoman allied with incumbent Mayor Jerry Healy went down in defeat on Tuesday night along with every other trace of the Healy regime.

Trying to get something going with Lonegan’s candidacy, the Tewksbury businessman who twice ran credible movement conservative runs against U.S. Rep. Leonard Lance (R-7), Larsen couldn’t even find his way to the front of the Division of Elections press conference before Lance hit send on his emailed endorsement of Lonegan from the leafy comfort zone of the right-leaning district.

The firm pleaded guilty this week to state charges that its principals engaged in a criminal scheme to make hundreds of thousands of dollars in corporate political contributions through employees to evade New Jersey’s pay-to-play law and obtain millions of dollars in public contracts for which it should have been disqualified.

The Perth Amboy mayor crushed her opponent in last year’s mayoral election, but couldn’t  seal the deal this past week by eradicating longtime foe Dominguez-Rodriguez from the chairmanship of the local Democratic Party. 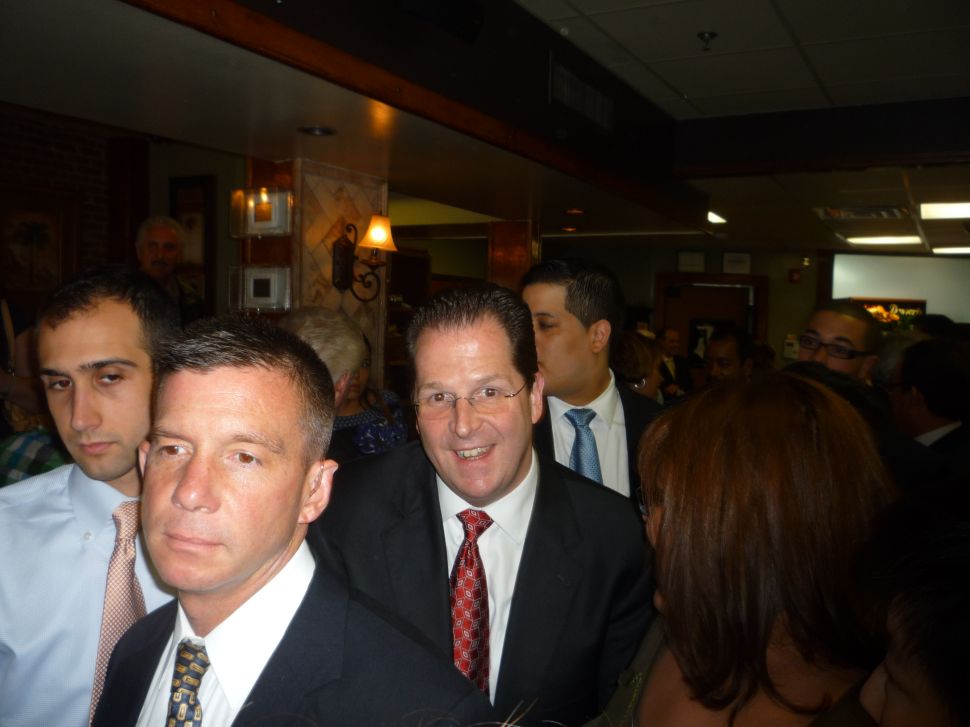