When the New York State Senate voted to legalize same-sex marriage on June 24, 2011, I was sitting on the couch with my then-boyfriend, Erik, watching the proceedings on television. We kissed, and then we walked down to Christopher Street, where the happy, sweaty, remarkably family-friendly celebrations were in full swing.

We wandered past some bars, we ran into some friends, and eventually we came back to my apartment, at which point—this is to the best of my recollection, with the caveat that my recollection may not be entirely accurate—we had a screaming fight. (I’d wanted to stay out and see more friends; he’d wanted to go home and be together. Extrovert, meet introvert.)

Before that night, we’d talked about marriage here and there, not so much in the context of “the state should validate our relationship” or even “does this make sense for the two of us?” but rather, homosexually, in terms of “this hotel would be so cute” and “matching ties or coordinated?” Now, for the first time, as New Yorkers, a wedding was a real, legal possibility. By the next spring, and the next nuptial season, we’d split.

A week or two ago, as the U.S. Supreme Court’s term was winding down and it was clear that the Defense of Marriage Act and Proposition 8 decisions would come imminently, things were looking promising with my new boyfriend, Paul. (I know, I know: more with the goyim.) The days passed, no decision was handed down, and on Friday I took him on a little surprise trip to Storm King, where we walked and talked and had a picnic under a tree, and then we spent the night at a pretentiously adorable little inn in upper Westchester, where we took a complimentary yoga class in the morning. (It was my first, and both Paul and the teacher, complimentarily, said I was very good.) By Sunday afternoon, the relationship was over. On Wednesday morning, the Supreme Court made gay marriage a federally recognized reality in the United States.

It was 10:15 or 10:30 in the morning, and once again I was on the couch, though this time away at the beach, watching on TV (surely it was for this moment that MSNBC was created), tweeting and reading tweets. I was with Chad, who is a friend and a delight but not a boyfriend and not likely to be one. Earlier that morning, in the wake of the Paul situation and before I’d cooked platonic bacon and eggs for Chad and myself, I’d reactivated my OkCupid profile. Which had been depressing enough. Now the highest court in the land, and a cable network with a full news team of happily partnered gays—from the Washington reporter on the courthouse steps to the anchor in the purple gingham to the chunkily bespectacled face of the network to the mayoral candidate brought on as a commentator—were reminding me of my singleness. Chad and I had spent the previous night, over bayfront cocktails, discussing whether we’d ever meet anyone—didn’t we already know all the gays in New York?

I’m an old maid. I’m 37, single, back on that awful dating site (no, OkCupid, a tiny twink in Aussiebum briefs is not in fact an exceptionally good match), and I do want a husband. I wish, in my singlehood, that I was the sort who reveled in the mythic, mustachioed days of New York gayness, who bristled against the strictures of the bourgeoisie, but I’m not; I’m suburban-raised and generally J.Crewed.

All this heteronormativization is only encouraging my dull, heteronormative urges: I don’t just want a husband, I want a husband while I’m at marriageable age. It’s sweet when Jim, 69, and Bill, 72, appear in the Times, marrying after 30 years together in a ceremony at their weekend home in Ulster County. It’ll be sweeter to be married in my 30s, to a man in his 30s, just like a normal couple. (Excuse me: like any other normal couple. Though one without children and with impressive collections of mid-century furniture and Playbills and Starwood points.) I want a wedding to be near the start of a life together, not near the end of it.

And yet, unavoidably, spinsterly, I just haven’t met that partner yet. (Even though my neurotic interior monologue now includes Ruth Bader Ginsburg and Elena Kagan as two more nudgy Jewish mothers, not that Elena really has a leg to stand on.) The gay weddings I imagine I’ll be going to over the next few years will be for couples who seem made for each other. Which isn’t something I had with Erik, or with Paul, or with anyone else. And Bob and Ira, the fun, funny, smart, kvetchy, menschy, loving couple I’ve long said—still say—I want to grow up to be, didn’t meet till they were in their mid-40s. So there’s time, I guess.

Meanwhile, a wry little tweet I posted moments after the DOMA verdict was announced earned me 14 retweets, 13 favorites and 84 Facebook likes—not enormous numbers, but I think my biggest ever. For now, I’ve got my social media to keep me warm. 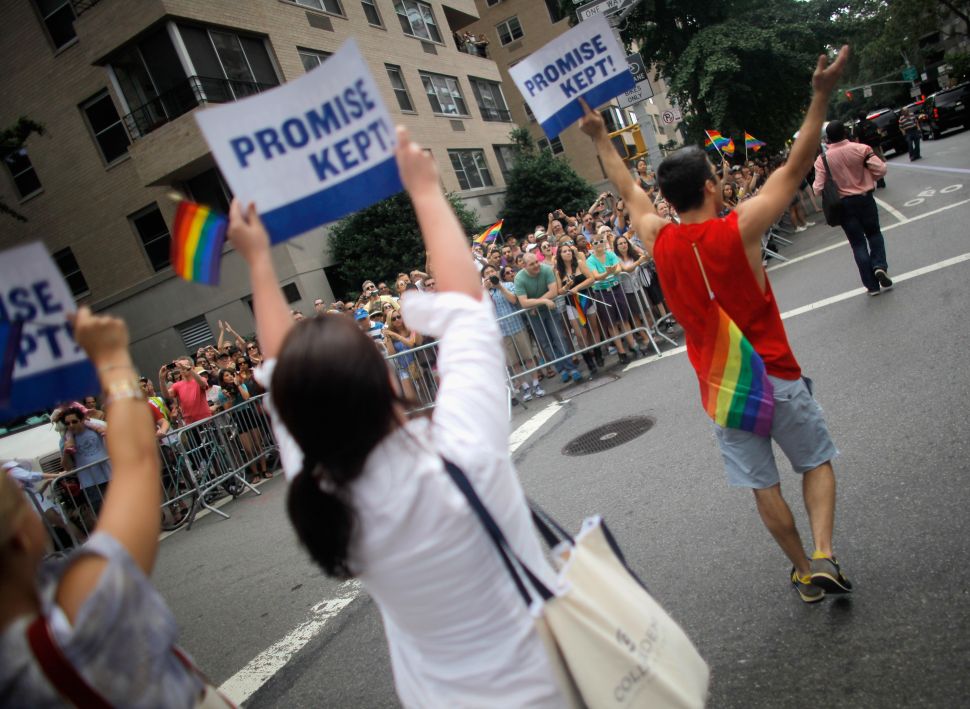