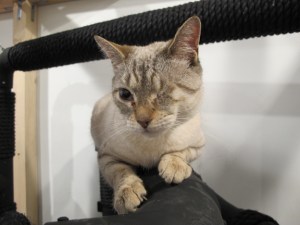 Like the dust from which we came and from which we must one day return, the Cat Show at White Columns has come and gone. Twenty-five cats were adopted during the kitty-themed group exhibition’s run, as part of the Cats in Residence program.  (That program is being continued by the show’s curator, Rhonda Lieberman, who is looking for a new venue to host it.)

Yep. There’s no greater sign that the summer is starting to wind down than the end of a Cat Show. But that’s the thing about Cat Shows. They all have to end sometime. One might say that the first rule of Cat Shows is that they can’t last forever. Uh, yeah. Go ahead and just, er, say that.