Yesterday, a baby pudu—the world’s smallest breed of deer—was born in the Queens Zoo. The Daily News was so taken by its cuteness that they published two articles about the birth. Reporter Lisa Colangelo wrote an article for the paper (which was also posted on the Queens section of the website), while reporter Deborah Hastings covered the birth for the national section.

But which article was better? Let’s compare.

First, the ledes. “The city’s biggest borough has welcomed its smallest new resident: a new baby southern pudu, the world’s smallest deer,” wrote Ms. Colangelo. “Doe, a deer, a really tiny female deer on the endangered species’ list, has been born at the Queen’s Zoo in New York City,” wrote Ms. Hastings. While the contrast between big Queens and little pudu is cute, The Sound of Music allusion is more creative. Point to Ms. Hastings.

Then there’s the reporting to consider. Ms. Colangelo talks to a zoo spokeswoman: “She’s adjusting really well. She’s very cute and still nursing,” the spokesperson told Ms. Colangelo. “She will eventually transition to solid foods.” Ms. Hastings instead provides some national context, noting that there are only 30 captive pudus in American zoos. Finally, the kickers. “Native to Chile and Argentina, pudu deer bark when they sense danger, are excellent jumpers and runners and can grow to weigh up to 20 pounds and more than 14 inches tall,” wrote Ms. Hastings. Ms. Colangelo had a similar kicker, but finished with a flourish. “Found in Chile and Argentina, the tiny deer are known for their ability to jump, climb and sprint. And, of course, be cute.” Point to Ms. Colangelo.

And…guess it’s a draw. You’ll just have to read both if you want both a national and local perspective from the same paper on the birth of a baby deer.

But of course, nobody can resist writing about a small cute baby animal at least once. This is the Internet, after all. 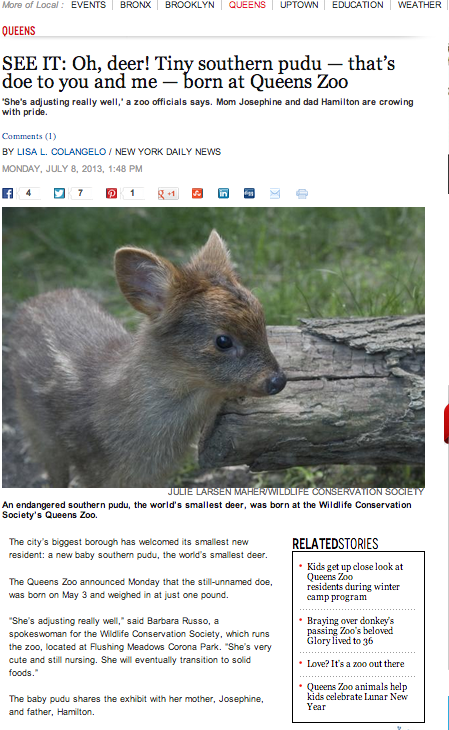