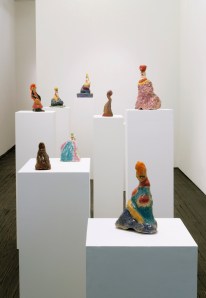 Alice Mackler’s painting Ready or Not Here I Come depicts a round female nude in a powerful black outline against a graphic orange and yellow background. Resting immovably, despite her tiny feet, on one ballooning thigh and one crooked chicken leg, she wraps her arms around the top of her chest to hide her hands behind her back while she sticks one long, brachial breast straight out, as if she could use it to shake hands or pick up a brush. Her mouth is nothing but lipstick and her eyes are nothing but blue, but her hair, against its comic-book-blond background, is a frizzy black mass. Along the upper corners of the painting are a few subtle black smudges. Though probably also acrylic, they look like dirt, as if the painting had spent the last 45 years under the artist’s bed, waiting to be discovered—and Ready or Not does, in fact, date to 1968, and this is, in fact, the 82-year-old artist’s first solo show in New York.

But the retrospective is only for context. Ten small ceramic figures, all of them untitled, dominate the show; shiny with glaze and marked with thumbnail prints and little holes for texture, they were all made in the last three years. They begin as formal improvisations, but then Ms. Mackler draws on her deep memory of posed figures—several trippy and gestural but unerring life studies hang on the wall—to fill out and fully realize whatever accidental shade of humanity has arisen in the clay. One figure is caught turning, her armless shoulders painted red for emphasis, her skirt’s swirl highlighted in yellow, its hem rippling over the surface of the pedestal. One pear-shaped figure, brown as a varnished Japanese bowl over an undertone of dark green, pockmarked and reticulated as if with lee lines, is caught with his mouth half open, in the middle of making some complaint, vivid as a William Steig cartoon. A voluminous dowager in a wobbly purple dress, with a yellow scarf, red ruff, unglazed face and giant red knob of a hat like a strawberry or a rooster’s comb, leans back, an explosive concussion of exuberance and fussiness, cautiously taking in the scene. (Through July 26, 2013)