Former Congressman Anthony Weiner, reeling from bombshell allegations that he continued sexting despite his resignation-inducing scandal, admitted to the most salacious detail this evening: That he continued contacting young women after his resignation, the birth of his son and a glossy People magazine spread that proclaimed him a different man.

With his wife, Huma Abedin, standing resolute by his side, Mr. Weiner told more than 100 reporters and photographers crammed into a midtown office building that he continued his lewd behavior for well over a year after resigning from congress.

“Look, the resignation was not a point in time that was nearly as important to my wife and me as the challenges in our marriage and the challenges of the things that I’ve done and working through them,” he said. “Some of these things happened before my resignation, some of them happened after.”

He told Politicker that he couldn’t “say exactly” when he sent his last explicit message, but that it was “likely some time last summer”–after the People magazine redemption profile, in which his wife was quoted saying, “It took a lot of work to get to where we are today.” The Dirty, the gossip website that broke the initial news, provided a sexting timeline that alleges Mr. Weiner continued contacting at least one young woman until November of 2012, when, in her words, “our relationship began to fizzle out.”

Nonetheless, Mr. Weiner vowed that all of this was now–finally–behind them.

“This is entirely behind me,” he repeated, adding, “It’s in our rear-view mirror, but it’s not far.”

After his initial remarks, Ms. Abedin, who had been standing solemnly next to Mr. Weiner, took to the podium address reporters for the first time.

“This is the first time I’ve spoken at a press conference,” Ms. Abedin said quietly before the packed room, “I’m very nervous.”

She pulled out a paper to read her statement. “Our marriage, like many others, has had its ups and its downs. It took a lot of work and a whole lot of therapy to get to a place where I could forgive Anthony,” she said, looking at her husband or down at her notes. “I love him. I have forgiven him. I believe in him. And as we have said from the beginning, we are moving forward. Thank you very much. Thank you for your time.”

Mr. Weiner also remained resolute, introducing himself as “Anthony Weiner, Democratic candidate for mayor of the City of New York” and vowing to stay in the race.

“I’m sure many of my opponents would like me to drop out of the race,” he said. “By no means does it change the fundamentals of my feeling here, and that is that I want to bring my vision to the people of New York … I hope they realize that, in many ways, what happened today was something that frankly had happened before.”

He also apologized yet again.

“The behaviors that I did were problematic, to say the least, destructive to say the most,” he said, thanking his wife for giving him a second chance. 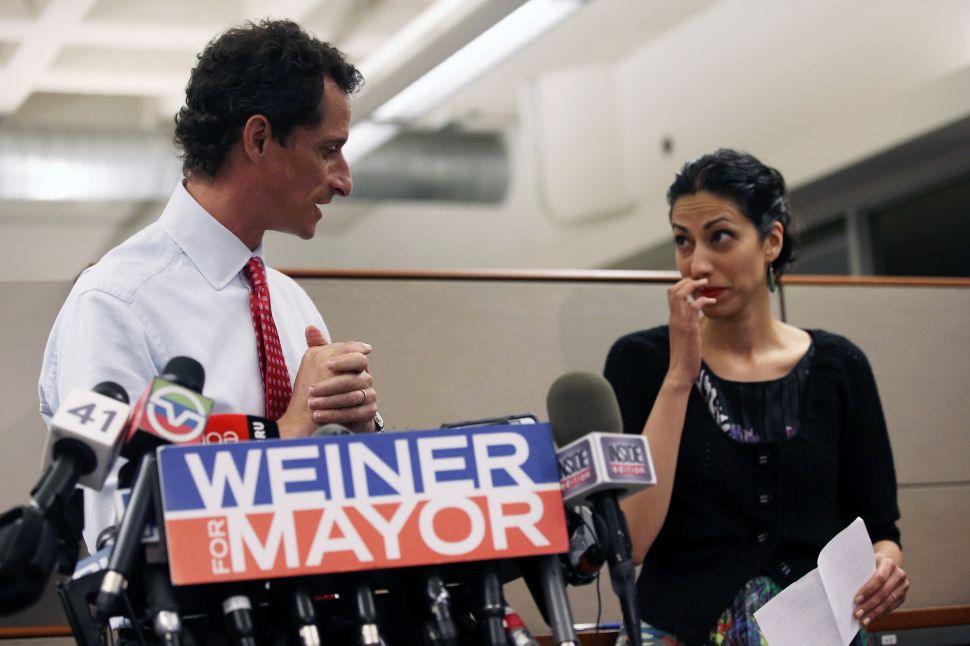