Anthony Weiner can’t escape his sexting scandal, not even on the southern tip of Staten Island–one of the farther reaches of New York City.

During a press event this afternoon in Tottenville, a local resident directly and repeatedly confronted Mr. Weiner over his escalating controversy, grilling the former congressman and questioning his “moral authority” as more than a dozen cameras clicked away.

Mr. Weiner was in the neighborhood to discuss home repair issues in the wake of Hurricane Sandy. But the media, which traveled in droves to the far-flung corner of the borough, was far more interested in Mr. Weiner’s scandals, which have driven national headlines all week.

“As a former New York City Department of Education employee, 21 years as a teacher, nine years as an assistant principal, if I conducted myself in the manner you conducted yours, my job would’ve been gone,” said resident Peg Grunda, a thicket of reporters ringing her and Mr. Weiner.

Mr. Weiner tried to defend himself, returning to a point he has often made: that his texting was a personal, private failing.

“In the privacy of your home?” Mr. Weiner asked the woman.

“I respect your decision,” he said.

But the woman wasn’t finished.

“Standing there, it wouldn’t have mattered if one year went by or five years went by. I don’t quite understand how you would have the moral authority as the head administrator in this city to oversee employees when your standard of conduct is so much lower than the standard of conduct that’s expected of us,” Ms. Grunda continued.

“Are you not voting for me?” Mr. Weiner asked.

“I would not vote for you, sir,” she affirmed.

At that point, a Fox News reporter interrupted to reiterate Ms. Grunda’s question and insisted Mr. Weiner was not answering. After a brief back-and-forth, the ex-congressman invited her to ask another question.

“I know this is going to sound a little crass, sir, how do you present yourself on the public stage?” she inquired.

Mr. Weiner tried to pivot the conversation, arguing that people should be judging him based on the ideas he’s presented or his record, rather than the salacious details of his sexting controversy.

“I need people all the time to say to me, ‘I don’t like you Mr. Weiner because of something in your background, because of a vote you cast, something in your ideas book,” he said as Ms. Grunda attempted to get a word in and steer the conversation back to his scandal. “That’s what elections are. Politicians, people running for office, need people that like them. Sometimes they need people that don’t. That’s the way the process works. But that does not mean that I stop running because I run into a person who respectfully asks me a question and they disagree with me.”

Mr. Weiner, telling Ms. Grunda his mother was a schoolteacher, repeated that he cared about the struggles of the middle class. But she was unconvinced.

“Quite honestly sir, I think you care more about your ego than anything else,” she said.

Reporters, naturally, flocked to Ms. Grunda, whose home suffered significant storm damage last year, to get her followup reaction to the exchange.

“I was offended by the tone he took with me, But then again, I can’t say I was surprised. It seems his tone with women leaves something to be desired,” she said. 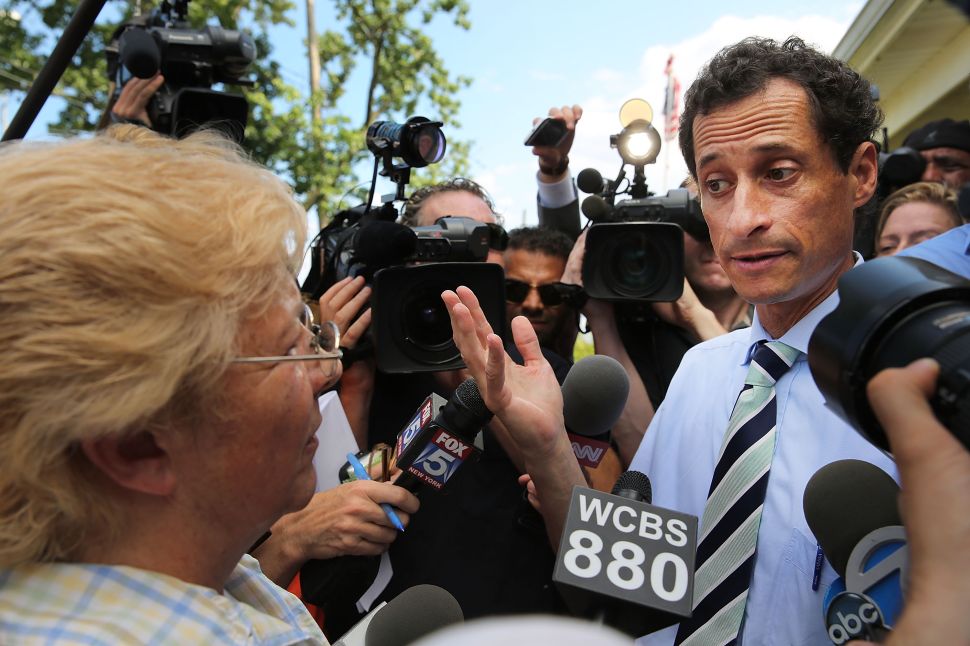