Besieged yet again by dozens of reporters and television cameras, a defiant Anthony Weiner insisted today that high-profile critics in New York and Washington were not going to drive him out of the mayor’s race.

“I don’t take my cues on policy from the Sunday talk shows listening to pundits, I never have,” said Mr. Weiner, speaking to reporters outside a Flushing, Queens senior center nearly a week into the new sexting scandal that has engulfed his fledgling campaign.

Mr. Weiner, appearing slightly more agitated than at recent press conferences, was responding to a new round of criticism from influential national figures calling for him to exit the race. On Sunday, David Axelrod, a former senior adviser to President Obama, called Mr. Weiner’s campaign “absurd” and a waste of “time and space” during an appearance on NBC’s Meet the Press. Dee Dee Myers, a former press secretary to Bill Clinton, said on CBS’s Face the Nation that Bill and Hillary Clinton would prefer if Mr. Weiner dropped out. And veteran CBS anchor Bob Schieffer, in yet another call for Mr. Weiner to leave the crowded race, labeled his bid for office “sickening.”

But Mr. Weiner reiterated that he isn’t going anywhere.

“I don’t take my cues from the headline writers in the newspapers, I never have. Those are the same people that didn’t want me to run, that didn’t want New Yorkers to have this choice in the first place,” he said.

“I don’t really care if a lot of pundits or politicians are offended by that,” he added. “I’m going to keep doing those things and I think New Yorkers deserve that choice. I’m going to let New Yorkers decide.”

Mr. Weiner also brushed off questions about who would lead his campaign in the wake of the resignation of his young campaign manager Danny Kedem over the weekend. (Mr. Kedem has declined comment on his departure.)

Upstairs, at the Nan Shan Senior Center in the heart of downtown Flushing, Mr. Weiner spoke briefly to a predominately elderly and Chinese-speaking crowd, stumping in territory that political observers believe will likely support one of Mr. Weiner’s Democratic rivals, Comptroller John Liu. Still, Mr. Weiner was chipper, addressing the seniors–seated and awaiting lunch–in English and a choppy, halting Mandarin that even he ridiculed at one point.

As he spoke, cameramen crammed the narrow aisles–a reality not lost on Mr. Weiner.

“It would be nice if they could clear the aisles so they could see,” Mr. Weiner lamented before he spoke.

The English portions of his speech, which were translated into Mandarin by Ethel Chen, a Flushing civic leader and former assembly candidate, drew mild applause from the sleepy center crowd.

“The issues important to seniors are one of the reasons I’m running for mayor. And here in Flushing, we have one of the largest senior citizen communities in the entire city,” Mr. Weiner said. “We have to make it possible for seniors to find affordable housing and the senior housing that is available can’t have a waiting list of ten years if it’s going to work.”

Known for his attention to hyper-local issues as a legislator in Congress, Mr. Weiner joked about the increasingly congested thoroughfares in downtown Flushing.

“Crossing Main Street, you need to be an Olympic sprinter to get across safely,” he said.

Ms. Chen didn’t say whether she would be voting for Mr. Weiner, but nonetheless defended the fallen former congressman.

“Right now, a lot of people are tired of all the negative [attacks] against him repeatedly,” Ms. Chen told Polticker. “There’s no law against what he has done … I read about the Clintons [calling for him to drop out] and they have no right, they have done very terrible things. He never touched anyone. He never met them. If you bought a prostitute, that is illegal. If you are doing something in your office, that’s against the law, but he didn’t do anything like that.”

After his brief speech, Mr. Weiner darted down an aisle, shaking hands with smiling seniors and repeating, in an imperfect accent, “xie xie,” Mandarin for “thank you.” Reporters stampeded after him.

“This is their choice for Sept. 10,” Ms. Chen said, referring to the primary date. “They’ll see him for what he is.” 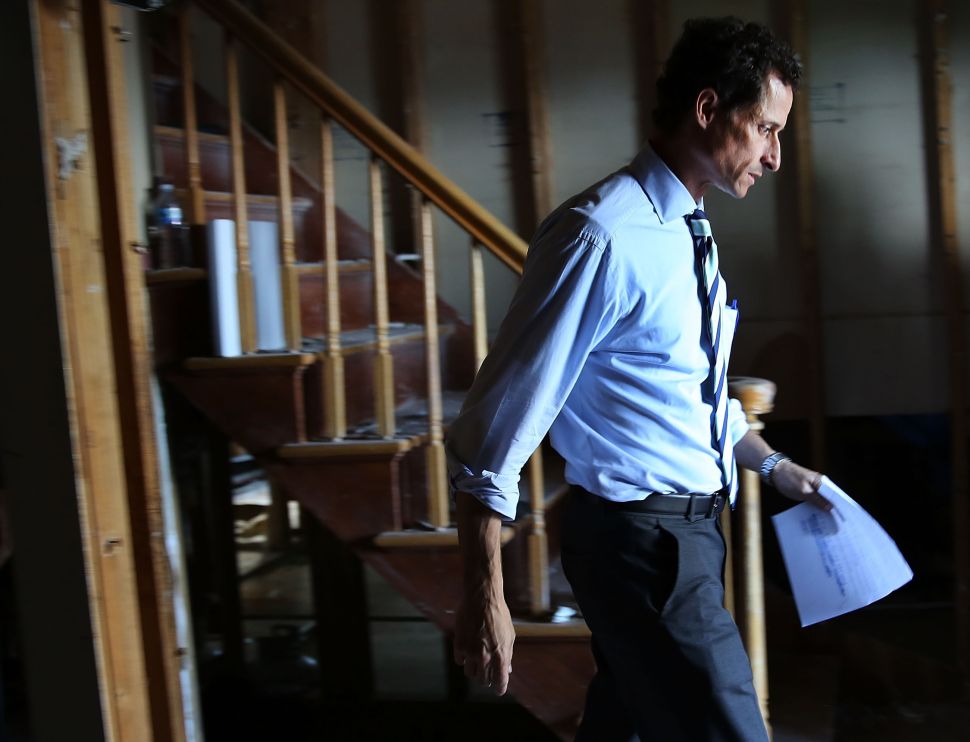