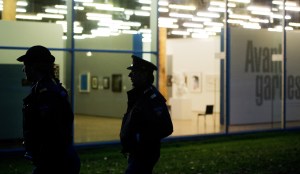 Police at the museum following the heist. (Courtesy Getty Images)

The New York Times reports that Olga Dogaru, the Romanian woman whose son Radu admitted to stealing paintings during a heist at the Kunsthal museum in Rotterdam last October, now says that she did not burn the stolen works of art.

This contradicts her earlier claim, that she did in fact burn the works, which included pieces by Picasso, Matisse, Monet and Gauguin, to protect her son. Early evidence seems also to suggest that she did.