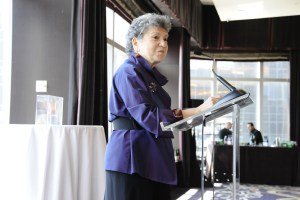 Ada Ciniglio has been tapped by ArtTable, a nonprofit dedicated to women’s careers in the visual arts, to be its new executive director. She had been serving as its acting director since July 2012.

Ms. Ciniglio has held positions at the Metropolitan Museum of Art, the Pratt Institute and the Drawing Center, and served as executive director of High 5 Tickets to the Arts, a group that distributes discounted tickets for arts events to students. Her work with High 5 earned her “Arts Manager of the Year” honors from the New York’s Arts and Business Council in 2007.

“As an organization, we recognize the important role that trailblazing women have played in the development of the visual arts as a field,” ArtTable’s board president, Jennifer Rissler, said in a statement released to press, “and we are delighted that Ada, who has been a leader in our community for many years, is stepping into the role of director at this exciting moment in ArtTable’s history.”