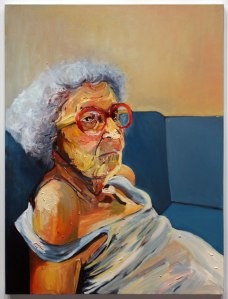 Beverly McIver paints family, friends and especially herself with acute psychological precision. Each polychrome face, like a whirlpool centered on the philtrum, consists of distinctly unmixed strokes of color. These strokes cooperate to perceive, preserve and present to the viewer a fine gradation of emotion in all its unresolved fullness, but they refuse to lose themselves in the task. It’s the opposite of analysis: the viewer must think it through herself.

Dear God Friends, Dear God, Obama and Dear God, 50th Birthday, three small oils, each with a brief prayer lettered across a white banner at the top—thanks for the support of her friends, thanks for the president’s re-election and a reflection on turning 50, respectively—all show the artist in the same round-collared blue blouse, against the same olive green background, with her eyes shut and her head leaning back in the same position. But in Dear God, Obama, her head tilts slightly toward her left shoulder, and light is on her face, lightening the colors and blending the separate strokes; in Dear God Friends, there’s a deep blackish-brown outline around her nose; and in Dear God, 50th Birthday, shadow falls heavily across her right eye.

Feeling Sharon’s Pain 1-4, painted from cellphone photos she took of herself while visiting a cousin in the hospital, show the artist’s head pressed into a pale blue wall. In the first, she has a look of concentration as she sets up the shot; in the second, she is transitioning between anguish and fear, with eyes looking up and away, mouth open in a toothless grimace, throat exposed, a solid black shadow descending in a narrow line from the point where the crown of her head touches the wall. In Feeling Sharon’s Pain 3, the bottom line of her chin is ice blue and her eyes have fallen shut as she concentrates on empathy—it’s an action of suffering now, rather than a passion. In Feeling Sharon’s Pain 4, her eyes still shut, asleep, Ms. McIver registers an oncoming nightmare with a tightening of the mouth and a slight tilt of the cheeks. (Through Aug. 9, 2013)