Mr. de Blasio, along with other protesters, refused to leave the sidewalk outside the SUNY Chancellor’s Office on West 42nd Street, chanting “Hell no! We won’t go!” as police circled in.

“Taking a stand to keep community hospitals in New York City open. RT if you’re united to #SaveLICH,” Mr. de Blasio’s campaign tweeted, along with a grainy photo of his arrest around 11 a.m.

Prior to even crossing the street, where the protestors blocked the entryway to the building, Mr. de Blasio was hardly coy about his efforts to get arrested. When City Comptroller John Liu, another mayoral hopeful also in attendance at the protest, said “I heard you’re going to get cuffed today,” Mr. de Blasio merely smiled.

Brooklyn Councilman Steve Levin, who was arrested along with Mr. de Blasio, spoke to a SUNY representative who came outside the building when the throng of protesters approached. He presented her with a petition filled with over 7,000 signatures to keep L.I.C.H. open.

“Our communities depend on Long Island College Hospital as an essential part of our health care system in Brooklyn. And we demand–we demand that SUNY fully comply with the letter of the law and all of the court orders. We will not go away, we will not back down. Our communities are united, we will stand together day after day, week after week, and many many weeks into the future,” Mr. Levin said, pumping up the masses around him.

Mr. de Blasio followed suit, bellowing at the representative of SUNY, who remained quiet and resolute throughout the noisy protest.

A security guard from SUNY warned the crowd of protestors obstructing the building that they could leave voluntarily with no charges leveled against them, but if they chose to stay, they would be subject to arrest and charges of disorderly conduct.

The crowd, including Mr. de Blasio, responded with a booming chant of, “Hell no, we won’t go!”

Soon, police secured Mr. de Blasio’s hands behind his back with zip-ties. As he was being led away, a bystander yelled, “Yeah Bill, you’ve got my vote.” Over the roaring din of the protesters, Mr. de Blasio said “We have to fight” to a throng of reporters meshed together with police officers.

When asked if his arrest was a publicity stunt, Mr. de Blasio merely turned the discussion back to Long Island College Hospital, before walking into the police van.

“[They] were both arrested because they, along with other nurses and 1199 members, refused to leave the SUNY premises–the sidewalk in front of SUNY,” Levin spokesman Matt Ojala  told Politicker. “So the police took them away. It’s an act of protest against an unjust decision by SUNY.”

The duo were among 16 carted off to a nearby Midtown precinct, according to de Blasio spokesman Wiley Norvell. Police said they had no information yet on the arrests but Mr. Norvell said Mr. de Blasio was released later in the afternoon and charged with disorderly conduct.

Mr. de Blasio has been arrested at least once before while protesting firehouse closures with actor Steve Buscemi. And today’s events appear to have been planned.

You can watch video of Mr. de Basio being arrested here: 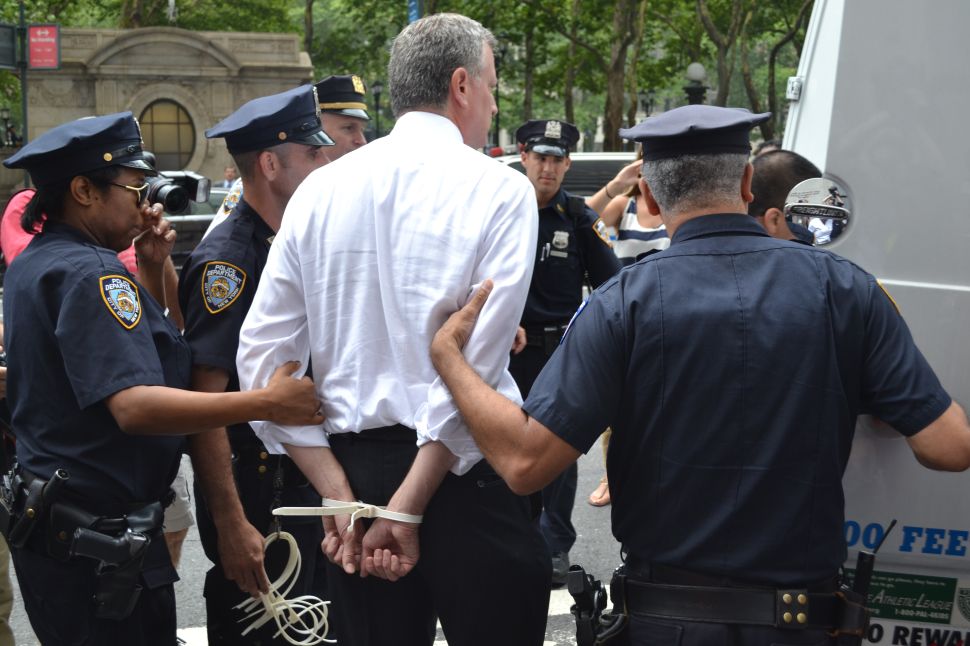