A president and a public advocate. (Library of Congress/Getty Images)

Bill de Blasio’s mayoral campaign certainly can’t be accused of having a humble view of its own candidate.

In a campaign email blast sent out this morning, Franklin Delano Roosevelt III, the grandson of the 32nd President of the United States–the man who drafted the New Deal, led the country through the Great Depression and World War II–likened the public advocate’s leadership skills to those of the legendary president.

“We needed my grandfather to help lead us out of the Depression, and we need a brave and principled leader with real vision now,” Mr. Roosevelt said.

“In his second Inaugural Address, my grandfather put forth a metric by which society should measure its progress: ‘The test of our progress is not whether we add more to the abundance of those who have much; it is whether we provide enough for those who have too little,'” he added. “Bill de Blasio knows that the test then must be our test today. He is ready to step forward to meet it.”

The email arrives on the 81st anniversary of the writing of the New Deal, prompting Mr. Roosevelt III to write that “New York [is] facing the greatest inequality crisis since the Depression.”

Prior to campaign season being in full swing, Mr. de Blasio was already reading up on President Roosevelt’s leadership abilities. In December of 2011, he told a Crain’s New York Business reporter that he was diving into two books about President Roosevelt’s first 100 days in office. And, in a line also used in today’s email, Mr. de Blasio quoted the president’s second inaugural address on Twitter in May.

“I learned two things. First, there has to be an inspirational element to what we do. FDR helped point a direction forward. The citizenry needs that. Plus, there was an admirable willingness to experiment,” Mr. de Blasio said in the Crain’s article.

But not everyone agreed with the likening of the public advocate and mayoral candidate to one of America’s most beloved presidents. Upon reading the email this morning, an incredulous rival campaign strategist told Politicker that Mr. de Blasio isn’t “a poor man’s FDR; not even a homeless man’s FDR.” 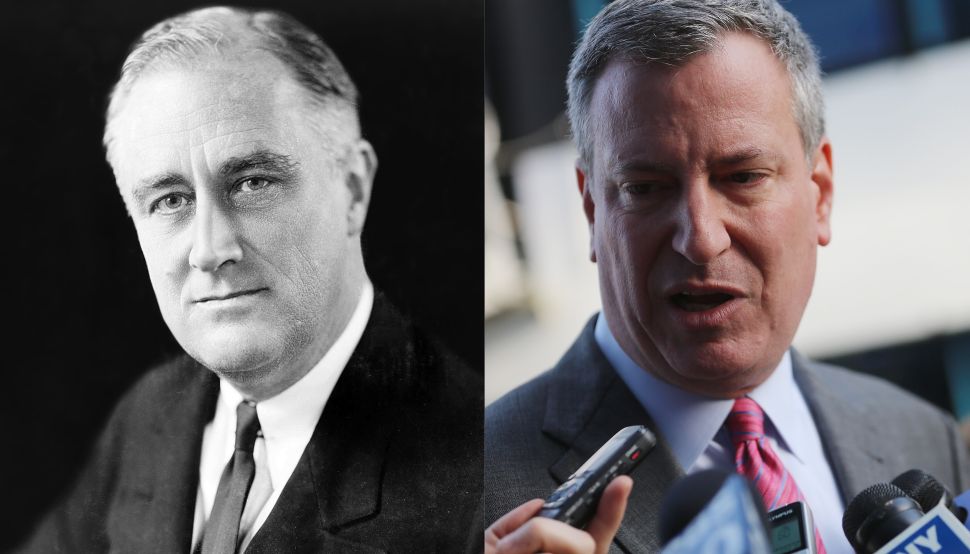