Bishop Reginald Jackson, who was accompanied by a group of ministers from across the state, endorsed the Republican incumbent’s bid against Democratic Sen. Barbara Buono.

“Why Chris Christie over Sen. Barbara Buono, who I have known for many years, and who is a wonderful, warm and genuine person, and who has given many years of service to this state? Why not again endorse a personal friend? The answer can be summed up in one word,” said Jackson, adding, “Education.”

Jackson, a Democrat, criticized fellow party members for their inability to take action on the Opportunity Scholarship Act.

“I deliberately waited before announcing an endorsement in this election because I wanted to see if the state Legislature, particularly Democrats, would vote to include the Opportunity Scholarship Act in the state budget,” he said. “And to my disappointment but not to my surprise, … my party opposed and blocked it.”

Christie said he agreed with Jackson’s statement when the bishop declared “education is the great equalizer.”

“This is absolutely an example of special interest politics controlling common sense,” Christie said referring to Democrats’ opposition to the scholarship act.

“Candidly, I think the Democratic Party takes inner city voters for granted,” he said. “They are caving in to the special interests that are funding their campaigns.”

Jackson backs the Opportunity Scholarship Act, a voucher-like pilot program in which corporations receive tax breaks in exchange for offering scholarships to low-income students. The program has received support from the governor, however, it’s failed to make it out of the New Jersey Legislature.

In 2010, Jackson criticized Democratic lawmakers for failing to take action on the scholarship act.

“The fate of this bill is in the hands of the Democratic majority in the New Jersey Legislature, especially Speaker Sheila Oliver,” Jackson was quoted as saying.

Prior to Jackson’s announcement, Buono’s campaign issued an advisory highlighting Jackson’s recent work with the governor on finding alternative ways to put a voucher-style program in place in the Garden State.

“My friend, the Democratic nominee, genuinely does not understand the harm failing schools wreaks on our children, families and communities,” Jackson said. “She said in 2011, ‘the governor talks about 200 failing schools. But in the state of New Jersey there are 2,485 public schools. I don’t think that’s a bad percentage.’”

Jackson went on to say “sadly, most of these schools are in urban New Jersey and impact minority and low-income children.”

The last time Jackson endorsed a gubernatorial candidate it was in support of Christie’s opponent, former Gov. Jon Corzine. 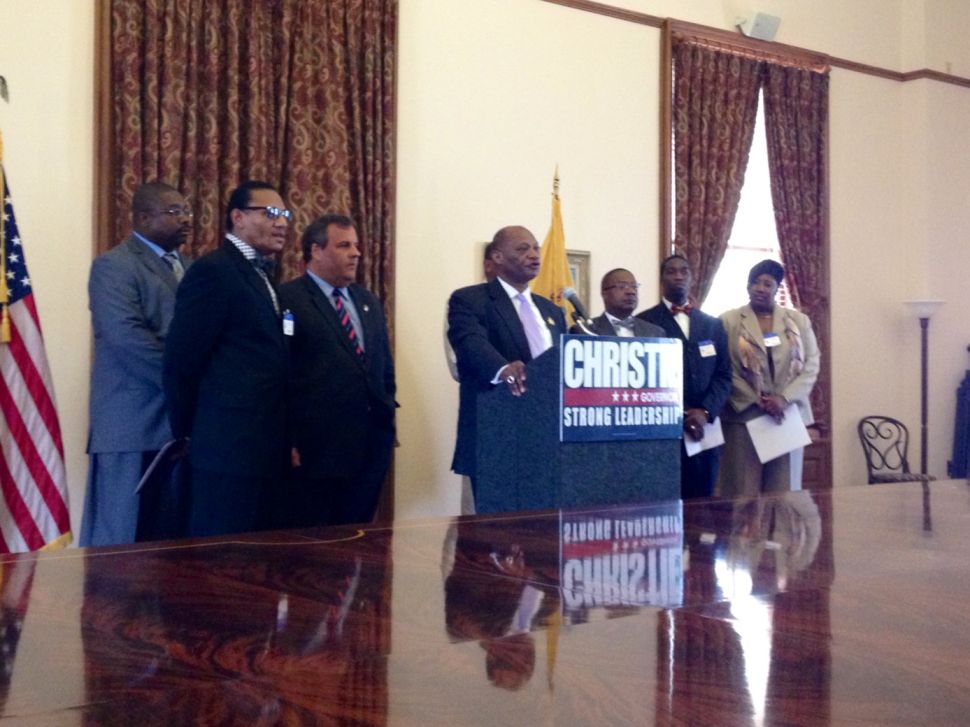