I moved to Boston after college to find my birthfather. My sole black parent, who, I’d been told, used to spend a lot of time hanging around the Berklee School of Music—not as a student, or a teacher, or any kind of staff member, just as a guy who loved jazz music, could play the guitar some (and well enough to woo young women, my white birthmother among them), and who knew that there was no chance in hell of him ever becoming a professional musician.

I found a cheap studio apartment a few blocks from the Berklee School, and soon thereafter started an internship at Blackside Productions, the film and television production company founded by the late Henry Hampton that produced the landmark Civil Rights series Eyes on the Prize. I worked as a research assistant to help with a documentary called Malcolm X: Make it Plain. It was summertime and it was hot, and the Blackside offices were on Shawmut Avenue, right on the border of the South End and Roxbury, an area that used to be far more “urban” than it is now. Having grown up in rural New Hampshire, and gone to college in bucolic Western Massachusetts, the neighborhood felt deep, loud and legit to me.

I would take the bus or walk to my internship, pass a barbershop on Mass Ave where a lot of really cute young black men work (one of them later became my boyfriend), pass Bob’s famous Southern food joint on Columbus Ave., sweat a bunch, and find my way to the Blackside headquarters, where I would sit in a small conference room, and listen to old audio-taped speeches by Malcolm X. Obviously, I knew who Malcolm X was—but despite having majored in black literature, founding a black student union, and standing in line to see Do the Right Thing on the day it opened—I don’t believe I had ever experienced live footage of a Malcolm X speech, certainly not in its entirety. And there was something about sitting in that cool, dark room, alone at a long, bare table, with a recorder and headphones and hearing his voice boom, crackly but resonant, straight into my ear.

That voice—the timbre, the power and cadence—it nearly gutted me, brought me to tears. The thunderous, exacting conviction, the elegant way he made words out of injustice and anger, all while intoning this overwhelming sense of love—love for black people, for his people, love for freedom, intellect, livelihood. I suddenly missed him terribly.

In the evenings I would walk home to my little studio, Malcolm’s voice clear and big in my head as I searched the sidewalks for a man who might look like me, who was likely very average, probably nothing like Malcolm at all. But just as important to me. My birthfather, from what I knew then and now, grew up largely in foster homes and government institutions in parts of the south and Boston, after his mother (who may or may not have been Blanche Calloway, sister of Cab) abandoned him at a very young age. He worked various odd jobs throughout his life, but loved music the most and got by a good deal on his looks. And then he fell in love with my birthmother.

I didn’t find him until a couple of years later. He was hurting. Disheveled. Proud. He was a grown black man, who hadn’t mattered enough as a young black boy. Like Trayvon Martin.

I followed the Zimmerman trial—not as closely as many, but close enough to watch Trayvon’s friend be demoralized, and to witness the stoicism of Trayvon’s heartbroken parents. I also saw the photograph of dead Trayvon that circulated the Internet just a few days ago; young, stiff, life-all-out-of-him Trayvon. White sneakers, jeans, the hoodie, lying on the ground—cold brown skin, his untended body, his unbeating heart. When the verdict of Zimmerman’s acquittal was announced, I felt sad, but what I really felt was that I wished he had mattered more to America, which is what I wished for my birthfather when I met him. And that I missed this boy, Trayvon, without ever having known him, in the same way I had missed Malcolm X with my headphones on and his voice reaching through my ears.

I moved to Boston after college to find my birthfather. What I found then, and realized only now, was the way in which I identify with and experience black culture and blackness. When one of us is hurting, or killed, I care so much. So very much. 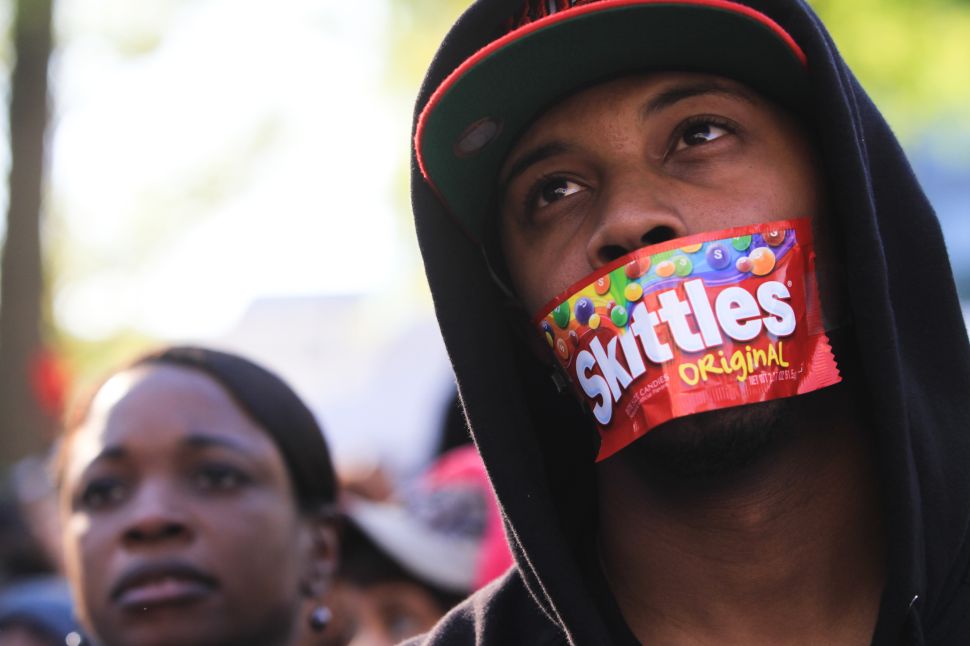