The trip to Long Island last Friday took two hours, and the Transom spent the entire time worrying that we didn’t have a parasol. We were headed to a polo match, after all, and we assumed we’d be schmoozing with socialites, nibbling canapés and discussing Kate Middleton’s uterus while thoroughbreds bounded by in the sophisticated distance. Good lord, we weren’t even wearing any seersucker!

When we rolled up to the bucolic Country Farms Equestrian Center in Medford, N.Y., we felt nothing short of shameful, certain our mangled cowboy boots were not going to cut it. But looking around, we were shocked: there was no sprawling pitch, no ladies in fascinators, just a smallish oval arena with a dirt bottom, surrounded by basic wooden bleachers. Enthusiastic spectators arrived in jeans and T-shirts.

This, we soon learned, was not the outdoor polo of English kings and noblemen; we were at the national finals of arena polo—outdoor polo’s smaller, grittier and substantially more violent cousin.

“Grass [polo] is more the elegant sport,” said pro polo player Kris Kampsen as we chatted before the big match. With shaggy orange hair, a goofy smile and a baseball cap, he looked more like extreme sports whiz Shaun White than the pretentious riders we’d envisioned. “Arena polo is more like, to the death. You’re like dripping in sweat, blood … you don’t know which way’s up or down when you’re finished.”

Played on a pitch the size of a football field—about a ninth the size of an outdoor polo field, according to Horton Schwartz, an umpire—arena polo features two teams of three players (there are four to a side in outdoor polo), and the riders compete to catapult a ball into the opposing team’s goal. “It’s like hockey on horseback,” Mr. Schwartz said.

At 7 p.m., we took our seats for the first of four periods—called “chukkers” in polo-speak. The match would be the final installment of the U.S. Open Arena Polo Championship, a five-day tournament pitting the nation’s biggest arena polo stars against one another. The world’s top-ranked arena polo player, Tommy Biddle, would be competing, and his team was decidedly the one to beat.

It wasn’t long before we learned that Mr. Kampsen hadn’t been joking about the blood. Because arena polo confines the riders and their horses into such a small space, injuries are unfortunately abundant. At one point, an umpire found himself caught in the painful crossfire of Mr. Kampsen’s swing. Later, player Felipe Viana got whacked on the hand by another rider’s mallet. At one point—worst of all—Mr. Kampsen’s horse took a fall and Mr. Kampsen went tumbling down with it. The injured horse had to be led, limping, out of the arena. This was less Prince Harry, more Gladiator.

The players said they were used to dealing with people’s misconceptions about their sport. Like what, we wondered?

“That it’s elitist,” Mr. Kampsen concurred. “We’re just regular guys, on and off the field.”

If the brutal skirmishes weren’t thrilling enough, the match was tied 15-15 by the end of the fourth chukker. Like in regular-season hockey, the winning team would be decided via shoot-out. To the surprise of the riled-up spectators, Mr. Biddle’s favored team came up short, and victory fell to Mr. Kampsen, Mr. Viana and Robert Ceparano.

There was neither a champagne toast nor a luxurious East Hampton after-party. We climbed off the bleachers and headed back to Manhattan, our boots dirtier than when we arrived. 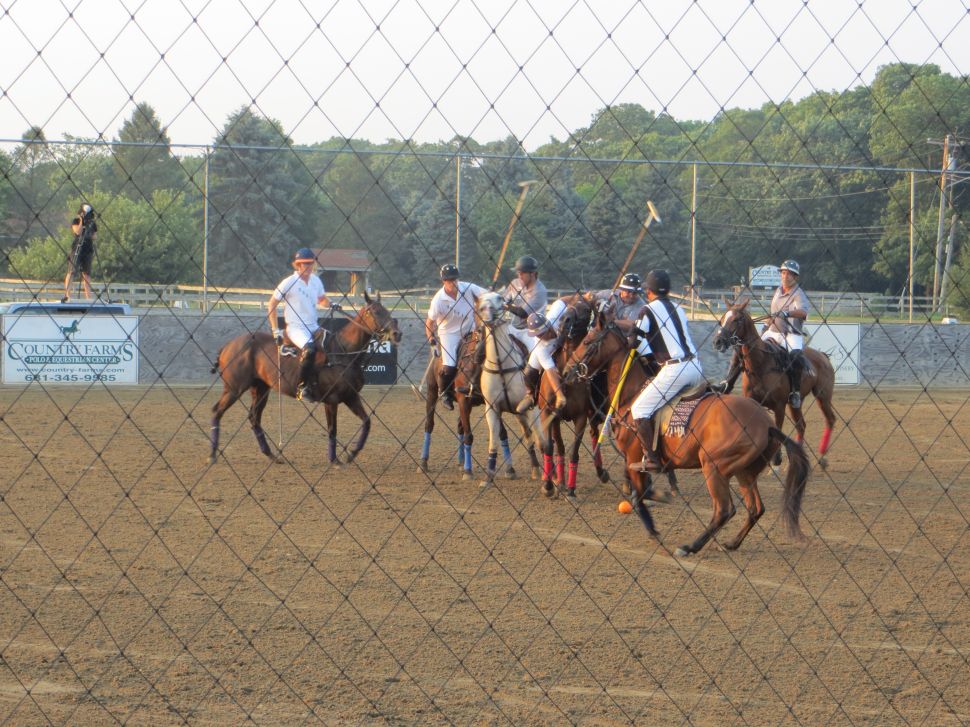