First he came after the cigarettes. Then the trans-fats. Then the super-sized drinks. Now, Mayor Michael Bloomberg is coming after the elevators.

City officials announced a new initiative this afternoon aimed at encouraging office workers to take the stairs instead of waiting for the elevator. Under legislation proposed by the mayor, all new buildings and buildings undergoing major renovation would be required to give occupants access to at least one stairwell, as well as post signs near elevators pointing to nearby stairs.

Another bill would increase the visibility of stairwells by permitting the use of hold-open devices on doors that would close automatically in case of an emergency.

“Whether you’re tall or short, fat or thin, you’ll be healthier and you’ll live longer if you’re more active. But the problem is we’ve been lulled into a sedentary lifestyle,” said Department of Design and Construction Commissioner David Burney at a Manhattan press conference at The New School. In too many buildings, the stairs are hard to find, kept locked, armed with alarms, or dark and windowless–making people afraid to use them, Health Commissioner Thomas Farley said. The programs are designed to change that, he said.

As part of the effort, officials also announced the creation of the “Center for Active Design,” a non-profit organization that will be tasked with finding ways to design healthier buildings, promote public transit and create more inviting outdoor spaces for activity. Mr. Bloomberg also announced a new executive order requiring all agencies to use these strategies when performing new construction or major renovations.

Mr. Bloomberg, who said he personally almost always uses the stairs–and doesn’t stand still when he’s on an escalator–said that part of the challenge was to make being active hipper for young people across the city.

“What we’ve got to do is just make it cool–if you will–or socially more the norm to exercise, and that’s what you see here,” he explained. “The whole idea is not to change what you have to do, but to give you the idea and the impetus to do something that is in your best interest.”

And–seemingly anticipating more headlines decrying his nanny state efforts—Mr. Bloomberg argued that they are in fact extremely popular, and one of the reasons why the city’s doing so well.

“Stop me when you get bored,” he added. “I mean, these are things that most people like.” 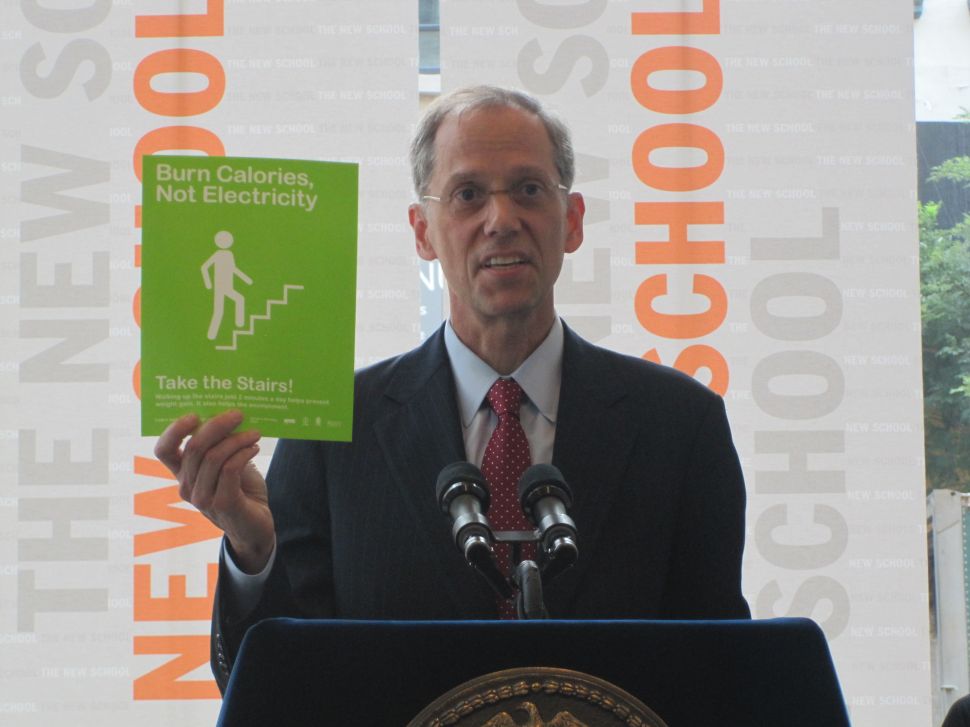