NUTLEY – Sen. Barbara Buono blasted the state’s governor Tuesday for “turning his back” on the New Jersey middle class and vowed to reinvest in the state’s working class if elected in November.

The Democratic gubernatorial hopeful argued that Gov. Chris Christie is “more out of touch with the middle class than Mitt Romney” was in the last presidential election, telling a small group of Nutley residents and elected officials today that Christie is more concerned with protecting New Jersey’s richest.

“How could I not run? Look at the shape our state is in,” she said.

Buono discussed her economic plan she rolled out less than two days ago that would, among other things, redirect business tax credits to small business.

“We need to redirect our tax credits to where they will be the most effective,” she said, calling Christie’s $2.1 billion in tax credits to large corporations largely a failure.

“I didn’t think the Republicans could find anyone who is more out of touch with the middle class than Mitt Romney, but they did,” said Buono, adding the governor’s trickle-down economic policies have hurt the state.

Buono, who is lagging in the polls, took a shot at the governor for his “New Jersey comeback” slogan. She said that believing in such a statement is akin to putting one’s head in the sand.

“It isn’t a comeback, it’s a catastrophe,” she said, citing the state’s higher than the national average unemployment.

“There’s a whole other New Jersey that needs to be rebuilt,” she said.

Buono spoke at the Nutley home of Assemblyman Ralph Caputo, (D-28), where more than a dozen residents and officials gathered to hear about the lawmaker’s economic plan.

“It’s our obligation and our responsibility to fight as hard as we can,” said Caputo, adding “things can change very quickly” and that it’s too soon to predict who will clinch the November race.

“For people to predict one way or another at this point is a little premature,” he said. 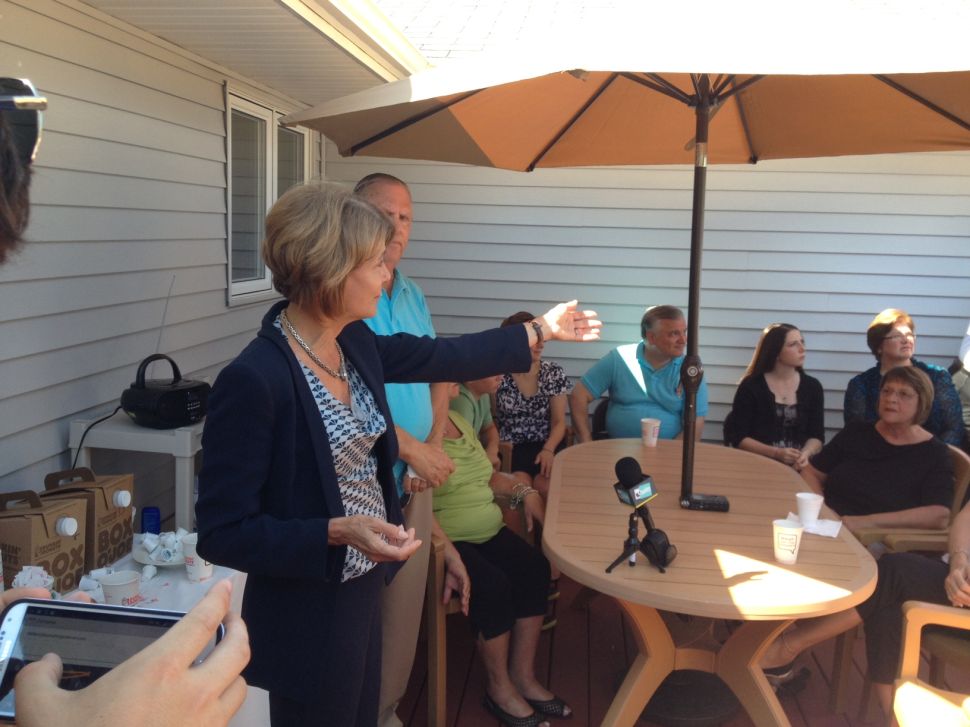