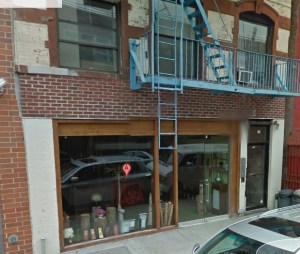 Bureau, the enterprising Lower East Side gallery that has operated out of a roughly 250-square-foot space on Henry Street since 2007, is moving. Owner Gabrielle Giattino told The Observer today that they are in the process of renovating an 1,800-square-foot space at 178 Norfolk Street, between Stanton and Houston, next to the Angel Orensanz Foundation’s Gothic Revival home and just around the corner from Participant Inc. It plans to open there in the fall.

“It’s definitely a lot bigger than what we’ve been dealing with,” Ms. Giattino said with a laugh. Bureau, which works with artists like Erica Baum, Ellie Ga, Matt Hoyt, and Julia Rommel, had been looking for a larger space about a year. A friend tipped them off to the former flower shop, which has vaulted brick ceilings and a small back garden. “It has such a great feeling,” added said. “We had seen so many spaces, and just walked in, and I wanted to make an offer right away.”

Tom Holmes’s third one-person show with the gallery will inaugurate the location. He had his first show, “Silly Rabbit: a gravestone and an urn,” at the old space in 2010, when the gallery was run under the name Dispatch by Ms. Giattino and artist Howie Chen.

Mr. Holmes’s work often takes the form of sculptures that render the traditional objects of cemeteries and funerals, like urns and gravestones, in unusual and sometimes humorous ways. It sounds like he will be taking full advantage of the larger space. “He’s actually buying a funeral home and a graveyard in Tennessee to work in and to make this kind of Gesamtkunstwerk,” Ms. Giattino said. “He’s really taking it all the way.”