The party at Willoughby’s Camera Emporium Fifth Avenue store to celebrate the launch of Hasselblad’s Lunar camera was one of those New York semi-star-studded affairs. Some of the past cast of Bravo’s Real Housewives of New York was there—Alex McCord and her husband, Simon, as well as Bobby Zarin—and Paul Johnson Calderon, who appeared on the short-lived CW show High Society.

For those who prefer real stars, astronaut Buzz Aldrin was there too, celebrating the update of the original camera that captured the first look at the lunar landscape. He was in some of those photographs. He reminded us all, “We owe Neil Armstrong a lot of praise for his beautiful photography—mostly of me.”

He was also there to tell The New York Observer that he would like us to get out of town. Way out of town. To where the real stars are.

And he thinks we should go there soon. “In the not too distant future,” he explained, “humans will begin to permanently occupy another planet in the solar system.”

Of course, colonizing space may be a less intimidating prospect for Buzz Aldrin than it is for . . . almost anyone else. On July 20, 1969, Mr. Aldrin became the second man to walk on the moon, immediately following Neil Armstrong. While Armstrong announced that it was “one small step for man, one giant leap for mankind”, Buzz Aldrin more poetically murmured, “Beautiful, beautiful, magnificent desolation.”

That statement may have made it sound as though the moon is a bit like New Mexico in August.

In recent years, Earth has proved anything but desolate for Mr. Aldrin. He has become an icon for a new generation, cha-cha-ing on Dancing with the Stars, yelling at the moon on 30 Rock, and performing in a video with Snoop Dogg.

And, of course, there’s the animated movie Toy Story.

“You’ve heard of Toy Story?” Mr. Aldrin asks, “You know who the real Buzz is? That’s my Twitter. I hate to tell you this, but Buzz Lightyear’s name used to be Lunar Larry.” Buzz is better.

The astronaut is not alone in thinking we should go to Mars. Elon Musk, the co-founder of Tesla Motors, recently said, “Either we spread Earth to other planets, or we risk going extinct.”

“Look,” says Mr. Aldrin, “People are going to die sooner or later. Unfortunately, that’s the way it is. I wouldn’t be so dire as to predict an [imminent] earth catastrophe. It could happen now or in a million years. But it’s a good thing to have two planets humanity can live on.”

Astrophysicist Neil deGrasse Tyson concurs, claiming, “Any time an Apollo-era astronaut steps forward with ideas for our future in space, it’s time to stop whatever we’re doing and pay attention.” Another noted physicist and cosmologist, Stephen Hawking, believes we will eventually establish self-sustaining colonies on Mars and other bodies in the solar system, but not within the next 100 years.

Mr. Aldrin thinks we can travel to Mars sooner, hopefully within the next 25 years. But that doesn’t mean it will be an easy process. Although Buzz notes that there has been more research about Mars than had been done on the moon when he went there, the public may not be as enthusiastic about this new voyage.

And Mr. Aldrin claims there are people who are eager to go. The only problem is that once they’ve reached Mars, they likely won’t be able to come back.

“There’s a company called Mars One that is advertising for people who would go to Mars and stay. They have had 78,000 people volunteer. People who go to Mars will go down in history as modern pioneers. Though they will not be as important as the President who sends them there.”

Mission to Mars (the title of Mr. Aldrin’s recently released book) may be a way off, but trips into space are expected to begin as early as 2014. Space travel promises to be a booming business. Virgin Galactic, an offshoot of London-based Richard Branson’s Virgin Group, is believed to have already collected about $40 million in deposits for rides into zero gravity that currently cost $250,000 per person. A bidder at a recent AmFar auction paid $1.5 million to accompany Leonardo DiCaprio into space on one of the first Virgin Galactic flights scheduled, which seems like an odd way to hang out with a celebrity.

Without Leo, would space travel really be that much fun? The description of the Virgin Galactic ride euphorically claims, “There is no up and no down, and you’re out of the seat experiencing the freedom that even your dreams underestimated.” Meanwhile, Mr. Aldrin likens going into space to scuba diving, recalling, “I was a scuba diver, and that made me [comfortable] as an astronaut. It’s a very enjoyable sensation.”

And back on the ground, where servers wearing space helmets offered lychee “moontinis,” what does Buzz Aldrin love best when he is in New York?

Skip the astronaut ice cream. Maybe it’s best to stay on Earth until they start stocking those shuttles to Mars with crêpes à la crème. 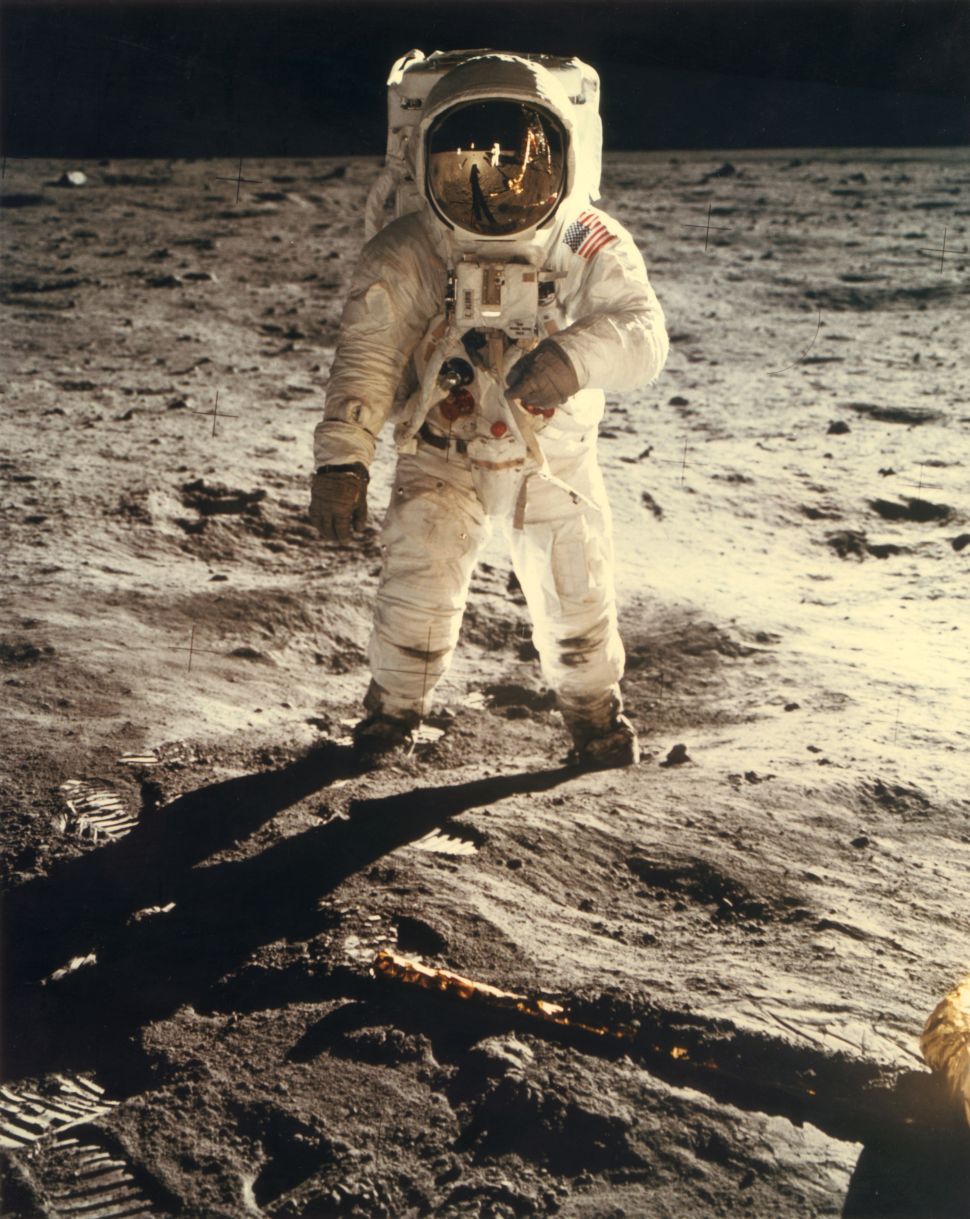