BELMAR – The black SUV vehicle pulled up in front of the surf shop on another weird weather day in this seafront town laid flat last year by Hurricane Sandy.

Christie clutched him as close range bulbs popped, framing the GOP governor and Democratic mayor in a bipartisan bear hug reminiscent of an after Sandy Obama landing and grin-gripping Christie.

Once a legislative aide for Christie’s opponent, state Sen. Barbara Buono (D-18), and still a Buono backer, Doherty hardly looked in a resistant mood as he welcomed a campaign-rampaging Christie to his town.

Echoes of the much critiqued Christie’s own explanations for his reception of Obama during a campaign contest – “What was I supposed to do, wear a Mitt Romney T-shirt on the boardwalk” – came to mind.

Monmouth County Democratic Chairman Vin Gopal, who’s watched Christie uproot – like so much shore grass – the likes of Long Branch Mayor Adam Schneider and Sea Bright Mayor Dina Long from the auspices of the County Democratic Party – said there was no point whatsoever in chastising Doherty.

“Barbara Buono marched with Mayor Doherty in the St. Patrick’s Day Parade,” Gopal said. “The governor comes to town, I don’t see anything wrong with the mayor welcoming him. He’s a Democrat and he supports our ticket 100%.”

But as the governor strode into Eastern Lines Surf Shop to congratulate the business owner on his participation in the Stronger NJ Business Grant Program, Doherty filled out the image of bipartisanship at work, the local Chris Christie to Christie’s statewide version of Obama – a dominant Christie campaign message.

The locals loved it, despite the strange atmospherics.

His face half shadow and half brilliant sunshine, a man in the crowd looked like two sides of a coin welded together.

“The weather,” he grunted.

Prodded, he said he’s had to shutter his business four days in June – a record, he said; all because the weather doesn’t know if it wants to rain or exude beach-friendly warmth.

Doherty confirmed as much when he spoke to PolitickerNJ.com.

“People are skittish about coming here because of the weather forecast,” he explained.

If he stood sideways, the mayor might catch a torrential rainstorm. As it was, his shoulders jutted in sunlight.

“We should have good weather the next couple of days and we want people to come to the shore,” Doherty said.

Leaving the shop, Christie prepared to press onward, up the shore, to Long Branch, for another grant presentation, this time alongside Mayor Schneider, who’s endorsed him. 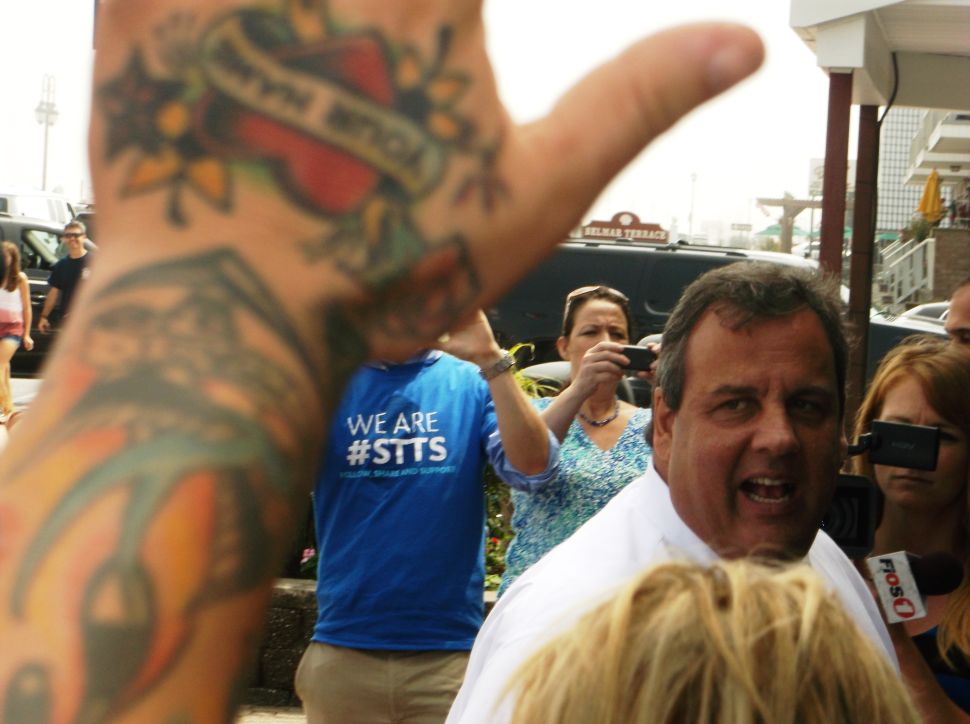