LITTLE FERRY – Steve Lonegan wants to drum the message that Cory Booker is a failed mayor of Newark.

He went to Newark to make his case, and at his campaign headquarters opening over the weekend, vowed to send Booker home to his parents in suburban Harrington Park.

But Gov. Chris Christie – who has worked arm in arm and across the aisle with Booker – refused to back up Lonegan’s critique, and outright disagrees with a comment made by Lonegan’s GOP Primary opponent on the condition of New Jersey’s biggest city.

“Mr. Lonegan is going to say what he’s going to say in the primary,” Christie said. “I’ll let the Republicans of New Jersey decide. We don’t even know that Mayor Booker is going to be the nominee. He’s in the middle of a spirited campaign.”

A reporter asked the governor if he agrees with Dr. Alieta Eck’s comment that Newark is the Detroit of New Jersey.

Eck is opposing Lonegan in the Republican Primary for U.S. Senate.

“No,” Christie said in response. 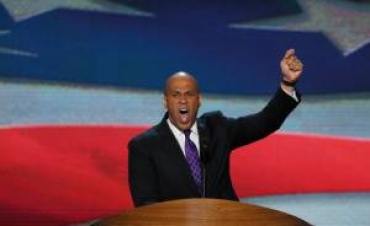