As a new poll shows her again leading the mayor’s race, Council Speaker Christine Quinn’s campaign is going up on the air with the first ad of the Democratic primary.

And Ms. Quinn is making it abundantly clear that she’s not interested in ceding the “middle class” mantra to her top rival, former Congressman Anthony Weiner. “While others talk about fighting for the middle class, I’ve been doing it,” she accordingly declares in the commercial.

The press release described the purchase as a “significant network and cable television ad” and sources told the Daily News it would be running on “the four local network affiliates and cable channels such as CNN,” but it’s not immediately clear how big of an investment was made.

In a statement, Quinn campaign manager Matt Tepper said the ad is part of their strategy of “getting our message out early and regularly.” 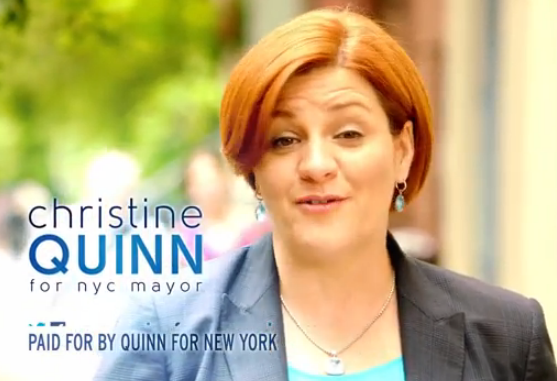