Critics have long accused City Council Speaker and mayoral contender Christine Quinn of using the city budget to reward friends and punish those who’ve crossed her. But, perhaps in light of increased scrutiny and criticism from her rivals, this year’s allocations track closely with last year’s. Still, being a Quinn ally appears to have some definite perks.

An analysis of the 2014 budget numbers, crunched by the Citizens Union Foundation, finds that members who endorsed Ms. Quinn for mayor were especially likely to receive large allocations for their districts–receiving, in essence, the largest slices of the $594 million pie.

For instance, seven of the nine members who declared their support for Ms. Quinn thus far placed on the top-half of the ladder in combined expense and capital funding, versus just two who fell in the bottom half.

Sliced another way, four of the top-10 recipients–excluding Ms. Quinn–had formally endorsed her candidacy. (Republican Councilman James Oddo, who won’t endorse in the Democratic primary but said  his “heart” was with Ms. Quinn, placed ninth.)

Excluding capital projects and only looking at the expense budget yields the same results; eight of the nine Quinn endorsers placed in the top half of overall allocations, versus just one supporter who placed in the bottom half of the rung. Of the top 10 recipients overall, four endorsed Ms. Quinn.

Critics have long predicted that council members opposed to Ms. Quinn would be reluctant to endorse her opponents before the budget was finalized to prevent jeopardizing their cut of the millions in pork for local projects. But those who did endorse Ms. Quinn’s opponents don’t appear to have suffered any punitive cuts.

Ms. Quinn’s office also noted that, when it comes to increases and decreases compared to last year’s expense allocations, Ms. Quinn’s supporters faced a mixed bag, with about the same number receiving above-average bumps as below-average ones.

“There is no evidence in the allocation of member items that suggest anyone did better than the next based on political allegiance,” her spokesman, Jamie McShane, said in a statement. “Five members who have endorsed Chris Quinn saw their allocation rise above the average and four saw a below average change in their allocation.”

Regardless, the big winners in this year’s allocations were Finance Committee Chair Domenic Recchia, with $10.29 million in funding for his district, Education Committee Chair Robert Jackson with $10.27 million, and Ms. Quinn herself with $10.16 million.

Among the biggest losers were Brooklyn City Councilwoman Diane Reyna with just $900,000, Queens Republican Dan Halloran, who is facing fraud charges for allegedly piggybacking a scheme to get Malcolm Smith on the mayoral ballot, with $2.1 million, and Brooklyn’s Vincent Gentile, with $2.98 million. Ms. Reyna is a Quinn endorser.

The money, which has long been criticized, is used to pay for local projects, like after-school programs and school improvements.

Public Advocate Bill de Blasio, one of Ms. Quinn’s mayoral rivals, doubled down on his call for reforms to the member item system

“It’s another example of a broken process where Speaker Quinn uses member items for political means,” he said in a statement. “We need to abolish the current member item process and take the backroom deals and political calculus out of the way we fund non-profits and community groups.” 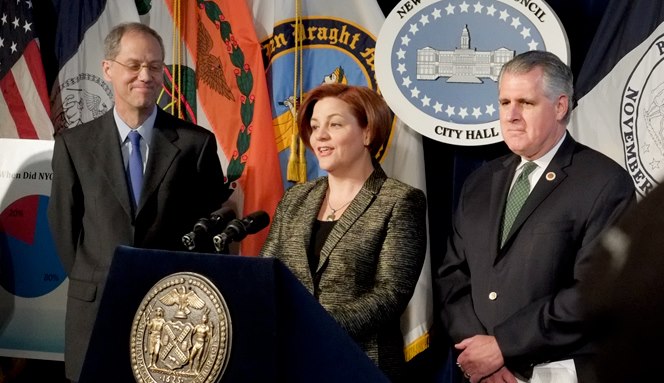