LAMBERTVILLE – Positioned as the veteran progressive in the U.S. Senate race with a message of accomplishments and a cautionary tale about Democrats with less than stellar progressive credentials, U.S. Rep. Frank Pallone (D-6) walked this riverside town Friday night with longtime ally Mayor Dave DelVecchio.

Pallone said if one examines his record, he or she will find that when he couldn’t get it all – single payer healthcare in the ’90s and during the Obama era, for example – he respectively helped secure the State Children’s Health Insurance Program, and Obamacare.

He also points to his ability to go farther on issues with the bipartisan support of Republicans, citing his work not only on Superfund cleanup in New Jersey but on drawing attention and securing funding for brownfields restoration, and slammed rival Newark Mayor Cory Booker as a less than forceful Democrat.

Still, in a four-person Aug. 13 Democratic Primary in which the Twitter-maniacal Booker leads by as many as 40 points in some polls, Pallone must labor to connect with the next generation of voters statewide.

“There’s a primary? I heard about that,” a woman said when Pallone approached her in front of a restaurant.

In an interview with PolitickerNJ.com last week, Pallone’s other rival in the contest, U.S. Rep. Rush Holt, (D-12), suggested that Pallone had his chance in 2002 during the 12 days of Torricelli.

The congressman from Monmouth County says he believes his time is now.

“I felt at the time that Senator Lautenberg was the strongest candidate,” Pallone said. “He was so well known, which he proved when he easily beat Doug Forrester.”

In an open summer primary, the congressman said he believes the voters will respond to direct contact, and in that vein, he sought the attention of nearly everyone he and Del Vecchio saw in the streets as they walked through Lambertville.

DelVecchio, incidentally, once defeated Holt in a Congressional Primary in the ’90s.

Now he wants Pallone to beat Holt – and Booker.

“I think those campaigns say a lot about what I believe and what I feel is important,” he said. “We are up against Republicans in Congress who are ideologues. They don’t believe in government. Anna Little, for example, advocated abolishing the Department of Education. I really believe government can make a positive difference in people’s lives and I have shown that I can work with mainstream Republicans to get things done.”

He did object – as he has before, notably in an interview with Brian Lehrer on the second week of his candidacy – to what he says is Booker’s inability to advance his side of an argument with Republican Gov. Chris Christie. Pallone contrasted his record of building consensus off of his stands on environmental and healthcare issues with Booker’s, who he says has allowed Christie to define the terms and conditions.

“I don’t see that his relationship has effectuated policy changes,” Pallone said. “Booker has not persuaded Christie not to veto minimum wage, for example, or marriage equality and funding for women’s health.”

Pallone also characterized Booker as “too close to Wall Street,” citing Booker’s Meet the Press rush to the defense of Bain Capital during the 2012 Presidential Campaign, when the mayor was ostensibly serving as a surrogate for the Obama Campaign. 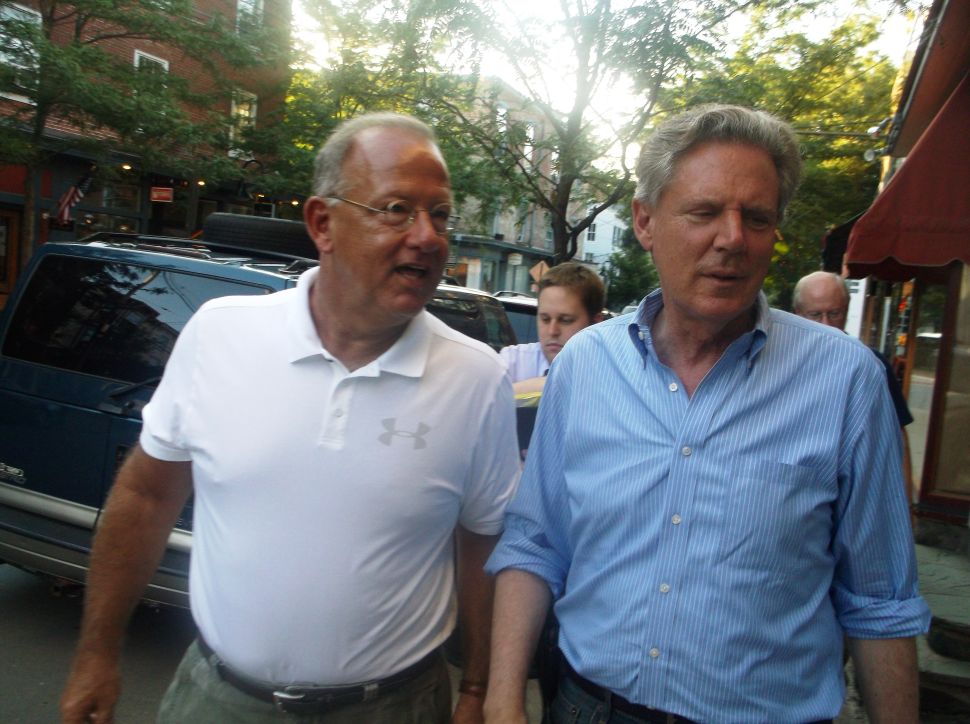