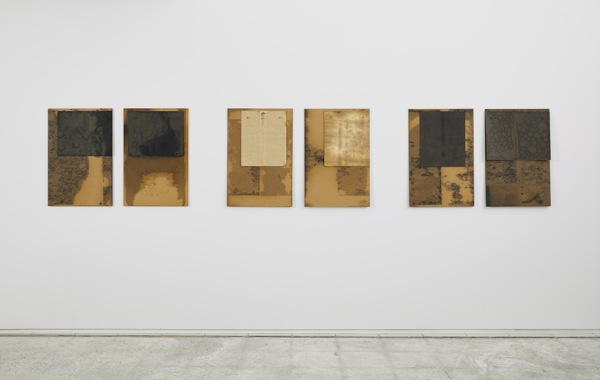 Works from 1970 by Dorothea Rockburne. (Courtesy the artist and Miguel Abreu Gallery)

As the Abreu Gallery prepares to expand into large loft spaces nearby, it’s examining its longtime home and, by showing art that uses and abuses objects of industry and commerce, the continuing evolution of the Lower East Side neighborhood that surrounds it, in this rough, elegant group show.

Curators Leah Pires and Johanna Bergmark have chosen a title that riffs on a line of Heidegger about tools that are rendered no longer functional, an idea reflected in Rey Akdogan’s piece, which consists in her having ripped out most of the gallery’s trademark tile floor. All that remains are awkwardly shaped slivers at the margins and a ghostly grid, harking back to the building’s prior states, as a dumpling shop and a Buddhist temple.

Steel sheeting conduits designed in 1967 by the heroic late German artist Charlotte Posenenske also look like a bit of remodeling: they climb from the floor to a wall and then up the taller half of the gallery, mapping the unusual space while impersonating a construction that could be used to carry air or conceal pipes or ductwork. 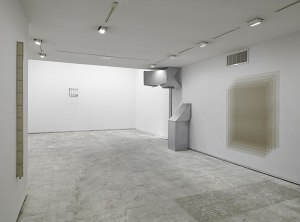 Some work feels painfully obvious, like Olof Inger’s one-liner of a geometric abstraction, Do You Remember? (2013), which he made by overlaying rectangular sheets of dirty plastic garbage bags found at a demolition site in Sweden, and Cameron Rowland’s U66 (2013), part of a shelving support system used at low-end retail stores. (Is anyone working on a show about the recent vogue for art using garbage and recycling?)

But other artworks more than compensate. Gabriel Kuri has propped black marble countertops up against the wall and crushed two energy-drink cans between them. The piece’s weird, latent sensuality is underscored by its title: Two nudes two points (2013). And Jean-Luc Moulène, as is his habit, fashions a remarkably rich sculpture out of a bare minimum of material: just a few rods of bent steel, inventively framing the space.

But the real prizes here are six majestic studies by Dorothea Rockburne that she made by soaking slices of chipboard and paper in oil and then nailing them to the wall as preparation for her 1971 Scalar, which will be shown in her Museum of Modern Art survey in September. They’re filled with a virtuosic variety of intimate marks that look rubbed, dripped, soaked and burned. The piece could have been made yesterday. As in all of the work here, the intended functions of its materials have been canceled, transmuted into art. They’re unusable, but not useless. (Through Aug. 17, 2013)