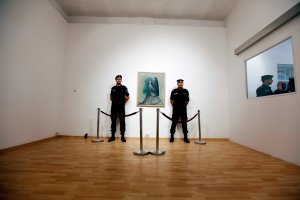 A still from the video for Hourani’s ‘Picasso in Palestine,’ 2011. (Courtesy the artist)

Artists Khaled Hourani and Laurie Jo Reynolds have been named the winners of the 2013 Leonore Annenberg Prize for Art and Social Change, an annual award presented each year at the Creative Time Summit. This year’s prize comes with a $15,000 award for each artist, and will be given at the Summit in New York on Oct. 26 at NYU’s Skirball Center for the Arts.

Mr. Hourani, who is based in Ramallah, on the West Bank, is probably best known for his 2011 project with filmmaker Rashid Masharawi “Picasso in Palestine,” which involved displaying an original work by Picasso in the West Bank for the first time in history. It featured prominently in last year’s Documenta 13 in Kassel, Germany.

Ms. Reynolds, who lives and works in Chicago helped start Tamms Year Ten, a program that lobbies on behalf of prison reform, and her work often examines correctional facilities and the lives of the incarcerated.