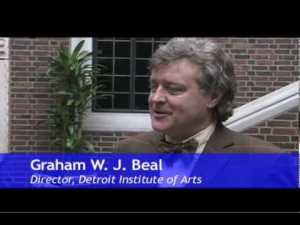 In a letter to The New York Times, Graham W.J. Beal, the director of the Detroit Institute of Arts, has a swift and rational response to the media’s quite sensational take on the possibility of the museum selling its collection to help pay off Detroit’s multibillion-dollar debt. It’s worth reading in full, but here’s the kicker:

“After two months of hectic coverage, I call upon journalists to resist the temptation to jump to disaster scenarios or to make the D.I.A.’s singular and highly complicated situation part of a broader story about the structural challenges faced by museums in general.”

The letter is in response to a July 24 article in The Times, titled “The Death of a Museum,” which places the D.I.A. in a league with the Fresno Met, which closed in 2010, and the financially strapped South Street Seaport Museum in Manhattan. “To compare the thriving Detroit Institute of Arts with the shuttered Fresno Metropolitan Museum of Art and Science and the existentially challenged South Street Seaport Museum is, to say the least, a stretch,” Mr. Beal writes.

He also calls attention to a formal statement from Michigan’s attorney general expressing the belief that the museum’s holdings should not be sold.