NEWARK – It looked like the perfect set piece for a political food fight, but the Democratic Primary candidates for U.S. Senate refused to indulge in a gang-up of front-running Newark Mayor Cory Booker, and instead trained their sights on banks, namely the Bank of America, as they drew attention to New Jersey’s foreclosure crisis.

U.S. Reps. Rush Holt and Frank Pallone stood on one side of a power pyramid flanked by Booker and Speaker Sheila Oliver (D-34) on the other side, with Buono (D-18) a few steps up at the apex.

The Senate candidates all expressed support for Buono, trailing incumbent Gov. Chris Christie badly. She was the first among them to slap at Christie on the subject of state foreclosures.

There have been 88,000 foreclosures in the state since 2008, with twice that many in the pipeline due to a substantial backlog, according to New Jersey Communities United. The typical foreclosure costs local governments more than $19,000 for increased costs of safety inspections, police and fire calls, trash removal and maintenance. In New Jersey, these costs are estimated to be nearly $700 million.

“Having a home means something,” said Buono. “It means security. It means success.”

Christie, Buono said, let languish $300 million in federal funding allocated for New Jersey’s foreclosure victims. He only budged on the issue when a reporter questioned him, she said.

“It is time,” Buono said, “for Grace to stop suffering.”

Booker bashed the media, claiming that most of the reporters present at today’s event didn’t attend the last foreclosure presser because it did not occur in the middle of a U.S. Senate Primary.

“Today is not about the political spectacle,” the mayor said.

PolitickerNJ.com asked the other candidates if they felt comfortable speaking to the issue in Newark because it arguably gave them a backdrop of Booker’s specific record on the issue.

They refused to throw punches, as Oliver and the two congressmen cited big banks and Christie as the enemy in this case – not Booker.

“The banks caused the crisis in refusing to deal with the individual homeowners,” Pallone said. “The money is there.” The governor needs to distribute it to homeowners in need, he added.

“The banks say they’re about building community in their promotional materials – well, they ought to show it,” Holt said.

Oliver, who has scrapped with Booker in the past, made sure to re-emphasize that banks are the issue, not local government leadership.

Pallone did note that he would like to see more debates than the two – one TV and one radio – to which Booker agreed.

“I will fault the mayor for that,” the congressman said.

The presence of Rice and Sharif in the final days of decision time for Buono on her lieutenant governor choice caused a ripple of questions.

But the newly engaged Rice hasn’t been approached, sources say, and the candidate is down to four finalists for the job, whom she is interviewing this week in preparation for an announcement likely as early as next week. 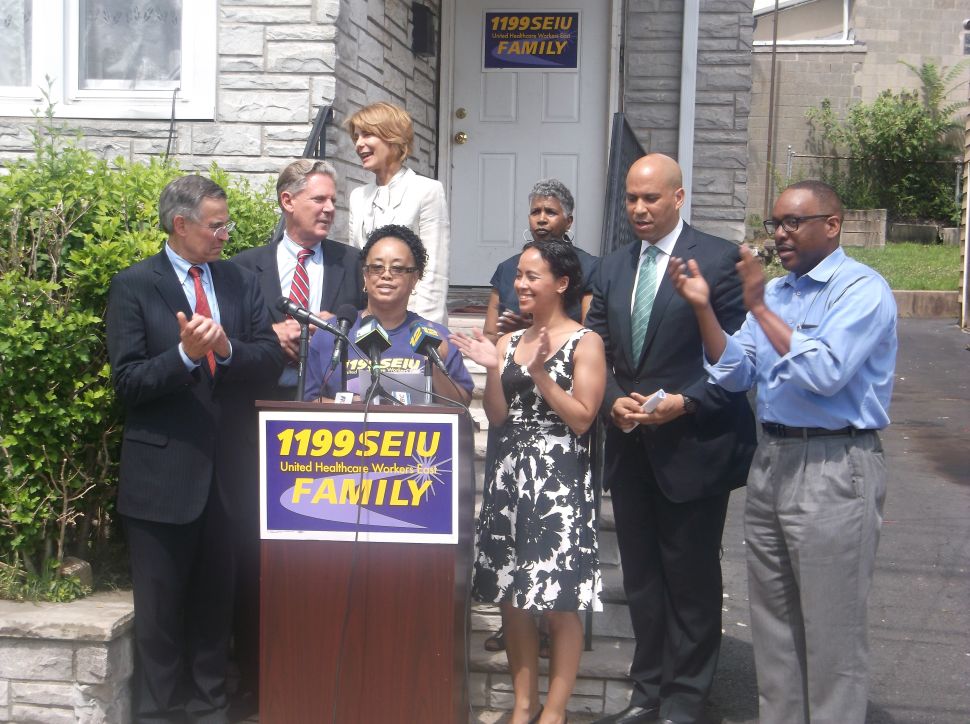