If you spend so much time staring at backlit screens all day that your actual, physical eyeballs hurt, it’s time to go outside for a rousing game of kickball. Either that, or you could buy a musical eye-massaging headset to alleviate the pain.

Manufacturers “claim that the vibrating headset can alleviate puffiness, dark circles and the stinging sensations caused by straining your eyes when reading texts and sending emails,” the Daily Mail reports.

The headsets aren’t just intended for those whose eyeballs are exhausted because of too much screen time. But sales for the mate-repelling headgear are “up 30 per cent,” one Taiwanese manufacturer said, likely because of the popularity of such technology in Taiwan.

Competition in the eyeball-massage market is so fierce in Taiwan, some are adding mood lights and music to coax customers into buying their products, the Mail reports. Add a camera and these headsets are more-or-less the poor man’s Google Glass, although they’re somehow even nerdier-looking than face computers. 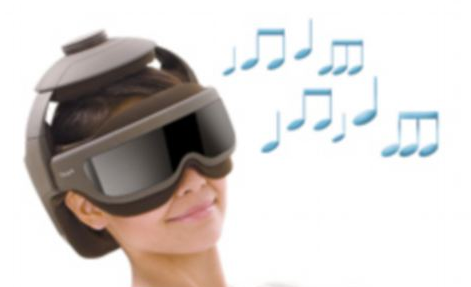