Rutgers Professor Alan Rosenthal, an expert on state government who two years ago served as the tie-breaking member of the legislative redistricting team, died last night.

Earlier this summer, Rosenthal announced his retirement from Rutgers effective Sept. 1 due to his battle with cancer.

Rosenthal was a renowned expert on government and authored eight books on democracy and legislatures.  In 1992 and 2001, he served as the tie-breaking member of the Congressional redistricting team and he held the same role for the legislative reapportionment commission in 2011.

In 1990 he was asked to chair the Ad Hoc Commission on Legislative Ethics and Campaign Finance – known as the Rosenthal Commission.  The commission made several recommendations, including contribution limits for all state and local candidates, creation of legislative leadership committees, restrictions on the use of campaign funds and full disclosure of lobbyist expenditures.

In 1993,  many of those recomendations were introduced in the legislature and later signed into law by Gov. Jim Florio.

Rosenthal was a mentor to a generation of state politicos who came through the Eagleton Institute.

Rosenthal served in the Army after receiving his undergraduate degree.  After leaving the armed forces, Rosenthal headed to Princeton.  His first job upon leaving the Ivy League school in 1966 was with Rutgers, where he would remain until last spring.

One former student, attorney Bill Palatucci, who served on the 2011 Republican redistricting team, said Rosenthal had a huge impact on his life.

“Knowing Alan for more than 30 years going back to my days as a student at Eagleton, his love for the study of politics and government was deep and infectious,” Palatucci said.  “We disagreed on much, but it was always on substance and with respect, humor and his usual good nature.  He was a true treasure for Eagleton, Rutgers and New Jersey.”

“Alan was a true New Jerseyan,” Christie said. “He loved our state and committed much of his life to the study of its political institutions. He also leaves a legacy of thousands of students who studied under him at Rutgers and consider him a mentor and friend. New Jersey has lost a great advocate and, on behalf of the people of our state, I offer condolences to the Rosenthal family.” 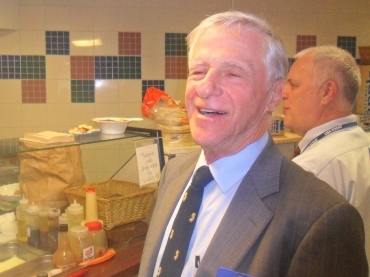