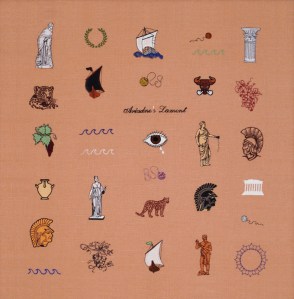 The artist Elaine Reichek has joined Zach Feuer gallery, The Observer has learned.

Ms. Reichek (b. 1943) is a conceptual artist who mostly works with thread and tapestry. You may remember her embroideries from in 2012 Whitney Biennial, or may have seen her other work at her many shows at Nicole Klagsbrun Gallery, which used to represent her but recently closed.

Ms. Reichek will have a solo show at the Jewish Museum this fall, “A Postcolonial Kinderhood Revisited.” Her first show at Zach Feuer is scheduled for fall 2014.