Disgraced former Governor Eliot Spitzer, who announced his surprise plans to jump into the comptroller’s race earlier this evening, says he’s in it to win it.

“I would not be in this race if I did not think I could win, if I did not think that I could look every voter in the eye and say, ‘I want to work for you. I’d like to be comptroller of the City of New York’ and make a persuasive argument,” Mr. Spitzer told Politicker in a phone interview hours after upending what had once been an uncontested race for one of the city’s least glamorous jobs.

Mr. Spitzer was forced to resign five years ago in the wake of a prostitution scandal, after he was revealed to be “Client #9.” But, like former Congressman Anthony Weiner, whose own comeback campaign has surged in the mayor’s race, he hopes voters can look past his indiscretions and focus on the job.

“Look, people will focus on it. For some period of time, they will ask questions about that. And I hope at a certain point shortly we will move forward to a conversation about the substance of the office. And I’ve said that I welcome any conversation with any voter about any issue,” he said, echoing words that Mr. Weiner has frequently repeated on the trail.

But, despite the nearly identical refrain, he insisted Mr. Weiner’s entry in the mayor’s race had no bearing on his choice.

“I don’t see any parallels between that race and this one, any candidate there and here,” he said. “Each race is different. Each candidate is different. And I am looking forward to making my case to the public.”

Before tonight, Scott Stringer had been expected to sail to victory in the Democratic primary after his early challengers decided to drop their bids. But Mr. Spitzer insisted his candidacy was not a shot against the Manhattan borough president.

“I’m not in any way passing judgment on Scott by getting into the race. Politics is a game of–the process of democracy is competitive, and it permits the public to choose among candidates, sometimes all of whom are superbly qualified,” he said. “I view Scott as a friend, always have. But I had primaries when I ran for attorney general, when I ran for governor. Primaries are good. They’re part of democracy.”

Still, Mr. Spitzer said he’d made the decision to jump into the race within the past 48 hours—just days before the official petitioning deadline.

“I looked at the office, thought deeply about the office, thought about the skills that I have to offer and said,’ This is a position I would love to be able to fill as public service, which I desire.’ It has been five years since I resigned. I’ve asked the public’s forgiveness. I will continue to do that. And I am hopeful that the public will feel somewhat interested and kindly toward my seeking this position,” he said.

Mr. Spitzer, who has long eyed the comptroller’s office, further reasoned the position’s “potential is untapped.”

Of course, at this point, Mr. Stringer has already racked up a slew of endorsements from labor unions and elected officials, many of whom took to Twitter late Sunday to re-affirm their support for his candidacy. But Mr. Spitzer insisted he’s never cared much about endorsements–while suggesting that some might be willing to change their minds.

“I suppose I’ll only observe that a lot of these endorsements were made before he had competition. And that’s fine. And many of them come from people with whom I’ve worked, with whom I’m close. And I will sit down with them and say, ‘Hey, here’s why I’m running,’” he said.  “But endorsements don’t matter much to me. Voters matter to me … On September 10th, I don’t know any endorsement that goes into a voting booth to vote. It’s only voters.”

Mr. Spitzer said that he began only tonight making arrangements to send petitioners out beginning early Monday morning to collect the thousands of names he needs to secure by Thursday night to appear on the ballot. So far, his campaign team includes his long-time spokeswoman, Lisa Linden, and Neal Kwatra, who he said will be overseeing petitioning, with more names to be added “in due course.”

“The team will be there,” he assured, expressing equal confidence he’d make the petitioning deadline. “We’ll be working aggressively to do it. You know, I’ll be asking voters and commuters and everybody else.”

He also refuted suggestions made by some—including Manhattan Madame Kristin Davis, who said tonight she plans to challenge Mr. Spitzer in the race—that the inclusion of two sex-scandal-scarred candidates in the race would turn the city into a laughing stock

“Ah, no. I don’t think it’s the case,” he said, sternly. “And I think that we have a vibrant mayoral primary that is ongoing and I think that public is interested all of the candidates on both sides of the aisle.” 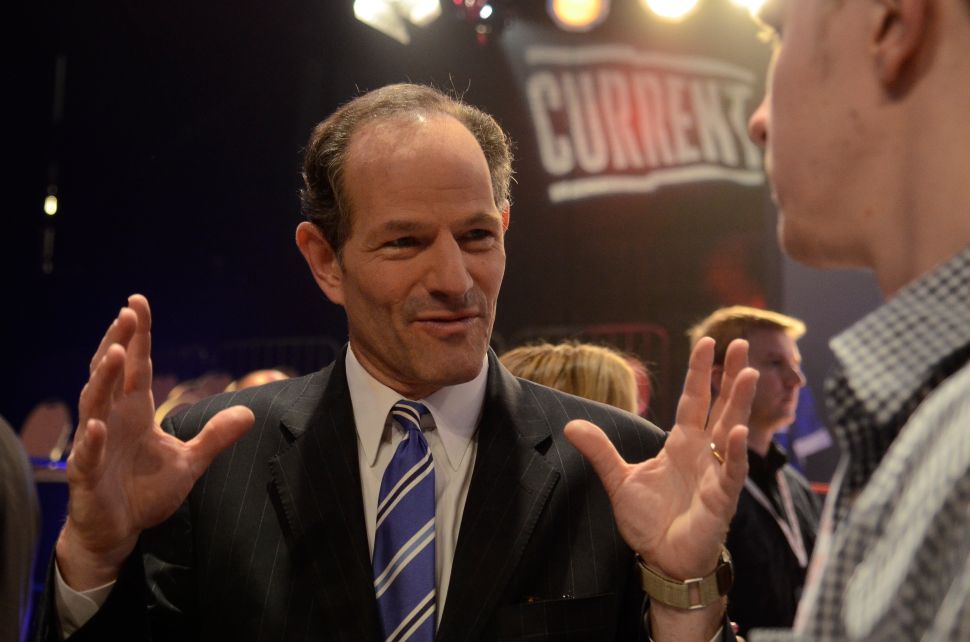